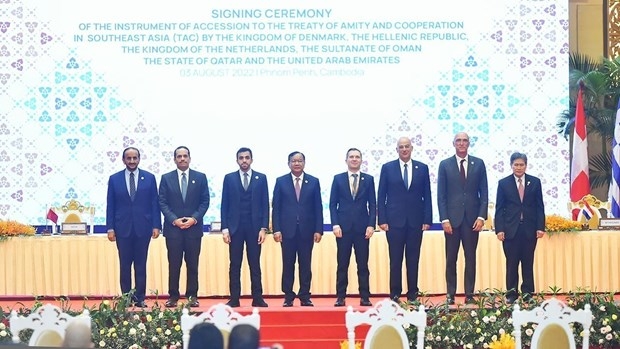 Representatives of ASEAN and the six new parties to the Treaty of Amity and Cooperation in Southeast Asia at the signing ceremony in Phnom Penh on August 3 (Photo: VNA)

NDO/VNA – Six more countries have taken part in the Treaty of Amity and Cooperation in Southeast Asia (TAC), raising this deal’s membership to 49.

Representatives from Denmark, Greece, the Netherlands, Oman, Qatar, and the United Arab Emirates signed the instrument of accession to the TAC in the presence of ASEAN foreign ministers on August 3, on the sidelines of the 55th ASEAN Foreign Ministers' Meeting (AMM-55) in Phnom Penh, Cambodia.

In his remarks, Cambodian Deputy Prime Minister and Foreign Minister Prak Sokhonn, who also chaired the AMM-55, said it was his country’s honour to host the signing ceremony.

Such a high number of parties shows the importance of the TAC in terms of its fundamental objectives and principles of promoting friendly multilateral cooperation and peaceful co-existence, he noted, calling on all acceding parties to make their utmost efforts to deepen their friendly ties and mutually beneficial cooperation with ASEAN as an organisation as well as with each individual ASEAN member state.

The TAC is a peace treaty signed in 1976 among ASEAN member states to establish a set of guidelines to govern inter-state relations in the region, promote perpetual peace, everlasting amity and cooperation based on mutual respect, non-interference principle, and peaceful settlement of disputes.