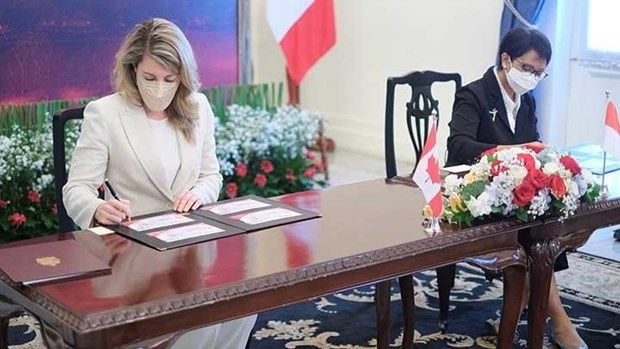 Indonesia’s Foreign Minister Retno Marsudi and Canadian counterpart Joly Melanie on April 11 inked the Indonesia-Canada Plan of Action for the 2022-2025 period that would serve as guidance for both countries to navigate the cooperation in the next four years.

Speaking at a press conference after talks with his Canadian counterpart, Foreign Minister Marsudi said the two sides welcome the increasing bilateral trade and focus on discussing economic cooperation.

To further strengthen bilateral trade, both countries already started the first round of negotiation of the Comprehensive Economic Partnership Agreement (CEPA) last month, she said, adding that they agreed to intensify the negotiations so the agreement to be concluded within a clear time frame.

Both countries are committed to accelerating the energy transition to progress towards achieving a net-zero emission future. They also agreed to promote cooperation on the transition to cleaner energy sources

According to Minister Joly, the two countries have pledged to strengthen bilateral relations in various aspects.