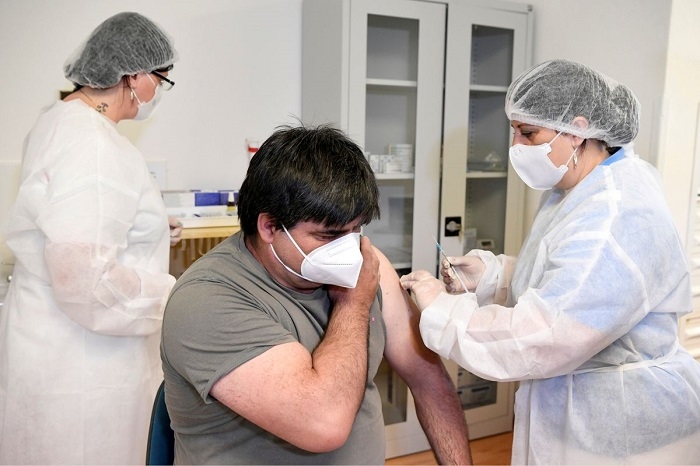 Slovenia reported a record 5,164 new COVID-19 cases on Tuesday, a 52% rise from a week before, amid the spread of the Omicron variant. (Illustrative Image/Photo: Reuters)

* Russia said on Tuesday it was not optimistic after a first round of talks with the United States on the Ukraine crisis and would not allow its demands for security guarantees from the West to become mired in tortuous negotiations.

* A Russian-led military bloc will begin withdrawing its troops from Kazakhstan in two days' time after fulfilling its main mission of stabilising the Central Asian country after serious unrest, Kazakh President Kassym-Jomart Tokayev said on Tuesday.

* Turkey welcomes the appointment of a new prime minister and the easing of tensions in Kazakhstan after countrywide violence last week, Foreign Minister Mevlut Cavusoglu told a meeting of Turkic states on Tuesday.

* Ukraine is ready to take the necessary decisions to end the war in the eastern Donbass region at a new summit of the leaders of Ukraine, Russia, France and Germany, Ukrainian President Volodymyr Zelenskiy said on Tuesday.

* The World Health Organization said on Tuesday more research is needed to find out if existing COVID-19 vaccines provide adequate protection against the highly contagious Omicron variant, even as manufacturers develop next generation shots.

* Only one in 10 World Economic Forum members surveyed expects the global recovery to accelerate over the next three years, a poll of nearly 1,000 business, government and academic leaders found, with only one in six optimistic about the world outlook.

* China's Tianjin said its latest outbreak had reached 49 confirmed cases by midday on Tuesday, as it battles the Omicron variant that has been detected in at least two other provinces.

* Nearly one million Hindu worshippers are expected to gather at the Ganges river this Friday and Saturday for a holy bathe despite galloping nationwide infections.

* The US Centers for Disease Control and Prevention (CDC) and State Department advised against travel to neighboring Canada, and the Washington Post reported that it is considering recommending better masks.

* More than half of the European population are expected to be infected with the Omicron coronavirus variant within the next six to eight weeks, the World Health Organization's top Europe official said on Tuesday.

* Canadian Prime Minister Justin Trudeau said on Monday the government has secured enough COVID-19 vaccine doses for all eligible Canadians to receive a booster as well as a fourth dose, according a statement from Trudeau's office.

* Poland's reported deaths surpassed 100,000 on Tuesday, as the country struggles to convince people to get vaccinated despite persistently high infection rates.

* Tennis champion Novak Djokovic on Tuesday warmed up for his bid to win next week's Australian Open, but could still be deported as the government argues he did not adequately justify a medical exemption from vaccination needed to enter the country.

* Preliminary findings from two South African clinical trials suggest Omicron has a much higher rate of "asymptomatic carriage" than earlier variants, which could explain why it has spread so rapidly.

* Spain's PharmaMar said trials made in vitro and on animals showed its Plitidepsin drug had positive antiviral effects on COVID-19 variants including Omicron.

* Global stocks edged up and bond yields clung to recent highs on Tuesday as investors awaited US Federal Reserve Chair Jerome Powell's appearance before the Senate Banking Committee, hoping for clues on the timing of expected policy tightening.

* Oil rose towards 82 USD a barrel, supported by tight supply and hopes that rising cases and the spread of Omicron will not derail a global demand recovery.

* The Biden administration plans to donate an extra 308 million USD in humanitarian aid to Afghanistan, bringing total US aid for the impoverished country and Afghan refugees in the region to nearly 782 million USD since October, the White House said on Tuesday.

* Poland's government is planning a new law to limit the impact of rising gas prices on public institutions such as hospitals as part of a package of measures to combat inflation, a deputy prime minister said on Tuesday.

* Gabon's oil workers' union and water and electricity workers' union said they had begun a general strike in protest against COVID-19 restrictions and the cost of PCR tests.

* Britain's finance ministry is considering cutting a green levy on energy bills as a way to help consumers who are already facing high inflation, The Times newspaper reported on Tuesday.

* A magnitude 6.7 earthquake struck about 91 km (56.54 miles) south-east of Nikolski, Alaska, the United States Geological Survey (USGS) said on Tuesday. The earthquake was at a depth of 33 km, the USGS said.