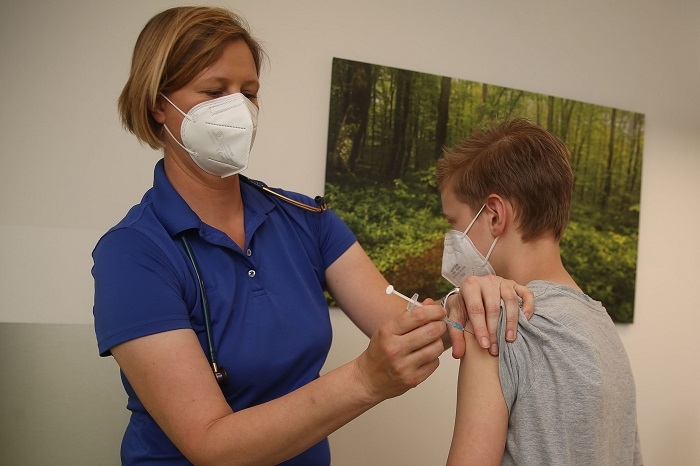 Germany must revamp its COVID-19 vaccination strategy to tackle the Omicron variant and to ensure it can develop a new vaccine rapidly if it faces a more deadly coronavirus variant in the future, Health Minister Karl Lauterbach said.

The United Nations said on Saturday it would invite Sudanese military leaders, political parties and other groups to take part in discussions aimed at ending a crisis unleashed by a coup in October.

* Russia said on Sunday it would not make any concessions under US pressure at talks this week on the Ukraine crisis and its demands for Western security guarantees, and that there was a risk they might end quickly, the RIA news agency reported.

* China on Saturday pledged 63 million USD in grants to Maldives for infrastructure projects, in a bid to deepen cooperation between the two countries.

* The United Kingdom is ready to take unilateral action that would suspend customs checks on goods moving to Northern Ireland, foreign minister Liz Truss said ahead of talks with the European Union.

* The European Union plans to legislate in the coming months to require technology companies to do more to tackle child sexual abuse, beefing up current voluntary arrangements, a top official said in a newspaper interview.

* A number of "strategic facilities" in Kazakhstan are under the guard of a Russia-led military alliance invited to restore order, the presidential office said on Sunday, amid the deadliest outbreak of violence in the country's 30 years of independence.

* Iran on Saturday imposed sanctions on dozens more Americans, many of them from the US military, over the 2020 killing of General Qassem Soleimani in a drone strike.

* China reported 165 confirmed coronavirus cases for Jan. 8, up from 159 a day earlier, its health authority said on Sunday. Of the new infections, 92 were locally transmitted, according to a statement by the National Health Commission, from 95 a day earlier.

* The United States has agreed to impose stricter COVID-19 measures at its military bases in Japan, Japanese Prime Minister Kishida Fumio said on Sunday, amid concerns that outbreaks at bases have fuelled infection in local communities.

* Reducing the self-isolation period for people who test positive for COVID-19 from seven days to five would help British workforces that have been hard hit by absences, education minister Nadhim Zahawi said on Sunday.

* Mexico hit a record in confirmed daily COVID-19 cases on Saturday, according to official data, posting more than 30,000 additional infections as the highly contagious respiratory disease spread in the country.

* An estimated 200 people or more have been killed in villages in Nigeria's Zamfara state during deadly reprisal attacks by armed bandits following military air strikes on their hideouts this week, residents said on Saturday.

* The Saudi-led coalition fighting in Yemen believes the use by Houthi forces of two ports as military bases would turn them into legitimate military targets, coalition spokesman Brigadier General Turki al-Malki said on Saturday.

* An earthquake of magnitude 6.0 struck New Britain Region, Papua New Guinea on Sunday, the European Mediterranean Seismological Centre (EMSC) said. The quake was at a depth of 15 km, EMSC added.

* At least seven people died and nine were seriously injured when a wall of rock collapsed on top of motor boats below a waterfall in southeastern Brazil on Saturday, the fire department said.