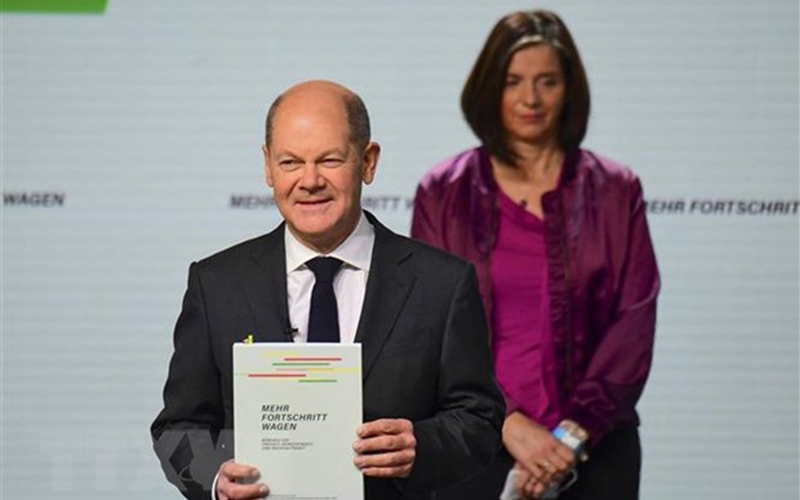 Olaf Scholz has become the Chancellor of Germany (Photo: AFP/VNA)

NDO – “My great wish for 2022 is that we keep standing together,” stated German Chancellor Olaf Scholz in his first New Year's address as head of government. The importance of international cooperation was also emphasised by Olaf Scholz in the context that Germany has officially taken over the G7 Presidency.

German Chancellor Olaf Scholz said that controlling the COVID-19 pandemic is one of the main tasks for 2022. The pandemic continues to develop complicatedly in the early days of 2022 while the Omicron variant makes the situation more difficult in many countries, including Germany.

Chancellor Scholz said that everyone is aware that the pandemic is not yet over and the German government is committed to a quicker and more resolute response. After a tumultuous 2021, Scholz said that, by uniting, Germany can solve all challenges, even in the most difficult times.

When Germany took over the G7 rotating presidency on January 1, international cooperation and solidarity were especially emphasised by German Chancellor Scholz. Berlin's leading role and influence at present are considered very important, especially as the world is still facing the complicated pandemic and a series of urgent challenges. The German chancellor emphasised the goal of creating harmony among countries so that every voice is heard and shared.

Analysts say that Germany has many advantages and opportunities in taking on the role of “the locomotive” of the G7, and the member countries are making efforts towards a common goal, marking the return of traditional partnership between countries. In 2021, the G7 showed efforts to change the view that the G7 is just a closed playground for Western powers.

The highlight in 2021 is the return of the US at multilateral forums, including the G7. Under the leadership of the United Kingdom, the rotating president in 2021, the G7 has initially restored cohesion and consensus in addressing emerging non-traditional security and geopolitical challenges.

German Foreign Minister Annalena Baerbock emphasised the message that you will never have to go alone if you work together. This is also the operating principle during the G7 Presidency in 2022. The priorities on the G7 agenda are expected to be officially announced by the German government in January.

However, according to Minister Baerbock, the fight against climate change, especially the issue of global emissions, will be one of the main focuses that Germany pursues during its term. Germany hopes that the G7 Summit, to be held in Bavaria in late June, will create an important stepping stone on the road to the global climate agenda.

Chancellor Scholz affirmed his determination to promote the role of G7 Presidency to make the G7 become a group of pioneers in environmentally friendly economic models and for a more just world. The G7's goal is not only to accelerate the global shift towards an eco-friendly economy, but also to avoid trade conflicts related to other green tariff policies, such as the “carbon border tax” of the European Union (EU).

In 2022, G7 leaders will also discuss issues including contributions to the world's vaccination programme to help fight the COVID19 pandemic, strengthened cooperation with ASEAN as well as other organisations in various fields, and the settlement of hot issues in the world such as the Iran nuclear deal, Ukraine border tension, migration waves, and others.

Germany has just undergone a transition of power, with an unprecedented tripartite governing coalition at the federal level. Reaffirming the position as the Europe's largest economy and the role of leading the world's leading powers to agreement to solve common challenges and promote global cooperation are the first challenges for German Chancellor Olaf Scholz.