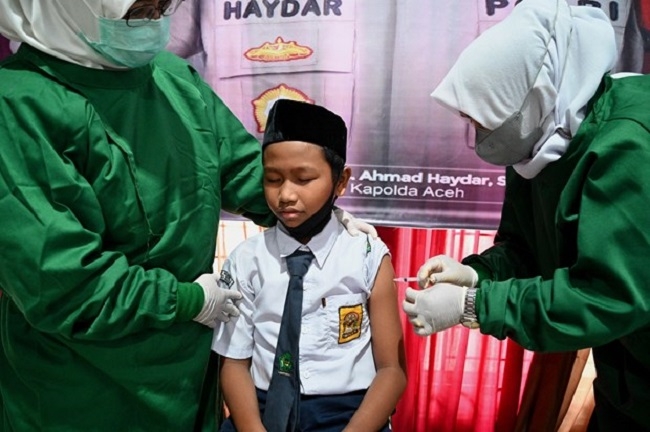 Indonesia started vaccinating elementary school children aged 6-11 against COVID-19 on Tuesday, becoming one of the few countries in Asia to start mass inoculations for young children.

Vaccinations against the virus for this age group has been a sensitive issue in some countries. Europe has just started vaccinations for younger children, but countries there are pursuing different strategies because lack of data has made winning over parents more difficult.

Children and young people are seen as unwitting transmitters of the virus to high-risk people and experts say inoculating them is a critical step towards taming the pandemic.

Indonesia's campaign kicked off with 100 children using China's Sinovac vaccine. They are among 26.5 million targeted for immunisation in Indonesia, which was once Asia's COVID-19 epicentre.

Muhammad Avisena, 11, said the pain of the injection was worth it compared with potential suffering from becoming sick.

"It will hurt more if exposed to COVID-19 because the lungs would be damaged and infected," he said after his injection.

His mother, Siti Nuriyah Safitri, said the vaccination would help children get back to school faster after nearly two years of disruption.

"I feel bad for the children if the learning system stays this way," she said.

She added that at her son's school only 50% of the children attend each day, with those not coming to school doing lessons online.

COVID-19 has infected 4.2 million people and killed more than 143,000 in Indonesia, where about 38% of the 270 million population have been vaccinated.