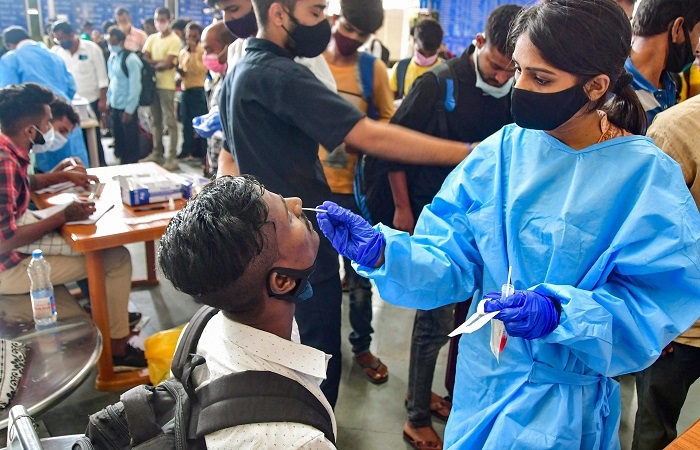 India's health ministry said on Tuesday states should ramp up COVID-19 testing as the world battles the new coronavirus variant Omicron, while some cities delayed the reopening of schools as a precautionary measure.

The head of the World Health Organization (WHO) voiced concern on Tuesday that some countries were introducing blanket measures against the Omicron coronavirus variant that may not be necessary and penalised African nations unfairly.

* President Vladimir Putin said on Tuesday that Russia would be forced to act if its "red lines" on Ukraine were crossed by NATO, saying Moscow would view the deployment of certain offensive missile capabilities on Ukrainian soil as a trigger.

* Russia is not preparing any aggressive plans against Ukraine, the Interfax news agency quoted Nikolay Patrushev, the secretary of Russia's Security Council, as saying on Tuesday.

* Belarus will try to solve the migrants problem by the end of 2021, Russia's RIA news agency quoted Belarusian leader Alexander Lukashenko as saying on Tuesday.

* The World Trade Organization should be able to wrap up negotiations on fishing subsidies and a response to the COVID-19 pandemic early in 2022 even after postponing its ministerial meeting this week, its director-general said on Tuesday.

* The EU drug regulator could approve COVID-19 vaccines that have been adapted to target the new variant within three to four months if needed, the agency's chief said as she said existing shots would continue to provide protection.

* South Africa's Aspen Pharmacare signed a non-binding agreement with subsidiary firms of Johnson & Johnson as part of its negotiations for a licensing deal to package, market and sell the latter's vaccine in Africa.

* Becton Dickinson and Co said it was confident that its COVID-19 tests would be able to detect the new coronavirus variant Omicron.

* Regeneron Pharmaceuticals Inc said its COVID-19 antibody cocktail, and similar drugs, could be less effective against the Omicron variant.

* There was a fall in world share markets and scramble to safer currencies and bonds on Tuesday after the CEO of drugmaker Moderna warned that vaccines are unlikely to be as effective against the Omicron variant.

* Poland will cut VAT on heating as part of a package of measures to lower inflation, the prime minister said on Tuesday, after a flash estimate from the statistics office showed price growth surging to a fresh two-decade high.

* Forty-two cases of the COVID-19 Omicron variant have been confirmed in 10 European Union countries, the head of the EU's public health agency said.

* Ecuador will impose entry curbs on travellers flying from or via a number of African countries and will request vaccine certificates from those arriving from other countries.