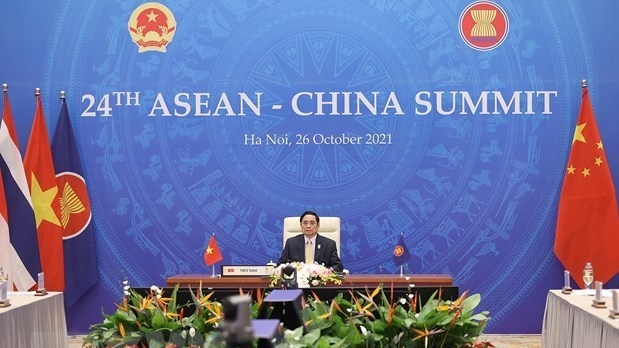 NDO/VNA - Prime Minister Pham Minh Chinh will attend the ASEAN-China Special Summit commemorating the 30th year of the ASEAN-China Dialogue Relations, which will be held virtually on November 22, at the invitation of Chinese President Xi Jinping.

Leaders of the two sides will review the ASEAN-China cooperation in the past three decades and devise orientations for the new period to deepen their relations so as to match the comprehensive strategic partnership, established during the 24th ASEAN-China Summit held in October.

ASEAN and China set up their ties in 1991 and upgraded the relations to a strategic partnership in October 2003.

The ASEAN-China relationship has been realised through many mechanisms including the annual summit, ministerial meetings, and five-year action plans.

China has fully participated in regional mechanisms initiated and led by ASEAN, affirming the organisation’s central role and solidarity in regional cooperation processes and supporting ASEAN to uphold its role at international multilateral forums.

ASEAN and China signed the Declaration on the Conduct of Parties in the East Sea/South China Sea (DOC) in November 2002 and vowed to exert efforts to fully and effectively implement the DOC and accelerate the building of an effective and practical Code of Conduct in the East Sea/South China Sea (COC) that is in accordance with international law, including the 1982 United Nations Convention on the Law of the Sea (UNCLOS).

Two-way trade surged 80-fold in the past 30 years. China was the largest trade partner of ASEAN in 2009-21 and the bloc became China’s leading trade partner for the first time last year.

China was the fourth biggest FDI investor of ASEAN in 2020, with 7.6 billion USD.

China donated 1 million USD for the COVID-19 ASEAN Response Fund and committed to earmarking 5 million USD from the ASEAN-China cooperation fund for public health programmes and projects in collaboration with ASEAN.

As an active member of ASEAN, Vietnam serves as a gateway to the ASEAN-China free trade area. Vietnam-China trade revenue posted an average growth rate of 20 percent annually in the past five years.