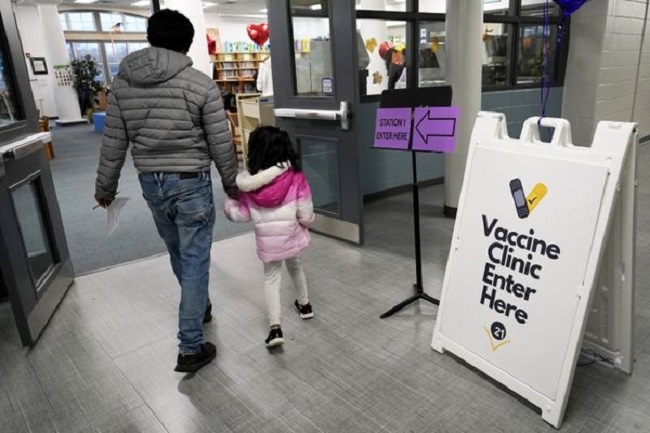 Canada authorized the use of Pfizer COVID-19 vaccine for children aged 5 to 11, paving the way for the inoculation of elementary school-age children across the country.

The leaders of Armenia and Azerbaijan will meet in Brussels in mid-December to discuss tensions that have led to border clashes with several troops, the European Union said on Friday.

* The number of migrants trying to force their way into Poland from Belarus fell again on Friday after an apparent change in tack by Minsk that could help calm a crisis that has mushroomed into a major East-West confrontation.

* British and European Union negotiators highlighted significant gaps on Friday in their positions on trading arrangements for Northern Ireland despite a senior British minister expressing confidence of breaking the impasse.

* The White House on Friday pressed the OPEC producer group again to maintain adequate global supply, days after US discussions with some of the world's biggest economies over potentially releasing oil from strategic reserves to quell high energy prices.

* China reported 23 new confirmed coronavirus cases for Nov. 19 compared with 24 a day earlier, its health authority said on Saturday. There were no new deaths, leaving the death toll unchanged at 4,636.

* Russia, which reported a record daily high of deaths in the last 24 hours, said its level of collective immunity against COVID-19 stood at 50.2% as of Nov. 19, up from 49% the previous week.

* The US Food and Drug Administration has authorized booster doses of COVID-19 vaccines for all adults six months after having been fully vaccinated with the shots from either Pfizer Inc and partner BioNTech SE or Moderna Inc.

* Mexico's health ministry reported 3,837 new cases of coronavirus infection and 216 additional fatalities on Friday, bringing the total number of confirmed cases to 3,858,831 and the death toll from the pandemic to 292,145.

* Italy reported 48 coronavirus-related deaths on Friday against 69 the day before, the health ministry said, while the daily tally of new infections fell to 10,544 from 10,638.

* Dutch healthcare officials said they have begun delaying operations for some cancer and heart patients to free up space in intensive care units during a record wave of COVID-19 infections.

* A third dose of the COVID-19 vaccine should be extended to all French people aged over 40, France's health regulator said.

* The European Union's drug regulator has issued advice on using Merck's COVID-19 pill for adults and began a review of a rival tablet from Pfizer to help member states decide on quick adoption ahead of any formal EU-wide approval.

* Pfizer plans to apply for a European authorisation of its experimental antiviral pill, German weekly Wirtschaftswoche said, citing sources close to the European Medicines Agency and the company.

* Resurgent concerns about COVID-19 in the face of looming European lockdowns weighed on a range of sectors Friday, pushing stocks and oil down and boosting the dollar.

* Oil prices fell below 80 USD a barrel as surging COVID-19 cases in Europe threatened to slow the economic recovery while investors also weighed a potential release of crude reserves by major economies to cool prices.

* The speaker of the eastern-based Libyan parliament, Aguila Saleh, submitted papers on Saturday to stand in presidential elections.

* Mexico has agreed a new flexible credit line over two years with the International Monetary Fund (IMF) worth some 50 billion USD, the Washington-based fund said on Friday.

* Bahrain's foreign minister, Abdullatif Al Zayani, said on Saturday that Lebanon needs to demonstrate that its powerful Iran-allied Hezbollah movement can change its behaviour to mend a rift with Gulf Arab states.

* Ecuador's President Guillermo Lasso has renewed a 30-day state of emergency in nine of the country's 24 provinces, as his government seeks to curb crime it says is connected to drug consumption and trafficking.

* Nigeria's economy grew just over 4% in the third quarter, the statistics office said on Thursday, lifted by higher oil prices, as the country targets mass vaccination from this month.