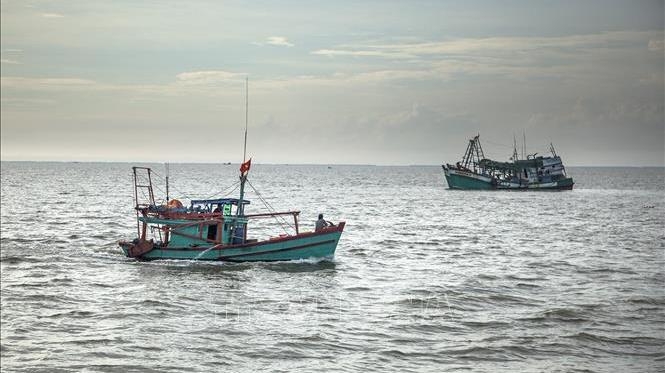 The forums drew representatives from ASEAN member countries and partners, as well as prestigious experts and scholars in the region and the world.

At the AMF, ASEAN member countries highlighted the role of the AMF, especially in enhancing the efficiency of coordination and cooperation among 12 ASEAN specialised agencies on sea cooperation.

They welcomed the ASEAN Leaders' Declaration on the Blue Economy adopted during the 38th and 39th ASEAN Summits in November this year, heading to a common perspective on blue economic collaboration and defining potential cooperation areas among ASEAN member countries and between the groupings and partners.

On the occasion, as the co-chair of the ARF’s inter-sessional meeting on maritime security for the 2018-2021 period, Vietnam reviewed outcomes of cooperation in the field and the progress of the ARF Work Plan on Maritime Security, and shared expectations on maritime security collaboration and prioritised areas in the time to come.

At the EAMF, participants focused on maintaining peace and upholding the law-based regional order to reinforce international law, including the UN Convention on the Law of the Sea (UNCLOS) 1982, promoting the growth of blue sea economy and the protection of sea environment. They highlighted the important role of the UNCLOS 1982 as the legal framework for all activities at seas and oceans, while calling for stronger cooperation in protecting and preserving sea environment.

Participants showed concern about current challenges such as the degradation of sea environment, piracy, terrorism, smuggling, human trafficking and natural disaster, and at the same time underlined the significance of sea transport connections and the ensuring of supply chain in the region and the world.

They stressed the importance of maintaining peace, stability, maritime and aviation security, safety and freedom in the East Sea/South China Sea, which they consider the shared interest of countries, while underlining the need to abide by the UNCLOS 1982, calling for restraint so as to not complicate the situation, and the settlement of disputes on the foundation of international law, including the UNCLOS 1982. They supported the full and effective implementation of the Declaration on the Conduct of Parties in the East Sea (DOC) and the building of a Code of Conduct in the East Sea that complies to international law, including the UNCLOS 1982. They noted that 2022 is an important milestone as the year marks the 40th anniversary of the UNCLOS 1982 and 20th anniversary of the DOC.

Addressing the AMF and EAMD, Vu Ho, Director of the ASEAN Department under the Ministry of Foreign Affairs of Vietnam highly valued the role of the forums in promoting sea cooperation inside the ASEAN and between the association and partners. He underlined the significance of maintaining the central role of the ASEAN in the region as well as in sea cooperation, and called on partners to continue supporting the ASEAN in a transparent and trustful spirit and enhance cooperation with the grouping through ASEAN-led mechanisms.

The Vietnamese representative stressed the urgent need of maintaining and protecting the sea environment, suggesting that it should be considered a regular topic of sea-related discussions in the region in the time to come.

Amid the complicated developments in the East Sea, Vietnam reiterated its principled stance and highlighted the benefit and responsibility of countries in making the East Sea a sea of peace, cooperation and stability.