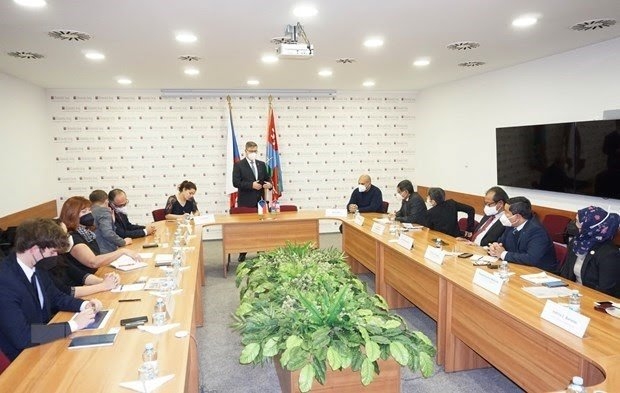 Governor of Ústecký Jan Schiller introduces the region and its potentials for cooperation to the ASEAN Committee delegation (Photo: VNA)

NDO/VNA – A delegation of the ASEAN Committee in the Czech Republic paid a working visit to Ústí nad Labem city on November 12, as part of the Committee’s programme on promoting exchange and cooperation with Czech localities in 2021.

The city, the political and economic centre of the Ústecký Region, is the 7th largest city in the Czech Republic with a population of 92,000.

Receiving the delegation, Governor of Ústecký Jan Schiller lauded ASEAN member countries’ dynamic development as well as the ASEAN Committee’s efforts to strengthen and promote exchanges and collaboration between ASEAN and Czech localities.

He expressed his hope and confidence that ASEAN and the Czech Republic, including the Ústecký Region, will continue to promote and strengthen cooperation in areas of their strengths and mutual interest.

At a working session between the delegation and local experts and representatives of competent agencies, the sides discussed posibilities for cooperation in fields of mutual interest, such as medical personnel training, hydropower, nuclear power, education and training, science and technology, labour and employment cooperation, and other social issues.

Vietnamese Ambassador Thai Xuan Dung praised the potential for economic, trade and investment cooperation between Vietnam and the Czech Republic in general and the city and region in particular.

He suggested the two countries ultilise favourable conditions brought about by the EU-Vietnam Free Trade Agreement (EVFTA) in extending their bilateral engagements toward effectiveness and practical outcomes, particularly in energy, industry, and science and technology.

In an interview with the Vietnam News Agency’s correspondent, Dr. Vladimír Zemanek from the Czech-based technology company CHEMINVEST said there is extensive room for joint works between Vietnam and the Czech Republic in general and Ústecký in particular, specifically in the fields of energy, construction and technology industries focusing on new, innovative and environmentally friendly technologies.

The ASEAN Committee in the European nation groups the embassies of Indonesia, Malaysia, Myanmar, the Philippines, Thailand and Vietnam.