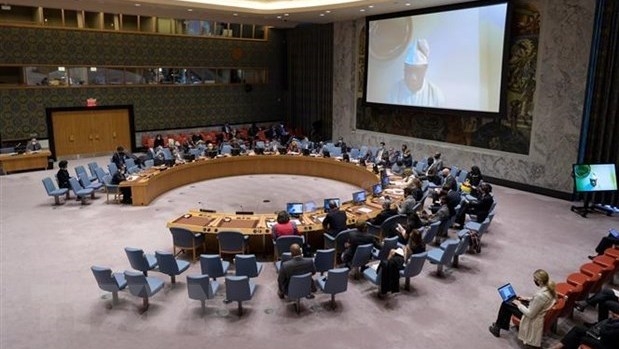 At a UNSC's meeting in New York (Photo: Xinhua)

NDO/VNA – Vietnam has underlined the need for a comprehensive approach for countries in the Sahel region to address the root causes of terrorism.

During the United Nations Security Council’s meeting on November 12 on activities of the Joint Force of the Group of Five for the Sahel (FC-G5S), which comprises Burkina Faso, Chad, Mali, Mauritania and Niger, Minister Counsellor Nguyen Phuong Tra, Deputy Permanent Representative of Vietnam to the United Nations, called on parties concerned to strive and stay united to fight terrorism.

She shared the common concern over security, development and humanitarian challenges in Sahel region, and urged all regional stakeholders, especially those in Mali and Niger, to exercise utmost restraints, and promote national harmony via dialogue and consultation.

The Vietnamese representative highlighted a need to offer suitable support in resources so that the FC-G5S could perform their assigned tasks.

Rapporteurs at the event called for providing sustainable and long-term financial assistance for the FC-G5S. Several opinions expressed support for the establishment of a UN Support Office for the FC-G5S to combat terrorism.

The UNSC’s member states called for serious enforcement of human right and international humanitarian laws, including protecting civilians, especially women and children. They took note of the UN Secretary General’s proposal regarding the launch of a support mechanism for the FC-G5S.