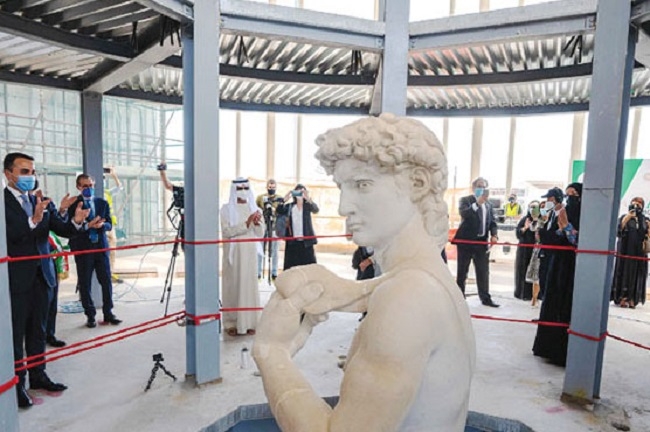 Italy, renowned for its centuries of experience trying to preserve its rich artistic culture, has used its presence at a world fair in Dubai to launch a project to help other nations around the Mediterranean rescue heritage at risk.

Italy has already hit the headlines with its pavilion at Expo 2020, which opened at the start of the month following a year-long delay because of the pandemic.

Central to its national display is a reproduction of Michelangelo's David, made using one of the world's largest 3D printers and based on 40 hours of digital scanning of the original 16th-century marble sculpture that stands in Florence.

Grazia Tucci, an engineering professor at the University of Florence, said the model is an example of the kind of work its centre will promote.

"Like the Bamiyan Buddhas (in Afghanistan) or Palmyra's Arch of Triumph (in Syria), our cultural heritage is at risk. At risk from nature and also from human beings," said Tucci, who will head the centre.

Speaking at the project's launch on Sunday, she said it was essential to preserve heritage for future generations and Italy would share "the best technologies" to train professionals from around the Mediterranean in preserving, digitising and restoring objects and sites that could be lost to violence.

Hybrid courses, involving online and in person sessions, will be launched over the coming weeks and the Advanced Vocational Training Centre for the Digitization and Re-construction of Cultural Heritage will remain at the Italian pavilion after the world fair closes in March. It is not yet clear for how long.

Based on the theme "Beauty connects people," the pavilion is among almost 200 stands at Expo 2020 Dubai representing 192 countries. It is the first world fair to be held in the Middle East and follows Expo 2015 in Milan.

The Expo saw 411,768 ticketed visits in the 10 days since opening on Oct 1, spokesperson Sconaid McGeachin said on Monday. The world fair, which runs until March, hopes to attract 25 million visits.