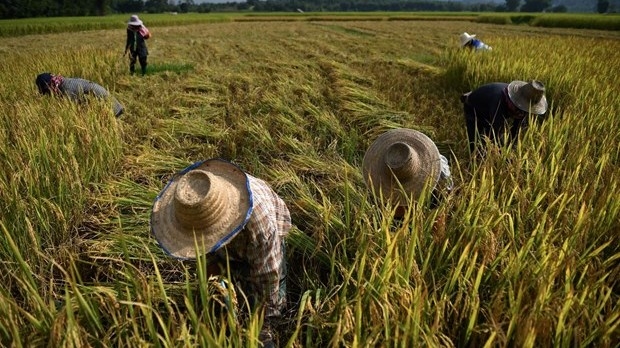 Thailand is on track to meet its target of exporting 6 million tonnes of rice this year. (Illustrative image/Photo: AFP/VNA)

NDO/VNA - Thailand is on track to meet its target of exporting 6 million tonnes of rice this year thanks to factors such as higher output, a weaker baht and an anticipated upstick demand.

The Department of Foreign Trade (DFT) under the Ministry of Commerce said that the country's rice exports have recorded positive numbers since June, with the volume in June and July increasing by 7.35% compared to the same period last year.

In addition, based on export license applications to the DFT, Thailand's rice export volume in August and September was 831,260 tonnes and 631,363 tonnes, respectively.

To promote rice exports, the DFT will hold conferences with other trading partners such as Indonesia, Bangladesh and China. At the same time, it also accelerates the promotion of Thai rice through various online channels.