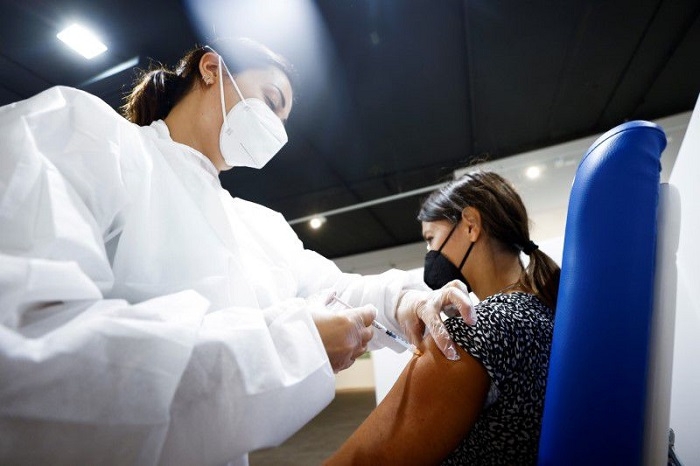 Bookings for COVID-19 vaccinations jumped in Italy on Friday after the government made inoculation mandatory for all workers in some of the strictest anti-coronavirus measures adopted in the world.

India will extend until the end of the year a reduction on taxes on drugs used for the treatment of COVID-19 infection, Finance Minister Nirmala Sitharaman said.

* The United Nations Security Council extended a U.N. political mission in Afghanistan on Friday for six months to allow for Secretary-General Antonio Guterres to work out what changes might be needed after the Taliban seized control of the country.

* Argentine President Alberto Fernandez reshuffled his Cabinet late on Friday, looking to draw a line under a bruising week that saw infighting within the ruling Peronist party threaten to derail the government coalition.

* Venezuelan President Nicolas Maduro Argentina arrived in Mexico City on Friday, Mexico's foreign ministry said, ahead of the summit of the Community of Latin American and Caribbean States (CELAC).

* US President Joe Biden will convene a virtual COVID-19 summit on Wednesday on the margins of the U.N. General Assembly aimed at boosting vaccinations worldwide with the goal of ending the pandemic by the end of 2022.

* Leaders of the EU's bloc of nine southern European members on Friday demanded urgent global action to combat a worsening climate crisis and build a sustainable future for the Mediterranean region.

* Greek Prime Minister Kyriakos Mitsotakis said on Friday Turkey was an important partner in tackling any new migration challenge to Europe and needed support, and that Europe itself has not delivered on a common policy in addressing the migrant issue.

* US Secretary of State Antony Blinken has no plans to meet with his new Iranian counterpart next week at the annual gathering of world leaders at the United Nations in New York, US Ambassador Linda Thomas-Greenfield said on Friday.

* A drone strike in Kabul last month killed as many as 10 civilians, including seven children, the US military said on Friday, apologizing for what it called a "tragic mistake".

* Mexico's Health Ministry on Friday reported 3,754 new confirmed cases of COVID-19 in the country and 192 deaths, bringing the total number of official infections since the pandemic began to 3,552,983 and the death toll to 270,538.

* Advisers to the US Food and Drug Administration voted on Friday to recommend COVID-19 vaccine booster shots for Americans 65 and older and those at high risk of severe illness, after overwhelmingly rejecting a call for broader approval.

* Britain simplified rules on Friday for international travel to England in a boost to the tourism industry, including scrapping the need for fully vaccinated passengers to take expensive COVID-19 tests on arrival from low-risk countries.

* Travellers entering Switzerland who have not been vaccinated against COVID-19 or recovered from the virus will need to provide a negative test result from Monday, the government said.

* Spain will give a third vaccine dose to nursing home residents and other vulnerable groups, while data showed the infection rate fell to its lowest level since June.

* Australia's police arrested 235 people in Melbourne and 32 in Sydney on Saturday at unsanctioned anti-lockdown rallies and several police officers were injured in clashes with protesters.

* Italy reported 66 coronavirus-related deaths on Friday against 67 the day before, the health ministry said, while the daily tally of new infections fell to 4,552 from 5,117.

* Abu Dhabi will cancel COVID-19 testing requirements to enter the emirate for travellers from the UAE starting on Sunday, the United Arab Emirates' state news agency WAM said on Saturday.

* The third chartered flight bringing civilians from Afghanistan to Qatar since US forces withdrew last month landed on Friday with around 170 passengers on board, including US and European citizens as well as Afghans, a Qatari official said.

* Oil prices fell on Friday as energy companies in the US Gulf of Mexico restarted production after back-to-back hurricanes in the region shut output.