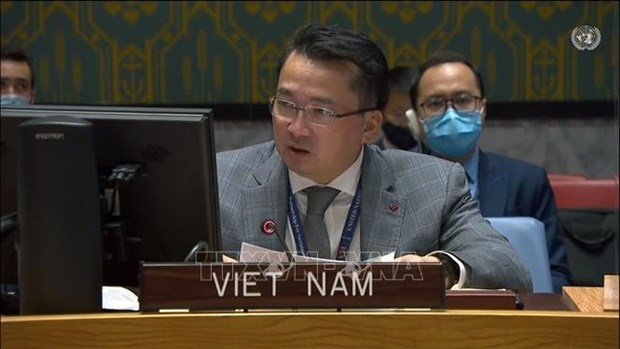 NDO/VNA – Ambassador Pham Hai Anh, Deputy Permanent Representative of Vietnam to the United Nations, has highlighted the importance of advancing the transitional process through the Juba Peace Agreement in Sudan, with efforts focused on resolving differences among the parties.

Addressing the UN Security Council’s briefing on activities of the 1591 Committee and the UN Integrated Transition Assistance Mission in Sudan (UNITAMS) on September 14, Anh stressed that it was critical to foster collaboration among the United Nations, UNITAMS, African Union, Intergovernmental Authority on Development (IGAD) and other international partners.

Underlining the importance of ensuring the full implementation of the National Plan for the Protection of Civilians, he called on the Transitional Government to further strengthen its related responsibility by addressing the causes of intercommunal violence.

He urged Sudan to facilitate the UN-African Union Mission in Darfur (UNAMID)’s liquidation process, emphasising that for Sudan to effectively own the transition process, the international community must continue to support the country in addressing COVID-19. At the same time, urgent efforts must be made to provide food and basic services to those in need.

Turning to the issue of sanctions, he said clear, well-identified benchmarks and frequent reviews are needed to reflect progress on the ground.

Speaking at the event, Volker Perthes, Special Representative of the UN Secretary-General for Sudan and Head of UNITAMS, said that Sudan is making headway in its transition to democracy, with growing momentum towards drafting a new Constitution and organising elections, but long‑term success requires sustained international support.

UNITAMS stands ready to provide technical support, at Sudan’s request, on a road map for military and security sector reform that would align with the Prime Minister’s initiative and the Juba Agreement for Peace in Sudan, he added.

UNSC members also acknowledged the recent positive developments in Sudan, but they said that the country still faces many challenges, especially increasing violence between communities, and economic and humanitarian crisis.

They reaffirmed their support for UNITAMS’s activities in backing the transition process in Sudan.