Lying deep in the forest, there is an ancient rock fortress with century-old history, and is also a famous place for archaeological research, tourism and exploration of the ruins that once was full with life.

Sigiriya is an ancient rock fortress and palace built by King Kashyapa during the reign of 473 – 495 which is standing majestically 660 feet straight up. It is located in the northern Matale district near the town of Dambulla in central province of Sri Lanka. The word Sigiriya or the Sinhagiri means the Lion’s Rock where you have to climb up 1200 steps before you reach the Lion Rock Fortress on top of Sigiriya. There are several platforms that break up the steps and allow for a little break if you need it. Today Sigiriya rock fortress is one of the most famous Archeological Treasure and UNESCO named Sigiriya rock as a World Heritage in 1982 under the name “Ancient City of Sigiriya Sri Lanka”.

The fortress was later swallowed by the forest, and only familiar to local villagers. Outsiders used knowledge of its past, preserved in Buddhist texts, to search for the ancient site. British historians rediscovered its astonishing buildings and frescoes in the 19th century. 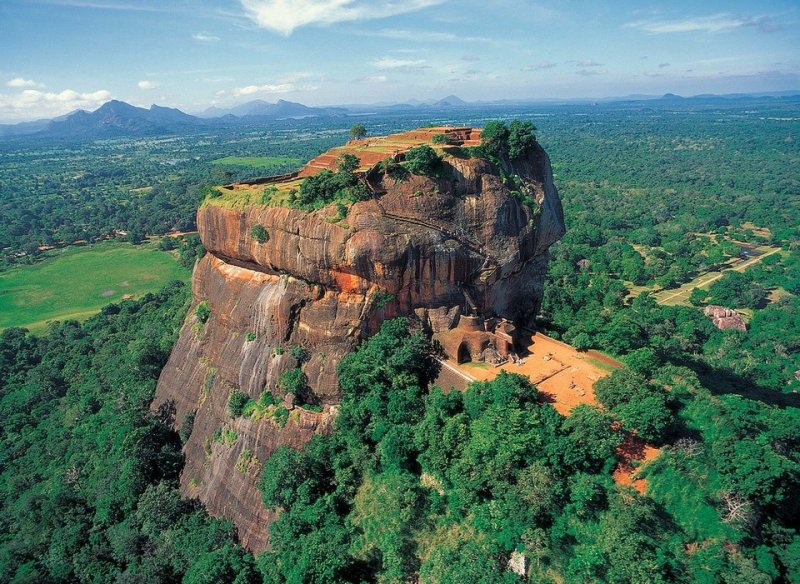 The Architecture of Sigiriya Lion Rock

This fortified garden city of Sigiriya rock fortress is an exceptional master piece of ancient urban planning / landscape & architecture / construction technology /exceptional hydraulic engineering & management / ancient fine art with unique harmony between nature and human imagination and all these living examples proved that it was a Well Planned City & Palace in 5th Century AD. Sigiriya rock fortress is recognized as one of the best preserved surviving ancient urban sites in Asia from the 1st millennium or simply it’s a Living Museum. Sigiriya World Heritage Site is versatile and many-faceted appeal, and it is one of Sri Lanka’s ancient political capitals and Sri Lanka’s most sensational heritage site.

Sigiriya is considered to be one of the most important urban planning sites of the first millennium, and the site plan is considered very elaborate and imaginative. The plan combined concepts of symmetry and asymmetry to intentionally interlock the man-made geometrical and natural forms of the surroundings. On the west side of the rock lies a park for the royals, laid out on a symmetrical plan; the park contains water-retaining structures, including sophisticated surface/subsurface hydraulic systems, some of which are working today. The south contains a man-made reservoir; these were extensively used from the previous capital of the dry zone of Sri Lanka. Five gates were placed at entrances. The more elaborate western gate is thought to have been reserved for the royals. 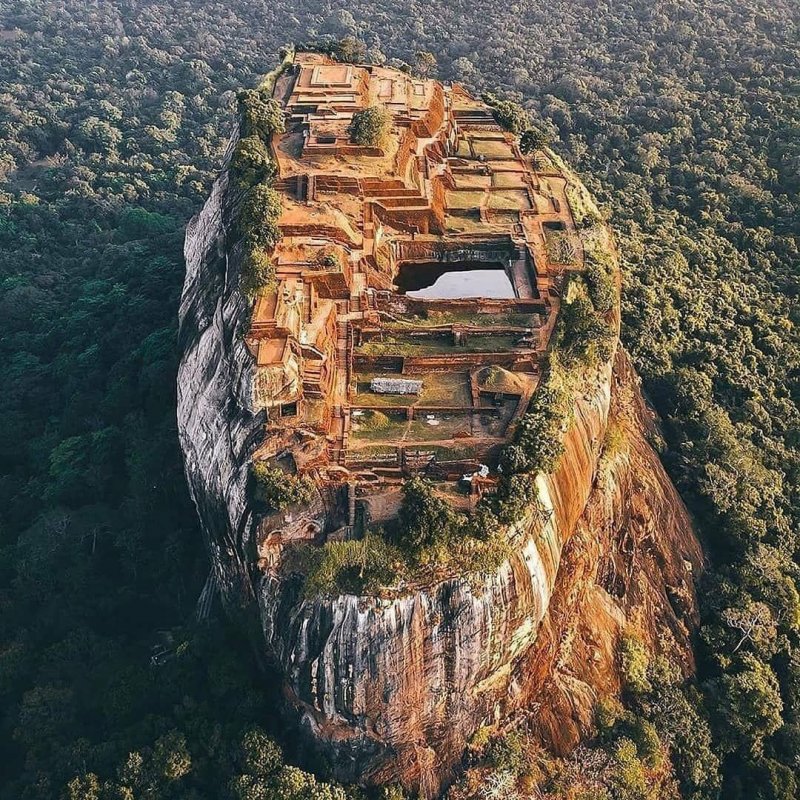 Sigiriya was built by the fifth-century king Kashyapa I, who ruled the native Sinhalese dynasty, the Moriya. The imposing fortress was the capital of the Sinhalese kingdom until Kashyapa was defeated in A.D. 495.

After Kashyapa, dynasties rose and fell, their fortunes shaped by internal power struggles and conflicts between native Sinhalese and outside invaders from India. 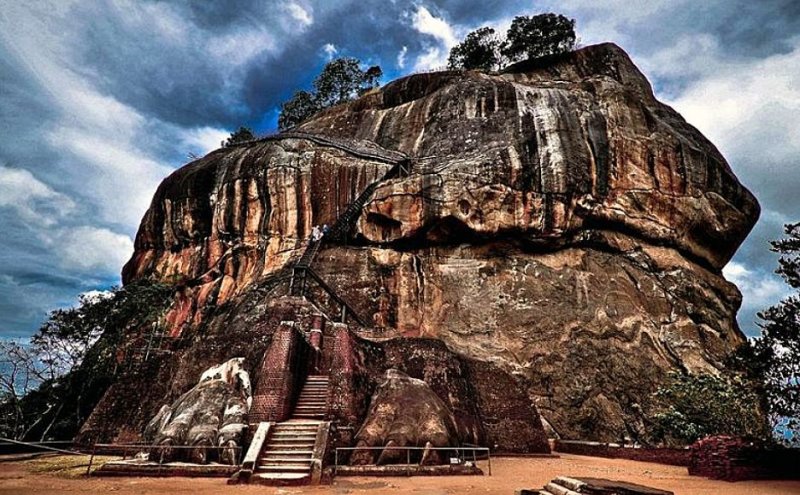 The Mahavamsa, a fifth-century Sri Lankan epic, tells how the Indian prince Vijaya was the grandson of a lion. He traveled to the island of Sri Lanka and married Princess Kuveni. From their union was born the Sinhalese race (sinhala means “of lions”). In the Sinhalese tradition, the lion is the mythical ancestor of kings and a symbol of royal authority. The photograph shows what remains of the monumental Lion Paws Gate at Sigiriya.

Various cities held the status of capital after Sigiriya, such as Polonnaruwa. By the 12th century, however, overall control of Sri Lanka progressively weakened. Sinhalese power retreated to the southwest of the island, abandoning the Rajarata region, and the former administrative centers, including Sigiriya, started to fall into disuse.

Sri Lanka’s position in the Indian Ocean made it vulnerable to Europeans looking to expand their control in the region. By the mid-1500s the Portuguese had thoroughly exploited dynastic tensions in Sri Lanka’s ruling elite and controlled much of the island.

A century later the Dutch had replaced the Portuguese as colonial masters, and they were in turn displaced by the British in the late 1700s. By 1815 the Kingdom of Kandy, the last independent, native state on the island, became part of the British Empire.

British imperial rule brought civil servant George Turnour to the island. An aristocrat, scholar, and passionate historian, Turnour worked with a Buddhist monk to translate an ancient fifth-century chronicle, the Mahavamsa, from the Sri Lankan Pali language into English. Based on this and other texts, he identified two ancient capitals: Anuradhapura and Polonnaruwa.

Turnour also studied a later chronicle of Sri Lankan history, the Culavamsa, which told the story of King Kashyapa. In the late fifth century, this Sinhalese prince killed his father, King Dhatusena, and seized the throne, usurping his brother, who fled to India. Fearing reprisals, he built the fortress Sigiriya—but in vain: His brother returned, defeating Kashyapa, and Sigiriya lost its brief status as capital.

In 1827 a Scottish officer, Jonathan Forbes, became friends with Turnour, and on hearing the story of Kashyapa and his palace, decided to look for it. In 1831 he set off to where locals told him he would find the remains of an ancient city.

His memoir, Eleven Years in Ceylon, describes “the rock of Sirigi [sic],...frowning defiance over the scanty fields and the far-extending forest of the surrounding plain.” As he approached, he could see platforms and galleries carved into the rock. Two of his party managed to scramble some way up but dislodged rocks, “which crashed among the boughs of the trees at a great depth below.”

Unsure as to whether he had found the Sigiriya mentioned in the Buddhist texts, Forbes abandoned the expedition. Revisiting a few years later, he traced the moat that surrounds the gardens at the foot of the rock but did not attempt to climb the cliff face. He doubted that the name Sigiriya was related to lions, as he had seen nothing to support that etymology. 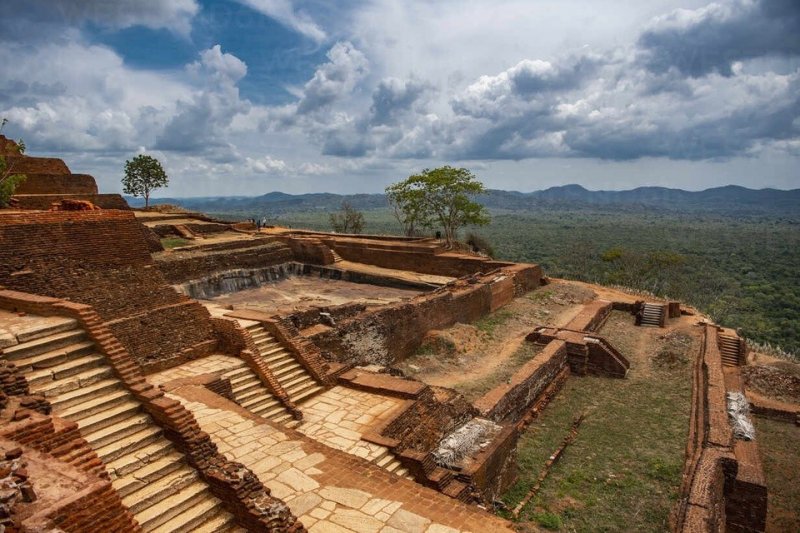 Among the significant features of Sigiriya, the Water Gardens are especially noteworthy. Though outwardly the Water gardens appear to be one garden system in Concept, four distinct parts are clearly discernible in its creation, and at present they are called the Water Garden Nos. 1, 2 and 3 and the Miniature Water Garden.

The Water Garden No. l has symmetrically arranged four larges ’L’- shaped ponds creating an island in the middle. This is considered a special feature found in ancient garden designs and is termed “Char-Bagh’ and this specimen in Water Garden No. 1 seems to be the most ancient one extent in the world today. The Water Garden No. 2 has fountains, and hence is also called the Fountain Garden. Two summer palaces flank either side of this Fountain Garden. Visitors will wonder how the fountains were fed with water. The answer lies in the moats built round the summer palaces, connected tó concealed subterranean channels, which feed . the. fountains ingeniously arid unobtrusively. Water Garden No. 3 is located at a higher elevation and has and asymmetrical lay-out, the balance and symmetry of the other sections of the garden system being absent here. . The Miniature Water Garden is a ‘miniaturized’ refinement of the other three garden systems, a kind of micro scale-model of die total concept. The inter-connection between the different parts of the Water Gardens and the Overall balance,' symmetry and integration. Thereby achieved is indeed a triumph. 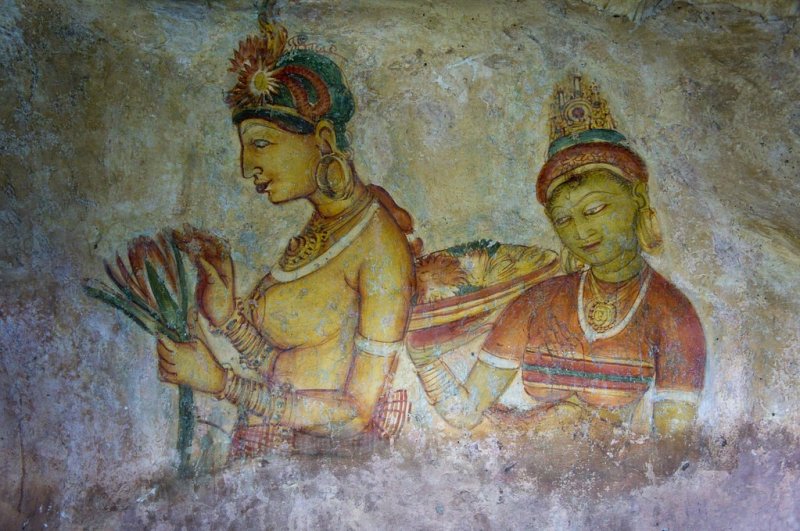 The lion rock Sigiriya Graffiti were written on the surface of the Mirror Wall at Sigiriya. Scribbled on the wall are over 1800 pieces of prose, poetry and commentary written by ancient tourists. These graffiti offer a fascinating insight into the history of Sigiriya and the evolution of language in Sri Lanka over a period of 800 years. The majority of the graffiti refer to the beautiful paintings of semi-nude females. These graffiti confirm that this site was the residence of King Kashyapa who ruled from 477 to 495 AD. The texts also suggest that the females depicted in the frescoes are the ladies of the King's royal court - the ladies of the harem.

The graffiti range from statements of awe, declarations of love, commentary, curses, laments, diary entries, or mere statements of visit. 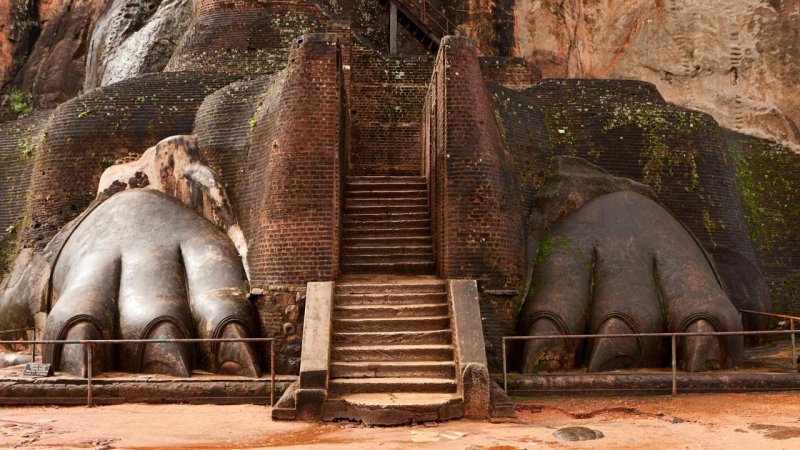 The final ascent to the royal palace atop Sigiriya rock lies through the Lion Staircase, which faces north and has two huge paws of a lion in front. These lion-paws, made of brick and covered with plaster, are the remnants of a fore part of lion figure that must have once stood there.

The Palace Complex on the top of the Sigiriya rock is around 1.5 hectares in extent. The principal monument to be seen there is the royal palace which lies towards the west. The palace garden consisting’ of a large artificial pool and other garden features are located to the east. Below the palace, on a rock facing the east is a throne carved out of the natural rock. 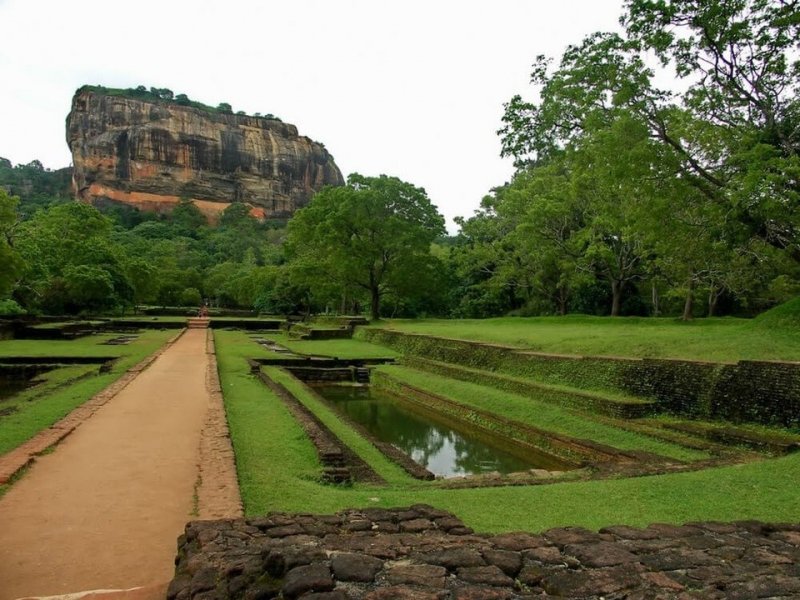 The Boulder Garden comprises sloping terrain around the central rock which is dotted with boulders of various sizes. The routes to the palace on the rock summit are laid out through the boulder garden as winding pathways that are punctuated by natural boulder arches. Among the unique features of this garden are the Cistern Rock deriving its name from a large cistern formed out of the natural boulder and large granite slabs, the ‘Audience Hall’ where a five-meter long main throne is carved out of the living rock, the ’Preaching Rock’ where a seat is carved out at the flattened edge of a fairly high boulder, and the ‘ Asana Cave’ where a seat is carved out inside a natural cave. Rock caves with drip-ledges and shrines used during the periods when Sigiriya was a Buddhist monastery are also to be seen in this area. The Terraced Garden of Sigiriya Lion Rock lies in the high ground between the Boulder Garden and the Sigiriya rock and it is fashioned into a series of roughly concentric terraces by means of stone retaining walls.