Baiae, Roman's ancient city ruins, was once called "The Las Vegas of Roman" for its glorious and luxurious life of the elite here.

Baiae was an ancient Roman town situated on the northwest shore of the Gulf of Naples and now in the comune of Bacoli. It was a fashionable resort for centuries in antiquity, particularly towards the end of the Roman Republic, when it was reckoned as superior to Capri, Pompeii, and Herculaneum by wealthy Romans, who built villas here from 100 BC to AD 500. It was notorious for its hedonistic offerings and the attendant rumours of corruption and scandal.

The lower part of the town later became submerged in the sea due to local volcanic, bradyseismic activity which raised or lowered the land, and recent underwater archaeology has revealed many of the fine buildings now protected in the submerged archaeological park. The site had occasionally revealed Roman sculptures. The Aphrodite of Baiae, a variant of the Venus de Medici, was supposedly excavated there sometime before 1803, when the English antiquary Thomas Hope began displaying it in his gallery on Duchess Street in London.

The important archaeological remains were intensively excavated from 1941, revealing layers of buildings, villas and thermal complexes belonging to periods from the late Republican age, the Augustan, Hadrianic to the late empire.

The lowering of the ground below sea level, due to bradyseism, seems to have occurred in two phases: between the third and fifth centuries, still in the late Imperial era, followed by a more substantial submersion a century later. The lower part of Baiae was largely submerged by the sea by the 8th century. 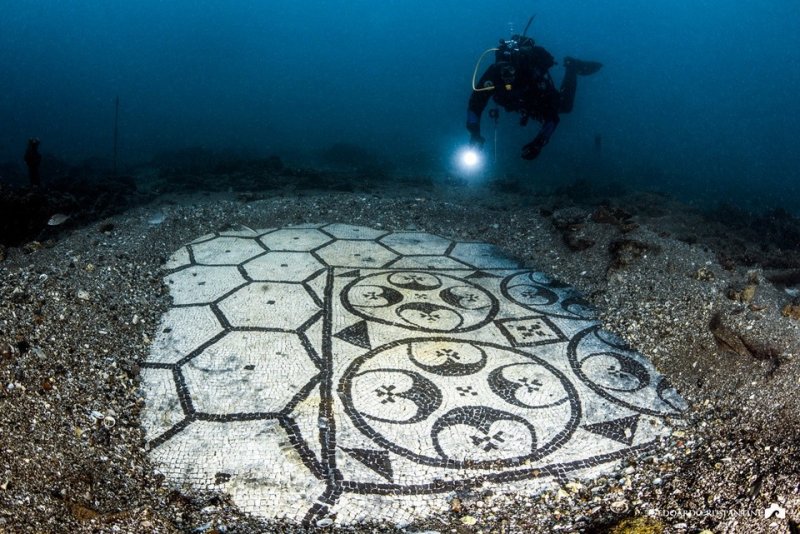 A cache of plaster casts of Hellenistic sculptures was discovered in the cellar of the Baths of Sosandra at Baiae; they are now displayed at the town's archaeological museum. The collection includes parts of several famous sculptures, including Athens's Harmodius and Aristogeiton and the Athena of Velletri. It suggests that the area had a workshop mass-producing marble or bronze copies of Greek art for the Italian market.

Baiae – The sinful city sunken at the bottom of the sea 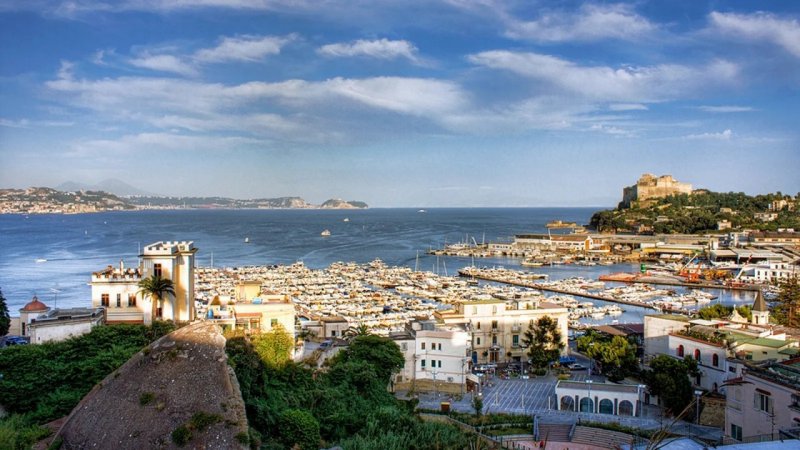 More than 2,000 years ago, Baia was the Las Vegas of the Roman Empire – a resort town approximately 30km from Naples on Italy’s caldera-peppered west coast that catered to the whims of poets, generals and everyone in between. The great orator Cicero composed speeches from his retreat by the bay, while the poet Virgil and the naturalist Pliny maintained residences within easy reach of the rejuvenating public baths.

It was also the place where the rich and powerful came to carry out their illicit affairs.

“There are many tales of intrigue associated with Baia,” said John Smout, a researcher who has partnered with local archaeologists to study the site. Rumour has it that Cleopatra escaped in her boat from Baia after Julius Caesar was murdered in 44BC, while Julia Agrippina plotted her husband Claudius’ death at Baia so her son Nero could become emperor of Rome.

Mineral waters and a mild climate first attracted Rome’s nobility to Baia in the latter half of the 2nd Century BC, and the town was known to them as the Phlegraean (or ‘flaming’) Fields, so named because of the calderas that pockmark the region. 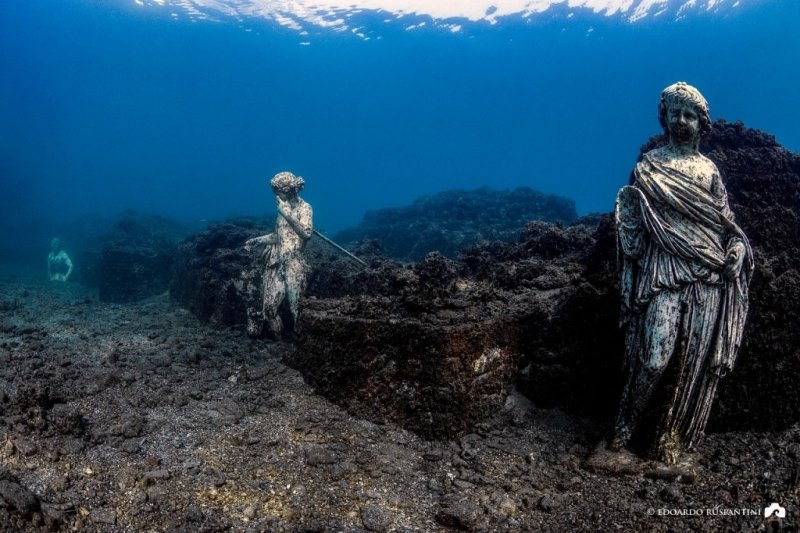 The calderas were revered by the ancient Greeks and Romans as entrances to the underworld, but they also fuelled a number of technological advancements: the local invention of waterproof cement, a mixture of lime and volcanic rock, spurred construction of airy domes and marbled facades, as well as private fish ponds and lavish bath houses.

But given Baia’s sinful reputation, it is perhaps fitting that the abundance of volcanic activity in the area was also its downfall. Over several centuries, bradyseism, the gradual rise and fall of the Earth’s surface caused by hydrothermal and seismic activity, caused much of the city to sink into a watery grave, where it still sits today. 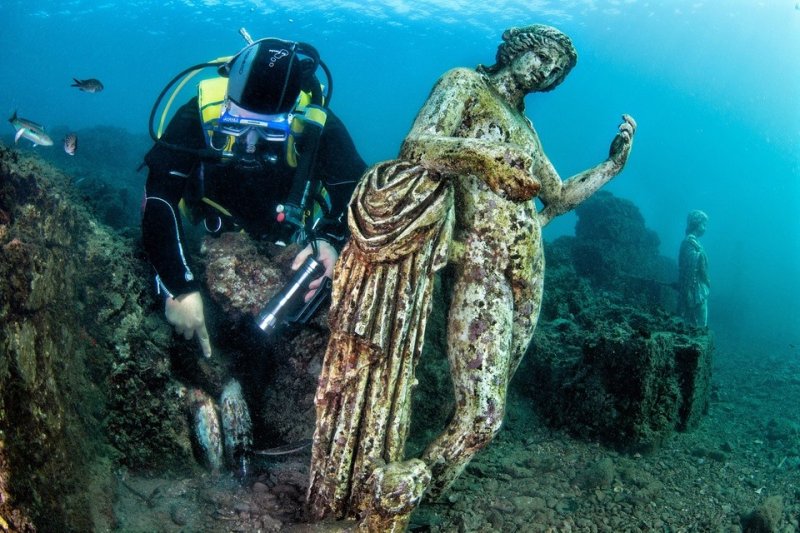 Tourist interest in the once-popular coastline was only renewed in the 1940s when a pilot shared an aerial photo of an edifice just below the ocean’s surface. Soon, geologists puzzled over boreholes left by molluscs on ruins found near the shore, tell-tale signs that parts of the hillside had once dipped below sea level. Two decades later, Italian officials commissioned a submarine to survey the underwater parts of the city.

What they found was fascinating: since Roman times, underground pressure has caused the land surrounding Baia to continuously rise and fall, pushing the ancient ruins upwards towards the sea’s surface before slowly swallowing them again – a kind of geological purgatory.

Because of the undulation of the Earth’s crust, these ruins actually lie in relatively shallow water, at an average depth of 6m, allowing visitors to see some of its eerie underwater structures from a glass-bottomed boat, or videobarca. Local diving centres such as the Centro Sub Campi Flegreo (who partnered with the BBC on a recent documentary about Baia) also offer snorkelling and scuba tours of the submerged city a few kilometres out in the Tyrrhenian Sea. On a calm day, visitors can spot Roman columns, ancient roads and elaborately paved plazas. Statues of Octavia Claudia (Emperor Claudius’ sister) and Ulysses mark the entrance to underwater grottos, their outstretched arms flecked with barnacles. 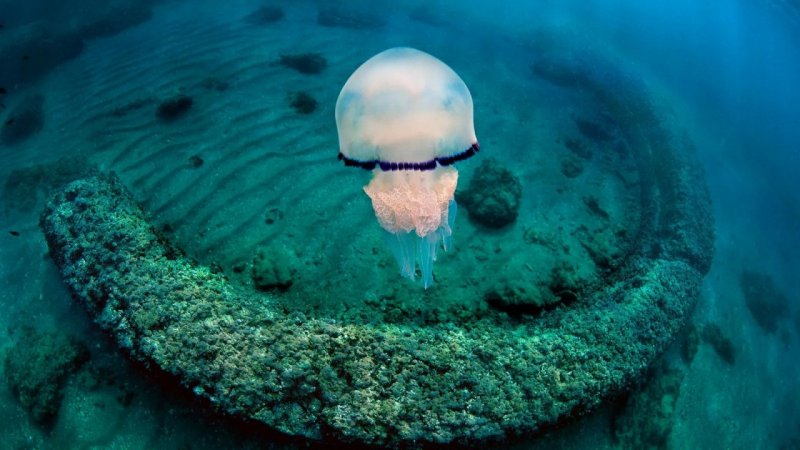 On a calm day, visitors can spot remnants of the Roman town below the Tyrrhenian Sea (Credit: Photononstop/Alamy)

There’s plenty to see above the water line, as well. In fact, many of the submerged sculptures are actually replicas; the originals can be found up the hill at the Baia Castle, where the Archaeological Superintendency for Campania manages a museum of relics pulled from the sea. Many above-ground Roman ruins are also visible nearby at the Parco Archeologico delle Terme di Baia, the portion of the ancient city still above sea level.Excavated in the 1950s by Amedeo Maiuri, the archaeologist who also unearthed Pompeii and Among the most significant and remarkable remains are several dome-like structures such as the great so-called Temple of Mercury, the Temple of Venus, and the Temple of Diana, which were traditionally credited to some of the more famous residents of the town's villas, (although they were not temples but parts of thermal baths).

Although most of the ruins of the old town are incredibly interesting and beautiful, some stand out as exceptionally remarkable. 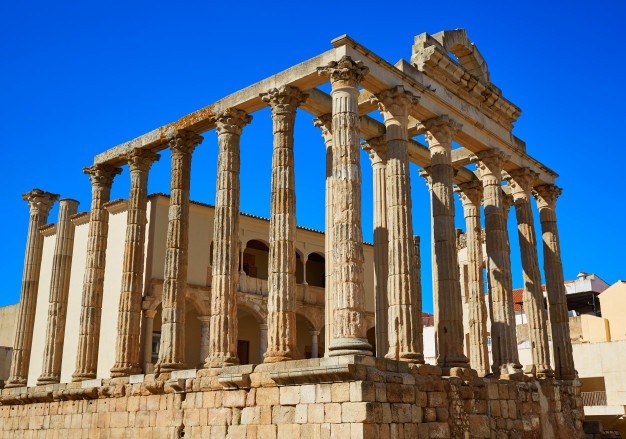 There were many baths in Baiae, both public and private. Warm mineral water was carried to the baths from hot springs through a complex underground system. The underground system also acted as a heating system for the houses, a common arrangement in well-established towns of the Roman and Byzantine Empires, and also supplied the town’s saunas.

The purpose of the saunas was medicinal as well as recreational. The Romans very much believed in the healing power of water, and the baths and saunas were used for treating various illnesses. The aqueduct Aqua Augusta carried the town’s drinking water, and parts of the old aqueduct can still be seen today.

Surrounding the Parco Archeologico delle Terme di Baia, modern Baia is a shadow of its former magnificence, though it still captures the spirit of idleness and pleasure. These days the coastline that was once peppered with mansions and bathhouses features a small marina, a hotel and a handful of seafood restaurants lining a narrow road running north-east toward Naples.

Time may be running out to see this lost relic of ancient Italy’s opulence: seismologists predict further volcanic activity along Baia’s coast in the near future, rendering the city’s fate uncertain once again. Twenty small earthquakes were recorded in the area this past year alone, and talk in recent years has touched on permanently closing the sunken ruins to visitors.

For now, however, visitors can search this underwater city for a hidden entrance - if not to the underworld, then at least to some spectacular subterranean treasures.