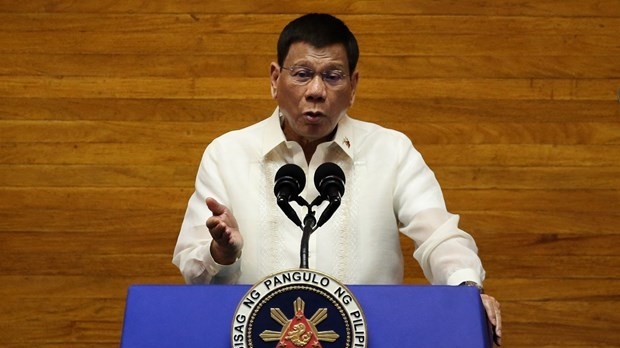 Philippine President Rodrigo Duterte has agreed to be the ruling party’s candidate for Vice President in next year’s elections. (Photo: AFP/ VNA)

NDO/VNA - Philippine President Rodrigo Duterte has agreed to be the ruling party’s candidate for Vice President in next year’s elections, according to the PDP-Laban party.

The announcement came ahead of a national assembly on September 8 where the PDP-Laban party is also expected to endorse Duterte’s aide and senator Christopher “Bong” Go to be its presidential candidate in the 2022 polls.

Initially, President Duterte said he wanted to retire at the end of his term. However, the Associated Press reported in June that President Duterte was considering a call from the ruling PDP-Laban party to run for Vice President to maintain his leadership programme.

Last month, in his end-of-term national address, President Duterte emphasised the war on drugs he launched more than five years ago and urged people to get vaccinated to prevent the spread of the COVID-19 pandemic.

According to the 1987 Constitution of the Philippines, the presidential term lasts six years. Two former Philippine Presidents, Joseph Estrada and Gloria Macapagal Arroyo, successfully ran for lower posts after the end of their presidential terms. However, they have never run for Vice President.