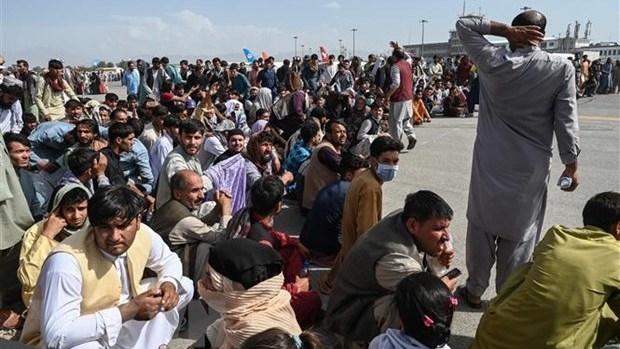 Evacuees wait to leave Afghanistan at the international airport in Kabul on August 16, 2021. (Photo: AFP/VNA)

Addressing an urgent meeting of the UN Security Council on August 16 after the Taliban captured Kabul capital, the Vietnamese diplomat expressed his concern about the situation in Afghanistan, which not only has a negative impact on security and stability in this nation but also the region, especially neighbouring countries.

He affirmed that only a comprehensive political solution can bring lasting peace and stability in Afghanistan, and called on all parties concerned in the country to abide by international humanitarian and human rights law and conduct dialogues to stabilise the situation and promote national reconciliation.

Quy also called for international attention to promoting humanitarian relief efforts to prevent a humanitarian disaster in Afghanistan, while highly valuing efforts of the UN and the UN Assistance Mission in Afghanistan (UNAMA) in the country.

Ambassador Quy also called on the international community, the UN, regional partners and countries to intensify contribution to protecting civilians and stabilising the situation in Afghanistan.

In his speech, UN Secretary General Antonio Guterres expressed his deep concern about the current unstable and chaotic situation in Afghanistan, especially violence, civilian casualties and humanitarian crisis there.

He called on the Taliban to ensure full humanitarian access and security and safety for all people, UN staff and diplomatic corps.

The UNSC and the international community need to show solidarity and raise a common voice on the situation in Afghanistan, he said.

Participant emphasised that any political solution to the current situation in Afghanistan should ensure human rights, especially women's rights.

At the meeting, the UNSC adopted a press statement calling for an immediate end to the use of force in Afghanistan, ensuring security and restoring order, and calling for the establishment of a unified government through dialogue.

The members of the Security Council reaffirmed the importance of combating terrorism in Afghanistan to ensure the territory of Afghanistan should not be used to threaten or attack any country.