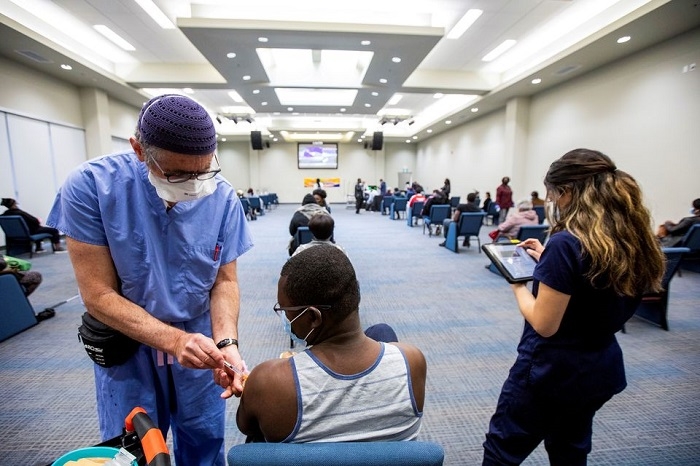 Canada has one of the best inoculation rates in the world, with more than 82% of eligible people having one shot and 71% fully-vaccinated. (Photo: Reuters)

Canada on Friday said it will soon require all federal public servants and many other workers to be vaccinated against COVID-19, as it looks to boost its already world-leading inoculation rate amid a Delta variant-driven surge in new infections.

The vaccine mandate, which will also include air, train and cruise ship travelers, comes just two days ahead of an expected election call by Liberal Prime Minister Justin Trudeau and could prove to be a wedge issue in the campaign, with Conservatives quick to suggest it was an overstep.

Minister of Intergovernmental Affairs Dominic LeBlanc said that the vaccine requirement for public servants will be in place by the end of October and that he expects state-owned corporations and other federally regulated employers to follow suit.

"We expect the federal public service to want to comply with this mandatory requirement," LeBlanc said in a news conference. "This is the best way to end the pandemic and allow the economy to safely remain open."

He added that testing and other measures will be put in place for those who cannot be vaccinated for medical reasons.

Transport Minister Omar Alghabra said that employees in the federally regulated air, rail, and marine transportation sectors will also be required to be vaccinated, along with certain travelers.
"This includes all commercial air travelers, passengers on interprovincial trains, and passengers on large marine vessels with overnight accommodations, such as cruise ships," Alghabra said in the same news conference.

A majority of Canadians support a proof-of-vaccination system, according to a July EKOS Research poll, though it is less popular with Conservative voters who are also less likely to be vaccinated than people who support the ruling Liberals.

A spokesman for Trudeau's chief rival, Conservative leader Erin O'Toole, called vaccines the "most important tool in the fight against COVID-19," but suggested the vaccine mandate was a step too far.

"Conservatives support Canadians’ right to determine their own health choices," said spokesman Mathew Clancy in an email. "Canadians expect reasonable measures, such as rapid testing for those who are not vaccinated."

That would be more in line with the United States, where the White House is requiring all US federal workers be vaccinated or face regular testing and mask mandates.

A number of other countries have mandated vaccines for healthcare and care-home workers, and some require proof of vaccination to access public spaces like bars and restaurants. Canada is planning a vaccine passport for international travel.

Canada has one of the best inoculation rates in the world, with more than 82% of eligible people having one shot and 71% fully-vaccinated. Still, active cases have doubled in two weeks amid a Delta-driven fourth wave.