Flames swept through a residential town outside Athens overnight as wildfires burned across Greece for a fifth day on Saturday, and hundreds of people were evacuated by ferry from the island of Evia east of the capital.

The fire on Mount Parnitha on the outskirts of Athens has forced the evacuation of thousands of people since late Thursday, with emergency crews facing winds and high temperatures as they battle to contain its spread.

As reported by CNN, wildfires have erupted in many parts of the country amid Greece's worst heatwave in more than 30 years, tearing through tens of thousands of acres of forestland, destroying homes and businesses and killing animals. Temperatures have been over 40 Celsius (104 Fahrenheit) all week. 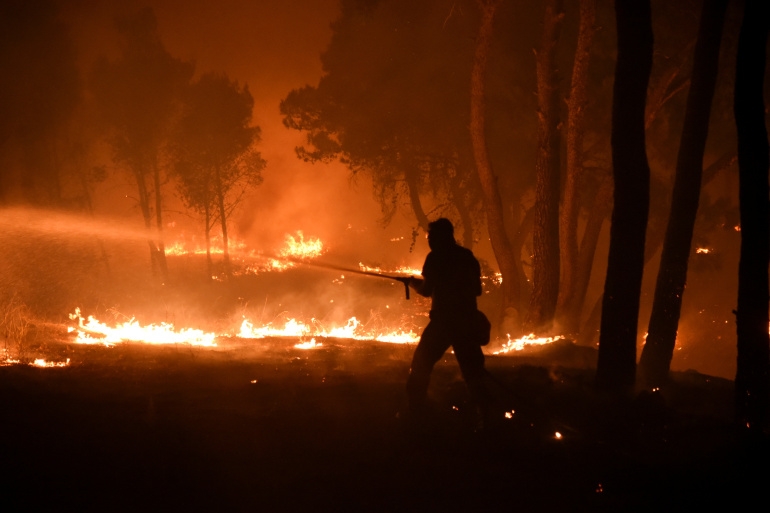 Temperatures have been over 40C (104F) all week. Photo: Reuters.

Prime Minister Kyriakos Mitsotakis, speaking after visiting the main fire control centre in Athens on Saturday, called it a "nightmarish summer," adding the government's priority "has been, first and foremost, to protect human lives."

The government planned to reimburse people affected by the fires and would designate the burned land as areas for reforestation, he said.

More than 700 firefighters, including reinforcements from Cyprus, France and Israel, have been deployed to fight the blaze north of Athens, assisted by the army and water-bombing aircraft.

Overnight on Saturday, strong winds pushed the fire into the town of Thrakomakedones, where it burned homes. Residents had been ordered to evacuate and there were no immediate reports of casualties.

"(It's) really bad," said Thanasis Kaloudis, a resident of the town. "All of Greece has burned."

Fires on Evia, Greece's second biggest island, are scattered from one end on the Gulf of Euboea across to the other, facing the Aegean Sea.

Hundreds of people, including many elderly residents, were evacuated by ferry late on Friday from the town of Limni on Evia as flames reached the shore and the sky turned an apocalyptic red.

Authorities have battled more than 400 wildfires across the country in the last 24 hours, with the biggest fronts still burning in the north of Athens, Evia and areas in the Peloponnese including Mani, Messinia and ancient Olympia, the site of the first Olympic Games. A man watches from the water as a wildfire approaches Kochyli beach near Limni village on Evia island. Photo: CNN

One man died on Friday after being injured by electricity pylon in a fire-stricken area near Athens, and at least nine others have been injured, authorities said.

Residents in suburbs north of Athens have been forced to leave in a hurry with the few belongings they can take.

"Our business, our home, all of our property is there. I hope they don't burn," Yorgos Papaioannou, 26, said on Friday, sitting in a parking lot with his girlfriend as ash fell around them from the smoke-filled sky.

He had left the town of Polydendri when police ordered him and his girlfriend to leave. read more

Fires described as the worst in decades have also swept through stretches of neighbouring Turkey’s southern coast for the past 10 days, killing eight people, Al Jazeera said.

The top Turkish forestry official said 217 fires had been brought under control since July 28 in over half of the country’s provinces, but firefighters still worked on Saturday to tame six fires in two Turkish provinces.

Flames sweeping through its southwestern coastal regions forced the evacuation of tens of thousands of people.

In Turkey’s seaside province of Mugla, a popular region for tourists, some fires appeared to be under control on Saturday and cooling efforts were ongoing. The forestry minister said blazes continued in the Milas area. Environmental groups urged authorities to protect the forests of Sandras Mountain from nearby fires. 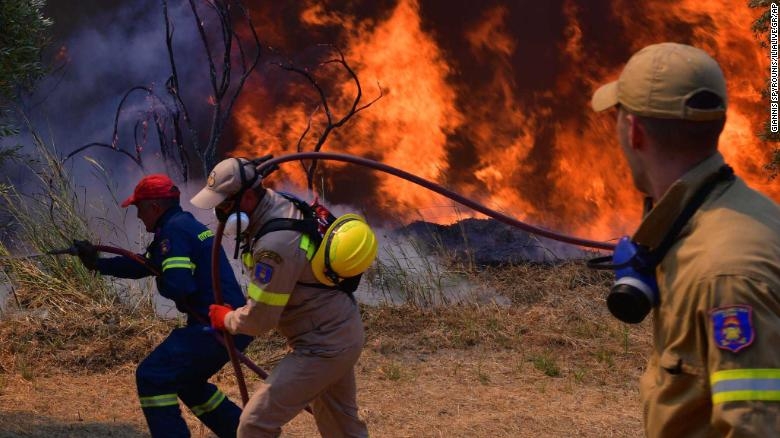 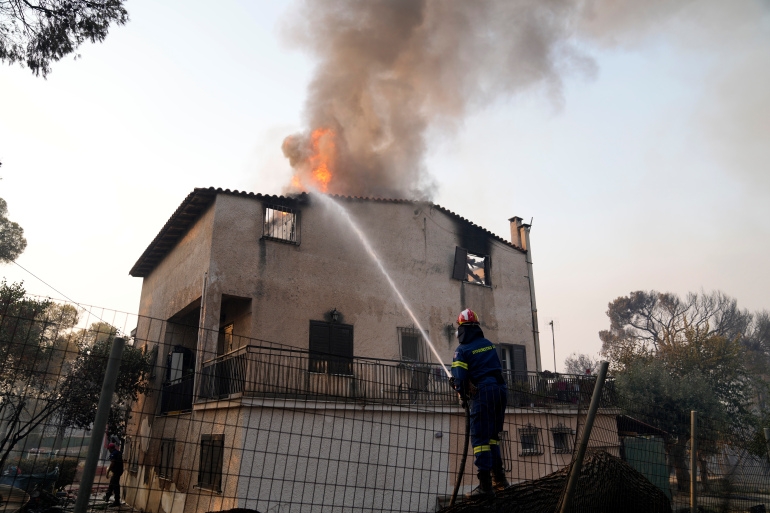 A firefighter tries to extinguish the flames at a burning house in Varibobi area, northern Athens, Greece. Photo: AP

Municipal officials in Antalya, on Turkey’s Mediterranean coast, said a wildfire was still burning around the Eynif plain, where wild horses live.

In Italy, hot winds fanned flames on the island of Sicily this week. Two people died from smoke inhalation in the town of San Lorenzo in the Calabria region on Friday.

According to the Carabinieri, the Italian military police, a woman and her male nephew were trying to extinguish the flames in their olive grove.

A total of 57 fires hit Calabria yesterday. Eleven of those were dangerously close to small towns, with San Lorenzo among them.