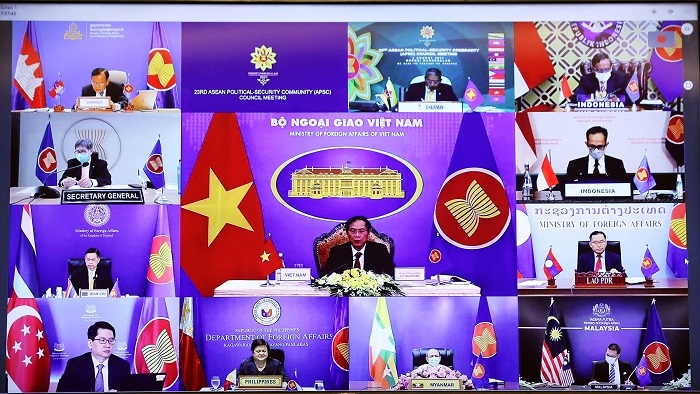 The meeting reviewed the operation of specialised agencies in the political-security pillar and the implementation of the ASEAN Political-Security Community Blueprint 2025.

According to the ASEAN Secretary General's report, despite a range of challenges, political and security cooperation in ASEAN has reaped significant achievements, notably the implementation of recommendations of the Mid-term Review of the APSC.

He highlighted ASEAN collaboration in COVID-19 combat and recovery efforts, national defence, border management and response to non-traditional challenges, as well as cooperation between ASEAN and its partners.

Given the complex developments in the region such as East Sea/South China Sea and Myanmar issues, the meeting stressed the need for the grouping to strengthen its solidarity, trust, understanding and central role, and maintain dialogues and cooperation with its partners, for regional peace, security and stability.

In his remarks, Son said an environment of peace, security and stability is the prerequisite to cope with the pandemic, spur recovery and maintain regional growth.

Pointing to increasing strategic competitions between powers, he suggested ASEAN has a comprehensive approach in relations with its present partners as well as new potential ones.

He also proposed cautiously reviewing operational procedures of ASEAN-led mechanisms to maintain their goals, values and role, while promoting the engagement and dialogue of partners.

The minister also suggested adding emerging issues to the APSC Blueprint 2025, saying more attention should be given to agendas on women, peace and security.

Earlier, ASEAN Foreign Ministers witnessed an online award ceremony of the ASEAN Prize 2020, which was handed over to the Singapore-based ASEAN Studies Centre of ISEAS – Yusof Ishak Institute.