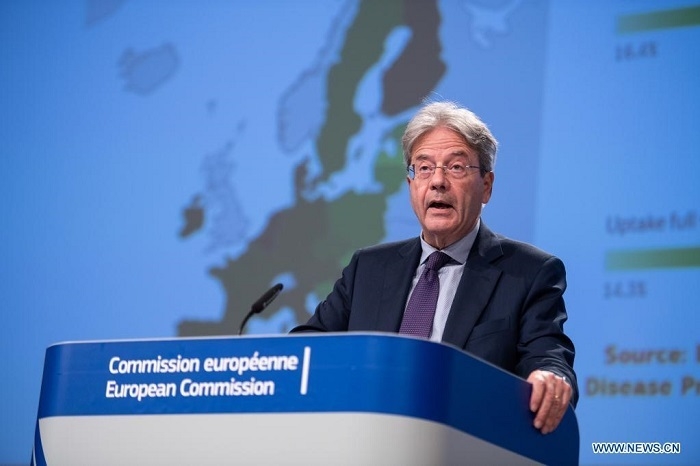 Paolo Gentiloni, European Commissioner for Economy, speaks during a press conference in Brussels, Belgium, on July 7, 2021. (European Union/Handout via Xinhua)

The European economy is recovering better than previously expected, thanks to the roll-out of vaccination campaigns and effective containment measures, said European Commissioner for Economy Paolo Gentiloni on Wednesday.

The economic growth in the European Union (EU) and in the eurozone would expand by 4.8 percent this year, and by 4.5 percent in 2022, according to the Summer 2021 Economic Forecast, presented by Gentiloni at a press conference.

The projections have been revised upwards compared to the Spring Forecast in May, which had predicted the EU's economy to grow by 4.2 percent in 2021 and 4.4 percent in 2022.

Real GDP is to return to pre-pandemic levels by the end of the year for both the 27-member EU and the 19-member eurozone, said Gentiloni.

The inflation in the EU is expected to reach an average of 2.2 percent this year, and 1.6 percent next year, higher than previously estimated.

The rise in inflation is driven by a surge in energy prices and bottlenecks in production. However, this should stabilize as things return to normal and "supply and demand converge," said Gentiloni.

The combination of a marginal contraction of the economy in the first quarter, and good control of the pandemic through containment measures and vaccination campaigns in Europe, allowed for the gradual reopening of different sectors, especially services, which were shut down for a long time due to the pandemic.

The revival of travel and tourism within the Schengen area, made possible by the EU Digital COVID Certificate, as well as investments made in the framework of the national Resilience and Recovery Plans, should also contribute to the economic rebound.

While the spread of new variants of the coronavirus will remain a major risk factor for the economy, the roll-out of the vaccination campaigns will be a decisive element to continue on the path to recovery.

"Crucially, we must redouble our vaccination efforts, building on the impressive progress made in recent months: the spread of the Delta variant is a stark reminder that we have not yet emerged from the shadow of the pandemic," said Gentiloni.