Switzerland will face Spain in Euro 2020 Quarter-finals match on July 2 at St. Petersburg. Here is our list of the preview, predictions, team news, betting tips and odds of the match.

Both Switzerland and Spain had to go through hell before entering the EURO 2020 quarterfinals. The two nations outlasted the respective rivals following a drama, showing incredible mental power and a winning mentality. Switzerland was on the verge of a vicious exit from the tournament but managed to come back and knock out the world champions, France. On the other side, the same was with Spain, who broke Croatia’s resistance during the extra times. Gazprom Arena in Saint Petersburg is the venue of this football classic. 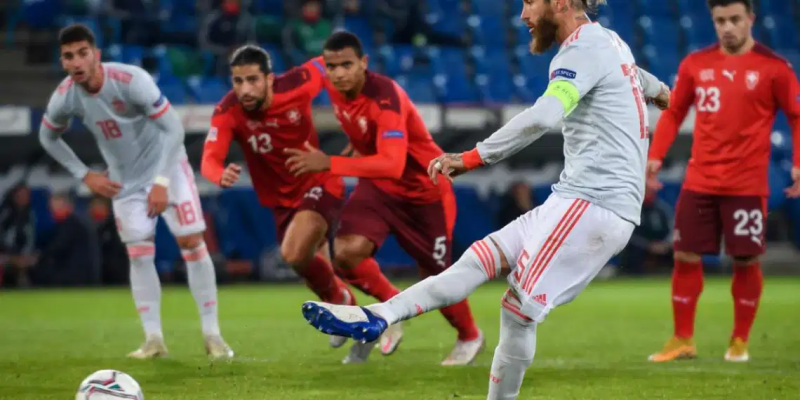 Switzerland vs Spain match is scheduled at 6pm, July 2, and will be held at St Petersburg.

Switzerland (TBA) kicked out France in the previous round, following a penalty shootout, 3-3, 5-4. Vladimir Petkovic‘s crew was up one goal and had a penalty, pretty much holding all the cards in their hands. But in just 15 minutes, everything collapsed, with Hugo Lloris saving the penalty and igniting his teammates to knockout the Swiss team in three minutes. With some 15 minutes before the end, Switzerland was down 3-1, looking exhausted and beaten.

Yet Haris Seferovic and Mario Gavranovic brought a massive comeback, which forced extra time, scoring in 81st and 90th minutes, respectively. Their hits on the target have boosted the morale of the Swiss side, who had luck in the final seconds of the regulation once Koman hit the crossbar.

When talking about statistics, only one of Switzerland’s previous seven games saw under 2.5 goals: their EURO 2020 opener against Wales, 1-1. Five ended with both teams scoring during that span.

Spain (TBA) scored 10 goals in the last two matches, erasing a very poor impression they left in the opening 180 of this EURO 2020. Though, we need to add that in certain moments they had more luck than knowledge against Croatia and Slovakia. But then again, 10 goals need to be respected, regardless of any other circumstance.

Instead of finishing the Croats, Spain allowed the rival to come back in the final moments of the event with two goals. But the Red Fury stepped up in the extra times, confidently solving the riddle and proceeding among the top eight teams on the continent.

Spain didn’t lose in the past 12 games, posting seven draws and five wins. What is a positive trend for Luis Enrique‘s boys is that they kept their net intact in four of the previous six events.

A preliminary Switzerland panel for Euro 2020 was announced on May 19.

Luis Enrique announced a 24-player Spain Euro 2020 squad on Monday May 24. The big name exclusion from the panel is Sergio Ramos, while Aymeric Laporte has been included following his switch from France.

So far, there hasn’t been any information about injured nor suspended players on both sides, but if anything happens, we will make updates.

Like the previous four head-to-head meetings, this one will also end with fewer than three goals. After wild and crazy matchups in the round of 16, be sure that these two sides are going to come out with an ultra-conservative style of play, trying to avoid another thrilling affair.

Our decision to stick with the recent tradition here has brought us quite solid odds -170. In our opinion, this is quite a good bargain. To sum up, under 2.5 goals.

Switzerland to test Spain in Madrid

Following a largely uninspiring 0-0 friendly draw with Portugal on Wednesday, Spain get back to serious business this weekend with a Nations League A Group 4 clash with Switzerland in the unfamiliar surroundings of the Estadio Alfredo Di Stefano in Madrid.

While Spain and Switzerland will kick off the game at opposite ends of the standings, Saturday’s contest isn’t expected to be a one-sided procession between the teams placed first and last.

Luis Enrique’s La Roja are on an impressive run of seven straight wins at home, conceding just once along the way, though the quality of the opposition they faced during that stretch, including the likes of Faroe Islands, Malta and Romania, should be taken into consideration.

Vladimir Petković’s battle-hardened Switzerland team have the quality to give Spain a sterner test. The robust Swiss outfit showcased their ability in a 1-1 draw with group favourites Germany last month, and having scored at least once in 17 of their last 20 competitive matches, the Rossocrociati will expect to make an impact on the scoresheet in the Spanish capital this weekend.

The Red Fury has an extremely good record against Switzerland, losing just once in 22 previous meetings. Spain recorded 16 victories and five draws.

These two teams played in the UEFA Nations League’s most recent edition. Spain was better at home, 1-0, while the rematch in Switzerland concluded without winners, 1-1.

Under 2.5 goals is priced at 9/10 (1.90) and has paid out in Switzerland's last three competitive home fixtures as well as in five of Spain's last six matches.