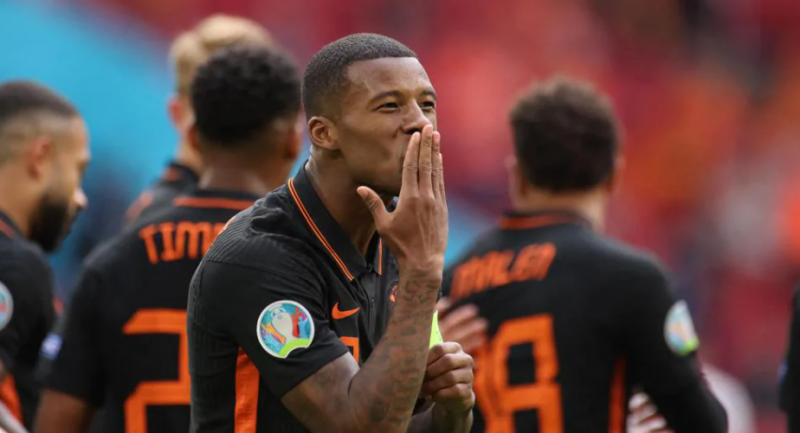 A Memphis Depay strike and two Georginio Wijnaldum finishes made the difference in Amsterdam.

Already heading home, North Macedonia were determined to put on a show for what was Pandev's 122nd (and probably last) international game, Aleksandar Trajkovski smacking a firm shot from the edge of the box against the post on 22 minutes.

However, if they were occasionally fragile in defence, the Dutch sparkled going forward. A constant menace, Donyell Malen sent Depay flying forward on the break in the 24th minute before receiving a return ball and teeing up the on-rushing No10 to complete one of the moves of the tournament with his 28th international goal.

The Netherlands turned on the style again early in the second half, Depay's smart ball in from the left giving Wijnaldum the simple task of scoring his 24th Netherlands goal from close range. His 25th was even easier, the captain tidying away a loose ball after Stole Dimitrievski could only parry Depay's shot into his path.

The Oranje could have scored more; Wout Weghorst hit the bar seconds after coming on for Depay, but their round of 16 opponents will be well aware that Frank de Boer's side have plenty more goals in them, according to UEFA.

Christoph Baumgartner’s goal earned Austria second place in Group C and a first EURO knockout tilt but Ukraine's hopes hinge on being among the best third-placed teams, as reported by UEFA.

With Austria needing to win to qualify ahead of Ukraine, Xaver Schlager’s motoring run kicked off a lively last-day tussle for second place. Committing numbers forward, the Austrians' intent was clear as a Marcel Sabitzer volley sailed over, before Aleksandar Dragović’s header fell wide.

Soon enough, Christoph Baumgartner broke the deadlock on 21 minutes, beating his marker to latch onto David Alaba’s searching corner and prod in with an outstretched leg – at 21, the Hoffenheim midfielder is the youngest goalscorer at the tournament so far.

Ukraine were quick to respond. They slipped through Das Nationalteam’s deep block when Ruslan Malinovskyi picked out Mykola Shaparenko, but goalkeeper Daniel Bachmann was on call to parry.

As the half-time whistle loomed, Marko Arnautović was presented with a golden opportunity to double the lead, only the Austrian striker jabbed wide from Alessandro Schöpf’s measured pass.

In a generally subdued second half, Roman Yaremchuk rifled across goal late on as Ukraine made one final push for the required point; however, Austria had done enough to prevail in Bucharest and secure their passage to the round of 16. 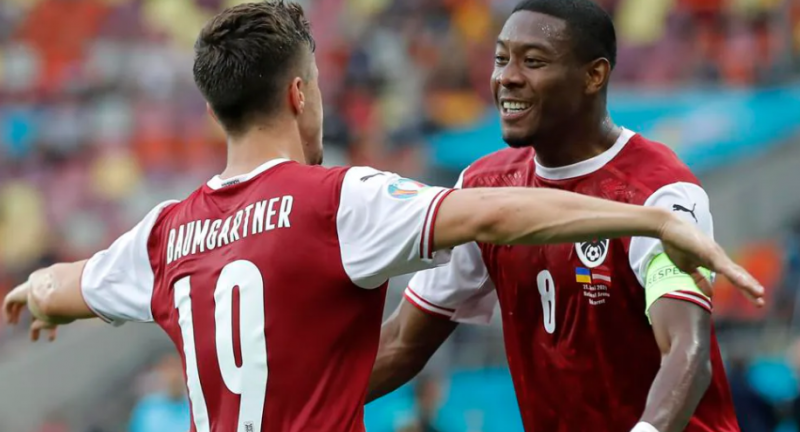 Denmark claimed second place in Group B with a devastating display of attacking football in Copenhagen.

Russia made a positive start and were nearly rewarded as Aleksandr Golovin dribbled through the centre of the Denmark defence from halfway, Kasper Schmeichel having to get down smartly to keep out his low drive. The Danes were not without a threat of their own, Pierre-Emile Højbjerg sending a shot whistling just past the post, before the same midfielder picked out Mikkel Damsgaard on the edge of the area in the 38th minute. One touch to his right and the Sampdoria man unleashed a fine curling effort that Matvei Safonov could only watch fly into his net.

Denmark needed more than one goal, and continued to push forward into the second half. They received a helping hand from Roman Zobnin, whose loose pass was tapped in by Yussuf Poulsen for the second goal. However, Danish hopes were back in the balance as Aleksandr Sobolev went down under Jannik Vestergaard's challenge and Artem Dzyuba smashed in the penalty.

Undeterred, Denmark began to throw everything forward with increasing desperation that was rewarded when Russia could only clear as far as Christensen, whose first-time effort from 30 metres fairly flew into the net. With the Danish fans still celebrating, Mæhle danced into the penalty box and fired in a fourth goal and, after a nervous wait before Belgium's 2-0 win against Finland was confirmed, the Danes' party could start in earnest. 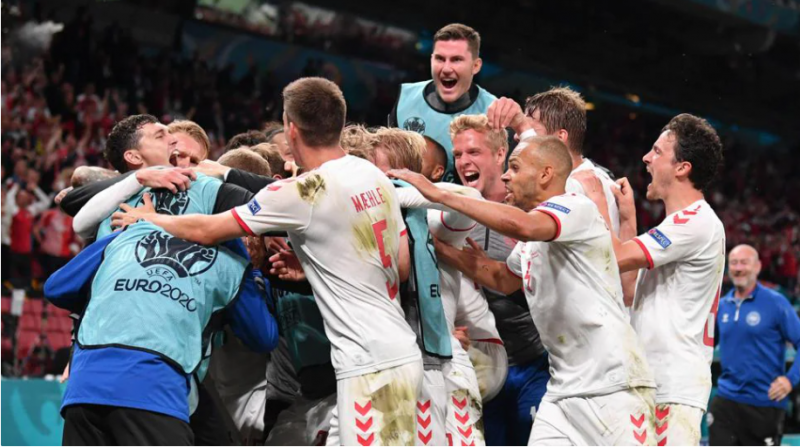 Mindful of how much a point could be worth to them in a tight group, Finland ceded possession to the Red Devils, defending in force and with diligence. Belgium have overwhelmed other sides at this EURO, but Markku Kanerva's team gave them only fleeting glimpses of goal, their best first-half chance falling to Jeremy Doku, who drew a superb save from Lukas Hradecky towards the end of the opening period.

The goalkeeper produced another spectacular block to deny Hazard just after the hour, by which time Glen Kamara had managed to get a first shot on goal for the Finns. Belgium thought they had made the breakthrough soon afterwards, but a Lukaku effort was ruled offside.

However, fate had a cruel blow in store for Hradecky, who spilled the ball into his own net after Thomas Vermaelen's shot ricocheted back at him off the goalpost. Hope of a comeback soon faded, Lukaku thumping in his third goal of the tournament after a neat turn inside the penalty area, as reported by UEFA.

The top two in each group plus four best third-placed teams go through.