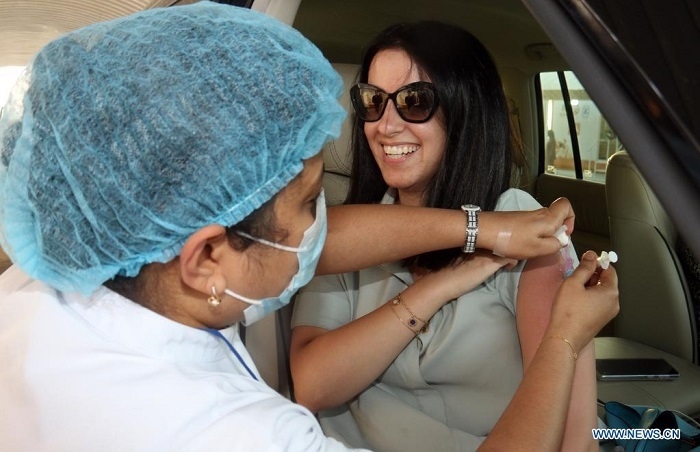 A woman receives a dose of COVID-19 vaccine inside her car at a drive-through vaccination center in Kuwait City, Kuwait, June 10, 2021. (Photo: Xinhua)

The World Bank's Board of Executive Directors has approved funding of US$400 million to support the Indonesian government's reforms to deepen, increase efficiency and strengthen the financial sector resilience.

* British Prime Minister Boris Johnson told the other leaders of the world's most advanced economies on Friday that their G7 summit was a chance to learn lessons from the coronavirus pandemic and ensure they do not repeat the errors made during it.

* A COVID-19 vaccine from Sinopharm unit Beijing Institute of Biological Products has been granted approval for use on people aged between three and 17 in China, a disease control official said.

* The Malaysian government has decided to extend the current restrictive measures in place by another two weeks till June 28 in a bid to slow the spread of COVID-19, Defense Minister Ismail Sabri Yaakob said on Friday.

* The Japanese government is considering ending a state of emergency in Tokyo and several other prefectures as scheduled, but keeping some curbs such as on restaurant hours until the Olympics start in July, media reported.

* The US Centers for Disease Control and Prevention said it will no longer require travellers to wear masks in outdoor transit hubs and in outdoor spaces.

* Johnson & Johnson said the US Food and Drug Administration has extended the shelf life of its single-shot vaccine from three months to four-and-a-half months.

* British Prime Minister Boris Johnson and Canadian Prime Minister Justin Trudeau agreed on Friday to redouble their efforts to secure a trade agreement as soon as possible to unlock such a deal's "huge opportunities".

* Switzerland plans to ease entry restrictions this month and further open up public life as COVID-19 cases continue to decline, the government said on Friday.

* Ocugen said it would no longer pursue an emergency use authorization for its vaccine candidate, Covaxin, and would instead aim to file for a full US approval of the shot.

* The United States will continue to press for a waiver of intellectual property rights for vaccines and treatments even as it and other Group of Seven rich nations sharply expand donations of vaccines to poorer countries.

* OPEC+ oil producers will need to boost their output in order to meet demand set to recover to pre-pandemic levels by the end of 2022, the International Energy Agency said on Friday.

* Britain's recovery from the pandemic sped up in April as lockdown measures eased, with the fastest monthly growth since July leaving output a record 27.6% higher than a year earlier, when the virus was rampant and lockdown tightest.

* German output is rebounding from its pandemic-induced slump and inflation could rise faster than currently expected, potentially affecting behaviour in the economy, the German central bank said.

* Tanzania has asked the International Monetary Fund for a US$571 million loan to help it tackle the challenges caused by the pandemic.

* About 90% of African countries will miss a September target to vaccinate at least 10% of their populations, a WHO official said.