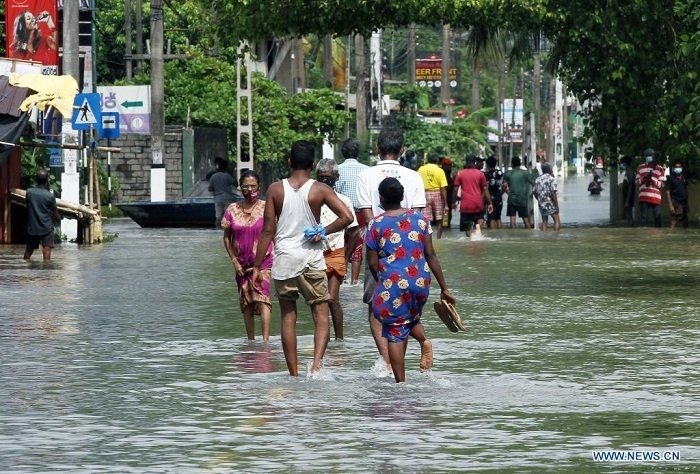 People wade through a flooded road in Gampaha, about 20 km from Colombo, Sri Lanka, on June 4, 2021. Sri Lanka's Meteorological Department on Thursday said that heavy rains and strong winds were expected in several areas of the island country in the coming days due to the onset of the southwest monsoons. (Photo: Xinhua)

Inoculations against COVID-19 have reached 2 billion as the world races to contain the pandemic, but at the current pace, it will take nine more months to vaccinate 75 percent of the global population needed to provide herd immunity, Bloomberg said in a recent report.

* APEC trade ministers joined the Asia-Pacific business leaders on Friday to hear from the private sector their views toward the forum's focus on regional economic integration, trade implications resulting from the economic response to COVID-19 and how economies can be made more resilient to future shocks.

* China and Russia pledged on Friday to firmly support each other on issues concerning the core interests of the two countries. Chinese State Councilor and Foreign Minister Wang Yi and Russian Foreign Minister Sergey Lavrov made the pledge in a phone conversation, saying the two countries remain unswervingly committed to upholding international fairness and justice and safeguarding world peace and stability.

* Indian government Friday announced it has extended visa validity of foreign nationals who came to the country prior to March last year and got stranded due to the COVID-19 lockdown, until Aug. 31.

* At the meeting on the sidelines of the 24th St. Petersburg International Economic Forum on Friday, Russian President Vladimir Putin stressed the need to join efforts globally in the fight against the coronavirus pandemic.

* Health ministers from the Group of Seven (G7) countries have committed to a new agreement making it easier and quicker to share results from vaccine and therapeutic trials to tackle COVID-19 and prevent future health threats, according to a statement released Friday.

* Japan is slated to encourage domestic companies to cooperate with foreign manufacturers of semiconductors amid a global computer chip shortage, the Japanese government said on Friday. Industry Minister Hiroshi Kajiyama described semiconductor and other digital industries as an "indispensable foundation for the people's lives."

* Mexico is gearing up for the largest mid-term elections in its history on Sunday, with tens of thousands of candidates vying to fill more than 20,000 public posts, according to electoral authorities. According to the National Electoral Institute, 93,676,029 Mexicans will be eligible to vote at 162,896 polling stations across the country.

* Citizens of all EU member countries, as well as Israel can enter Montenegro without any conditions related to COVID-19, the government decided on Friday at a meeting. It also relaxed prevention measures ahead of the tourist season.

* Italy's economy is poised to start a period of "sustained growth," according to new modeling released on Friday by the country's National Institute of Statistics (ISTAT). The institute predicted that the country's economy would grow 4.7 percent this year and 4.4 percent in 2022.

* Russian President Vladimir Putin on Friday announced the completion of the first leg of the Nord Stream 2 pipeline between Russia and Germany, which is expected to supply gas within 10 days. The president noted that the route via the Baltic Sea is shorter than onshore, making gas supplies more affordable, predictable and environmentally friendly.

* US President Joe Biden on Friday rejected a new Republican infrastructure counteroffer, but will continue talks with Republicans next week.

* Iran's Supreme Leader Ayatollah Ali Khamenei on Friday urged the Iranians to participate in the upcoming presidential election and make the right choices for solving the country's problems. Khamenei made the remarks in a televised speech on the death anniversary of Ayatollah Ruhollah Khomeini, the late founder of the Islamic republic.

* Over 744 million doses of COVID-19 vaccines had been administered across China as of Friday, the National Health Commission said Saturday.

* Brazil registered 1,454 more deaths from COVID-19 in the last 24 hours, bringing the nationwide tally to 470,842, the health ministry said on Friday. A total of 37,936 new infections were detected, raising the caseload to 16,841,408, the ministry said. Brazil has the world's second highest COVID-19 death toll, after the United States, and the third largest caseload, behind the United States and India.

* As Thailand continued to battle its worst wave of COVID-19 outbreak since the pandemic began, authorities said the popular resort island Phuket remained on track to reopen to vaccinated foreign visitors from July 1.

* Britain has recorded a further 6,238 coronavirus cases, the highest daily figure for more than two months, according to official figures released Friday. The total number of coronavirus cases in the country now stands at 4,506,018.

* Republic of Korea reported 744 more cases of COVID-19 as of midnight Friday compared to 24 hours ago, raising the total number of infections to 143,596. The daily caseload was up from 695 the prior day, marking the highest in 22 days since May 14. The daily average caseload for the past week was 595.

* Canada's unemployment rate edged up 0.1 percent to 8.2 percent in May, Statistics Canada said Friday. The country's jobless rate rose for a second month under third-wave restrictions with about 68,000 out of job in May due to governments' strengthened lockdown measures to stem the spread of COVID-19 third wave.

* The Consultative Committee in Belgium has agreed on new travel rules and relaxation plans on Friday to allow people to travel safely for their summer holidays. As of July 1, holidaymakers will be able to use an EU Digital COVID Certificate to travel around the EU bloc.

* Germany's seven-day incidence of COVID-19 infections fell below the benchmark of 30 for the first time since mid-October last year, the Robert Koch Institute (RKI) announced on Friday. Daily infections also declined as 3,165 cases were registered on Friday, according to RKI, the federal government agency for disease control and prevention. At the peak of the third wave, more than 30,000 daily infections were reported in Germany.

* Pakistan reported 1,923 new COVID-19 cases on Friday with a positivity rate of 3.82 percent, the National Command and Operation Center (NCOC) said on Saturday. According to the NCOC, the country's number of overall cases rose to 930,511, which include 860,385 recoveries since February of last year when it detected the first case.