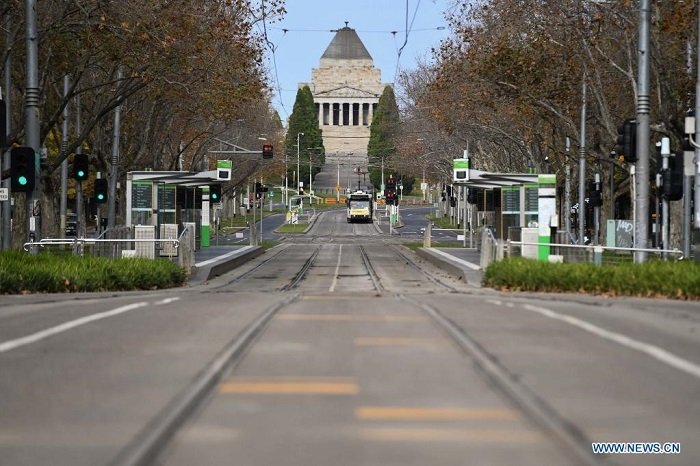 Photo taken on May 28, 2021 shows an empty street in Melbourne, Australia. (Photo: Xinhua)

Health authorities in the Australian state of Victoria extended a lockdown in the capital of Melbourne as the latest outbreak of COVID-19 active cases rose to 60 by Wednesday.

The week-long lockdown, which was due to end on Thursday, will continue for at least another seven days in Melbourne, with restrictions being eased in regional Victoria.

It means the five reasons to leave home will remain in place in Melbourne, which includes shopping for food and supplies, authorized work and study, care and caregiving, exercise and getting vaccinated or tested. However, the travel radius will expand to a 10-km radius from midnight Thursday.

Kids in year 11 and 12 will return to face-to-face learning. A number of outdoor jobs will be permitted during the extended lockdown such as landscaping, painting, installing solar panels, or letterboxing.

In announcing the changes, Acting Premier James Merlino said the extended lockdown will give the authorities a full 14 days, one full cycle of the virus, to make sure they understand how and where this mutation is moving.

"If we let this thing run its course, it will explode, we've got to run this to ground because if we don't, people will die."

The health authorities were also very concerned since they thought the current outbreak is related to a more infectious variant strain detected in India, the Kappa variant, which could make people become infected after brief encounters with strangers.

Previously, infections were anticipated to occur among workplaces, big social events or in the home where there was prolonged exposure, while the highly virulent Kappa strain is occurring in some unusual settings.

Victorian Chief Health Officer Brett Sutton told national broadcaster ABC that at least one in 10 current cases had caught it through those casual contact settings.

"We didn't routinely see it in 2020, but we have to bear in mind that all the variants of concern now are really a step up to some degree. This Kappa variant is more infectious than anything we saw in the beginning and middle of 2020," he said.

Victoria's COVID-19 testing commander Jeroen Weimar said there were four to five instances in the state's latest outbreak of people contracting the virus from "fleeting contact."

"They do not know each other's names and that is very different from what we have seen before," Weimar said, adding that infections could arise from people "brushing past each other."

Among the new cases is a Melbourne resident who went on a camping trip in the neighbouring state of New South Wales (NSW) last month, which made NSW Health on alert.

NSW health department is encouraging anyone who lives in the regions or has visited them which were visited by the case since May 22 to get tested and to isolate even if they have the mildest of symptoms.

The accelerating crisis means the number of exposure sites, where at least one infected people has visited, is ballooning daily.

As of Wednesday, there were more than 350 sites in Victoria, mainly centred around Melbourne, and five in NSW.

Since the outbreak, Victorians have been flocking to vaccination hubs with 20,585 doses being administered on Tuesday, bringing the state's overall total to 513,375.

The Victorian government has also launched a five-day campaign, so workers in private aged-care facilities and residential disability facilities get priority at 10 walk-in vaccination hubs from Wednesday to Sunday.

There has also been a sharp increase in the number of Victorians being tested for the virus, including 51,033 on Tuesday.

The lockdown is the fourth in Victoria since the first coronavirus case was detected in Australia in January 2020. The state has since recorded 20,614 cases and 820 related deaths.