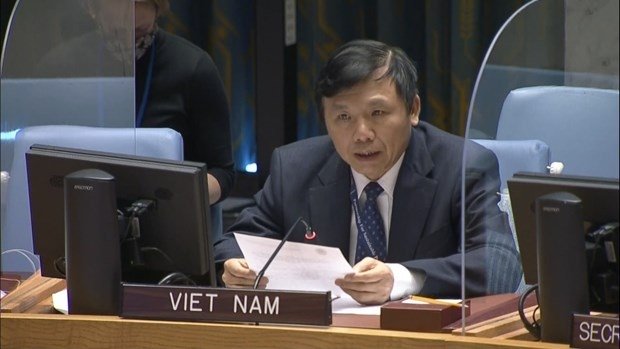 NDO/VNA – Ambassador Dang Dinh Quy, Permanent Representative of Vietnam to the United Nations, has called on parties concerned to promote the resumption of negotiations on the Palestine issue.

At the UN Security Council’s meeting on the Middle East situation, including the Palestine issue, on May 27, Quy affirmed that the only way is the two-state solution, which envisions the establishment of the State of Palestine with East Jerusalem as its capital coexisting peacefully with the State of Israel within safe and internationally-recognised borders on the basis of the pre-1967 borders, in accordance with international law, the UN Charter and the UN’s relevant resolutions.

He welcomed the ceasefire between parties and lauded constructive efforts of countries in the region, the UN, the Middle East Quartet and other international partners in the issue.

Highlighting the need to follow the ceasefire and seek a long-term and sustainable solution to the conflict, he urged all parties to exercise maximum self-restraint and take specific steps to deal with the root cause of the conflict. He also called on Israel to end all settlement activities in the West Bank, including East Jerusalem, the demolition of Palestinians’ houses and deportation of Palestinians.

The Vietnamese representative stressed the significance of ensuring unobstructed humanitarian supplies in the Gaza Strip, hailed the UN Relief and Works Agency for Palestine Refugees in the Near East (UNRWA) and international organisations for offering relief to Palestinians in Gaza during and after the conflict.

He also called on the international community to enhance support for humanitarian and reconstruction activities in Gaza.

Expressing concerns over the possibility of maintaining the ceasefire, participants urged parties concerned to continue exercising maximum self-restraint and refraining from actions that could complicate the situation.