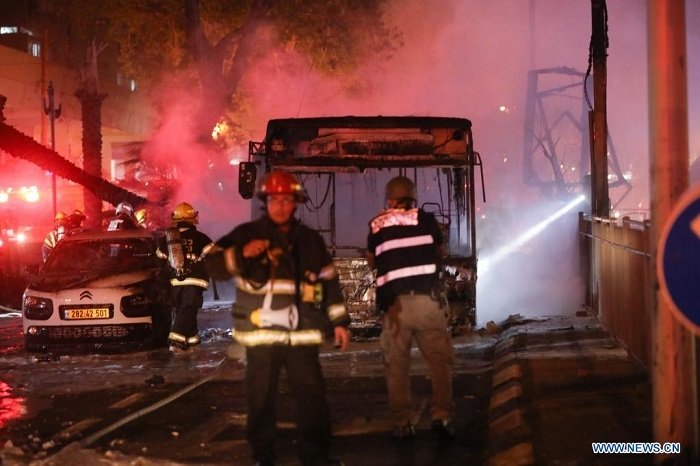 A bus hit by a rocket from the Gaza strip is seen in central Israeli city of Holon, on May 11, 2021. (Photo: JINI via Xinhua)

A state of emergency was announced on Tuesday night in a central Israeli city and Border Police forces were sent there as Arabs and Jews have been clashing in fresh street violence, Israeli authorities said.

The rare move followed an emergency consultation with senior security officials after days of violence in Lod, an Arab-Jewish city east of Tel Aviv, said Prime Minister's Office in a statement.

Israeli Prime Minister Benjamin Netanyahu "instructed to take a firm action against violators of law and order and to beef up the forces in the area in order to restore calm as soon as possible," said the statement.

As days-long riots renewed overnight in major cities, the Defense Minister Benny Gantz said in a statement that he ordered some 16 Border Police companies to be "relocated immediately" from the Israeli-occupied West Bank to Lod and other Arab-Jewish cities.

Lod Mayor Yair Revivo urged the government to impose a curfew in a bid to restore calm. He said that the police "have lost control" over the riots, and synagogues and "hundreds" of vehicles were torched down.

Israel's state-owned public broadcasting corporation Kan reported that Jews were seeking to flee from the Arab-Jewish mixed city as rioters attempted to ignite gas balloons near residential buildings and hurled stones at cars belonging to the Jews.

In Acre in northern Israel, a restaurant belonging to a famous Jewish chef was torched.

Earlier on Tuesday, the police said they have arrested a Jewish man after he allegedly shot and killed an Arab during riots on Monday night in Lod. The victim's funeral on Tuesday afternoon turned into a riot as dozens hurled stones at the police.

Arab citizens of Israel are Palestinians who stayed put during Israel's "Independence War" in 1948.

The violence came as barrages of rockets were fired by Gaza militants at central and southern Israel, while Israel's air force unleashed massive airstrikes at the besieged Palestinian enclave in the worst escalation since 2014.

At least 29 Palestinians in Gaza and three women in Israel have been killed since Monday.