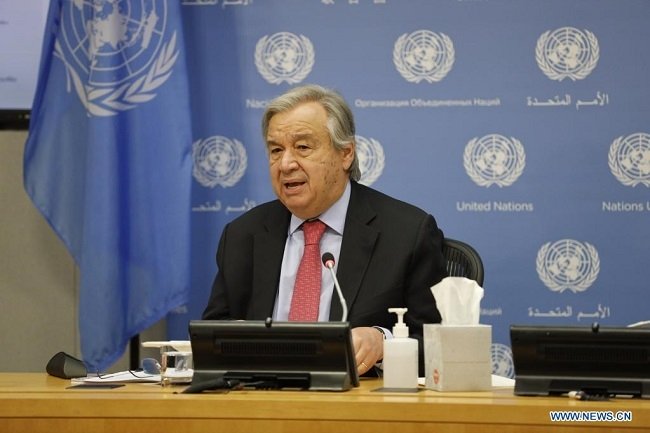 UN Secretary-General Antonio Guterres attends the joint hybrid press conference to launch the State of the Global Climate in 2020 Report at the UN headquarters in New York, on April 19, 2021. (Photo: Xinhua)

United Nations Secretary-General Antonio Guterres on Monday said that the cooperation between China and the United States is important and expressed the hope that big countries will commit to net zero emissions of greenhouse gases by the middle of this century.

"The China-US cooperation is vital. It was vital for the Paris Agreement. It remains vital today, together with other important partners," the secretary-general said at a press conference to launch the State of the

Global Climate in 2020 Report when responding to a question regarding the joint statement issued Sunday by China and the United States on coping with climate change after talks in Shanghai.

The statement was issued after talks between Xie Zhenhua, China's special envoy for climate change affairs and US Special Presidential Envoy for Climate John Kerry from Thursday to Friday in Chinese city of Shanghai.

Replying to a question about his expectations for this week's virtual climate summit, the top UN official said, "My hope is that, in this week's summit, a number of countries, the most important countries in relation to climate change, will be able to commit to net zero emissions of greenhouse gases by the middle of the century and to commit to a drastic reduction of emissions for the next decade in the context of the review of their Nationally Determined Contributions. And this is very important in this summit."

US President Joe Biden on March 26 invited 40 world leaders to attend a virtual summit on climate change on April 22 and 23.

Chinese and Russian leaders are invited to the summit, according to a White House statement.