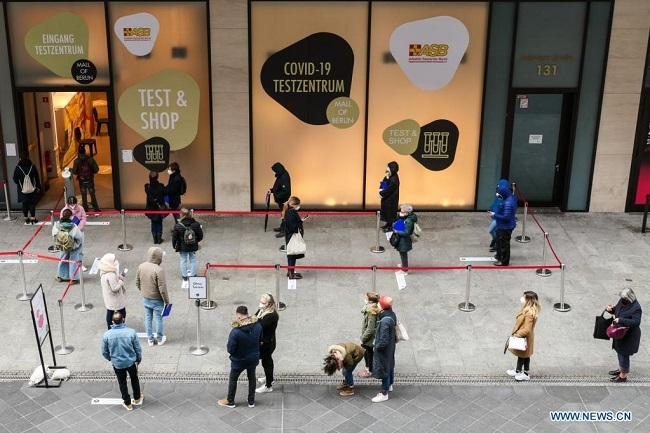 People queue outside a COVID-19 test site at a shopping mall in Berlin, capital of Germany, April 16, 2021. (Photo: Xinhua)

* China and the United States agree that stronger pledges to fight climate change should be introduced before a new round of international talks at the end of the year, the two countries said in a joint statement on Sunday.

* The United States has ordered its non-essential staff in Chad to leave the African country as rebel fighters approached the capital on Sunday after early election results showed President Idriss Deby on course to extend his three-decade rule.

* Iran has started the process of enriching uranium to 60% fissile purity at an above-ground nuclear plant at Natanz, the U.N. nuclear watchdog said on Saturday, confirming earlier statements by Iranian officials.

* Israel and Greece have signed their biggest ever defence procurement deal, which Israel said on Sunday would strengthen political and economic ties between the countries.

* Australia's federal government and the state of South Australia have signed a AUD1.1 billion (US$851 million) deal to finance measures aimed at making energy more affordable and helping to curb carbon emissions.

* Mainland China reported 16 new COVID-19 cases on April 17, up from 15 cases a day earlier, the country's national health authority said on Sunday. The total number of confirmed COVID-19 cases in mainland China now stands at 90,499, while the death toll remained unchanged at 4,636.

* Brazil recorded 67,636 additional confirmed cases of coronavirus in the past 24 hours, along with 2,929 deaths from COVID-19, the Health Ministry said on Saturday. Brazil has registered more than 13.9 million cases since the pandemic began, while the official death toll has risen to 371,678, according to ministry data.

* The number of confirmed coronavirus cases in Germany increased by 19,185 to 3,142,262, data from the Robert Koch Institute (RKI) for infectious diseases showed on Sunday. The reported death toll rose by 67 to 79,914, the tally showed.

* Syria will hold its presidential election on May 26, the country's parliament said on Sunday. The door for nominations will be open as of Monday for 10 days. Syrians abroad will vote on May 20.

* The French government has pledged EUR1 billion (US$1.2 billion) of financial aid for farmers who were worst affected by this month's spring frosts and cold weather, the prime minister's office said late on Saturday.

* The number of coronavirus patients in intensive care units in France has fallen and the number of patients in hospital has also dropped, the health ministry said on Saturday, in a sign that pressure on the medical system is easing.

* More than 600,000 first and second doses of coronavirus vaccine were administered in Britain in the space of 24 hours, according to data released on Saturday.

* Italy reported 310 coronavirus-related deaths on Saturday against 429 the day before, the health ministry said, while the daily tally of new infections edged down to 15,370 from 15,943.

* Tunisia on Saturday announced the closure of all schools until April 30, as well as restrictions on movement, to slow the spread of the novel coronavirus.

* A magnitude 5.9 earthquake on Sunday struck Iran's southern province of Bushehr, where a nuclear power plant is located, but there were no immediate reports of major damage, state television said.