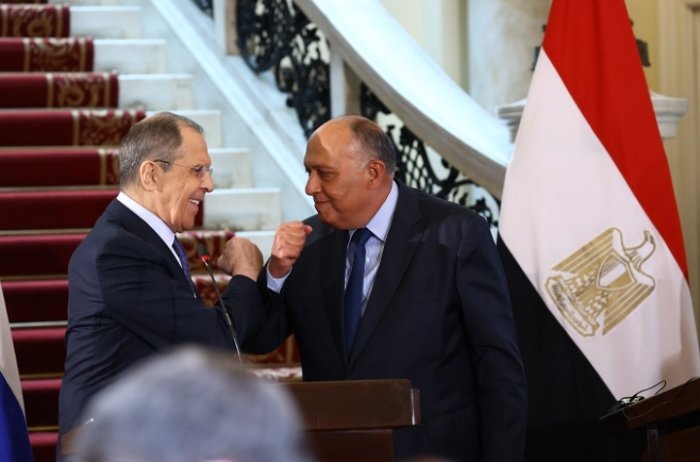 NDO – Russian Foreign Minister Sergey Lavrov recently paid a visit to the Middle East and North Africa (MENA) to discuss bilateral cooperation as well as “hot” international issues. With efforts to promote the effectiveness of its mediating role for a series of crises, Russia continues to maintain its position and enhance its influence in this geopolitically strategic region.

During his two stopovers, in Egypt and Iran, Sergey Lavrov had important meetings with officials in each of the host countries, with the agendas focusing on bilateral collaboration, crises in the region such as Syria and Libya, peace in the Middle East, and the Iran nuclear issue. In addition to discussing ways to bolster bilateral ties across various fields for mutual benefit, Russia and Egypt discussed and agreed to work together to find solutions for many outstanding international issues. After the Egyptian Foreign Minister informed his Russian counterpart about Cairo’s efforts to resolve the Palestinian problem, Russia reaffirmed its commitment to speeding up the Middle East peace process, including utilising the framework of the ‘Munich Quartet’ (Egypt, Jordan, France and Germany) to resume peace negotiations and rebuild trust between Palestine and Israel. Meeting with the Russian Foreign Minister, Egyptian President Abdel Fattah el-Sisi also put the Libyan crisis on the table, in the context of both Cairo and Moscow having recently pushed for diplomatic efforts to resolve the crisis in the North African country. He stressed the need to clear Libya of mercenaries and tackle illegal foreign interference in Libyan affairs.

Discussing the Syrian crisis, Sergey Lavrov affirmed his support for Egypt’s efforts to resolve the conflict in the Middle Eastern nation, speaking highly of Cairo’s central role in regional security and stability. Over the past 10 years, Russia has played an active role in seeking solutions to end the Syrian crisis, contributing significantly to establishing peace and security and promoting the political transition roadmap in the country. Syria is also where Russia’s only naval foothold in the Mediterranean is situated. In Cairo, the Russian Foreign Minister met with the Secretary-General of the Arab League (AL) Ahmed Aboul Gheit to discuss how to deal with disagreements in the region. The two sides exchanged views on a number of regional and international issues, as well as on measures to achieve a political solution to the ongoing crisis in the Arab bloc. Ahmed Aboul Gheit urged Russia to continue playing an active role in maintaining the unity of Syria. Sergey Lavrov announced his support for Syria’s return to the AL in the near future and this was welcomed by the AL leader.

The visit to Iran by Russian Foreign Minister Sergey Lavrov came at a time of tensions in relations between Iran and Israel regarding a recent incident at Iran’s Natanz nuclear facility. This was an opportunity for Russia to show support for Tehran and to try to release the deadlock on the Iran nuclear issue. Participating in a nuclear agreement called the Joint Comprehensive Plan of Action (JCPOA), involving Iran and the P5+1, Russia has always urged the lifting of US sanctions against Tehran. Moscow asserts that Iran recently showed a clear will and desire to cooperate towards the full implementation of JCPOA. With close cooperation on nuclear power, the Russian government recently pledged a EUR1.2 billion loan for Iran’s building of a large power plant in Sirik County just outside the Persian Gulf on the Sea of Oman, south of the country. At the meeting with the Russian Foreign Minister, Iranian President Hassan Rouhani also called for enhanced defence cooperation and increased economic and trade exchange between the two countries. The Iranian leader affirmed that Moscow-Tehran ties should be fostered regardless of external pressures.

Russia has constantly promoted diplomatic efforts to find solutions to the crises in the MENA region. With the MENA occupying a strategic geopolitical position and as an important partner of Russia in many fields such as security, defence and economy, cooperation in the region is always in Russia’s interest. A close “handshake” with countries that have an important role in the MENA can help Russia realise its strategic goals aimed at increasing its influence in this region.