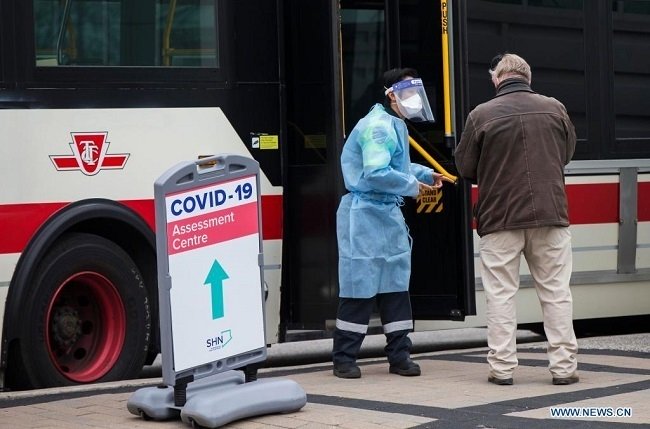 A medical worker talks to a man outside a COVID-19 testing bus in Toronto, Ontario, Canada, on April 13, 2021. Over the past week, there has been an increase of 33 percent in daily case counts with an average of almost 8,100 new cases reported per day, according to the Public Health Agency of Canada on Tuesday. (Photo: Xinhua)

Global cases of the novel coronavirus continued to increase for a seventh consecutive week, with over 4.5 million new cases reported last week, the World Health Organization (WHO) reported early Wednesday on its weekly update.

The number of new deaths increased for the fourth consecutive week, increasing by seven percent compared to last week, with over 76,000 new deaths reported, according to the WHO.

The outbreak was especially violent in India as the country reported 873,296 new cases, an increase of 70 percent compared to last week. It also saw the number of new deaths growing by 51 percent. The United States came the second with a five percent increase of 468,395 new cases; and Brazil listed the third with a rise of 463,092 new cases.

In terms of global COVID-19 new deaths, the South-Asia, Southeast Asia and Western Pacific region saw sharp surges with the Western Pacific displaying an increase of 189 percent in number, the Philippines leading with the grim record of 1,321 new deaths, 400 percent more than last week.

The WHO also noted that existing vaccines have displayed reduced efficacy against variants, even if the related studies remained limited in number.

As an example, the AstraZeneca vaccine saw reduction in post-vaccine neutralization for variant B117, while it saw "substantial reduction" for the variant originating from South Africa.

Earlier this week, the WHO stressed that measures such as wearing masks and hand hygiene were still important as "we are in a critical point of the pandemic right now.".

Today, 13:39
A close-up of an antique gold-painted ceramic set has just been sold for nearly half a billion dong in Hanoi