The greater Tokyo’s prefectural police have started an awareness campaign to inform people about the dangers of illegal gambling. The campaign has been launched at a time when the cases of gambling and gambling-related offenses have increased among the local Vietnamese community. 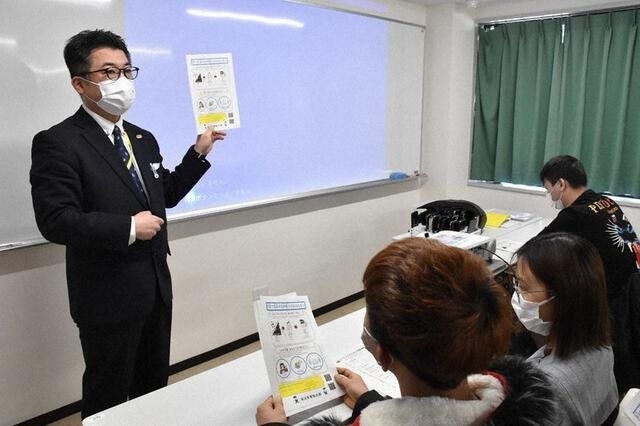 There have been a series of cases where technical interns and students from Vietnam began gambling upon introduction by friends or social media contacts, pushing them into massive debt. In some cases, they have been kidnapped or assaulted by Vietnamese criminal gangs for failing to pay their debts.

"I wanted to win back the money I lost," a Vietnamese technical intern in his 30s told the Mainichi Shimbun. He said that the group running the gambling "lent me money immediately, so I was stuck in an endless cycle." He said he borrowed 30 million yen (about $273,300) over about eight months.

The man fell into a Vietnamese-style betting game using playing cards. Around 30 Vietnamese nationals, including technical interns that have been reported missing, and former students, gathered in an apartment belonging to a fellow gambler. He said that there were wads of 10,000-yen bills totaling at least 10 million yen (roughly $91,100) in the room. Gambling sessions took place at different spots almost every time, and participants were notified on social media where to go. Police believe the system was designed to avoid detection by the authorities.

The man started gambling after his Vietnamese coworker invited him to a session. His monthly salary was 125,000 yen (about $1,138), and he wanted to make more money. But all he got out of the games was rising debt. In spite of this, he managed to return this money, sometimes with assistance from his family. Later, however, he racked up another 8-million-yen debt in a single day. He began to fear for his own safety, and he went to police to seek protection.

Criminal gangs have also used gambling as a pretext to kidnap, confine or injure participants, and demand money from their families. The man said, "I regret my actions very much now. My family has also been put in danger. I'm just worried about my family." 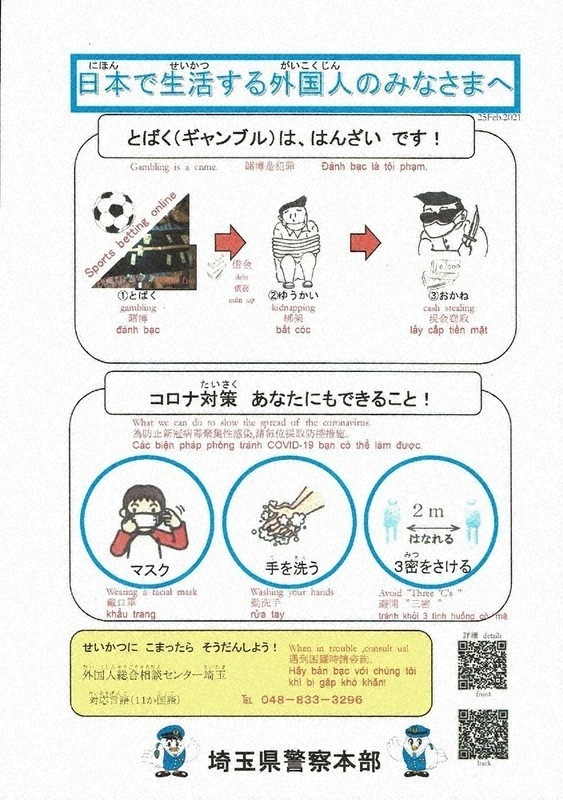 A leaflet created by Saitama Prefectural Police to convey the dangers of gambling in multiple languages is shown in this image provided by the force.

Jiho Yoshimizu, head of the Japan Vietnam Tomoiki Support Group, based in Tokyo's Minato Ward, said that it began receiving more inquiries from Vietnamese nationals involved in gambling and other crime last autumn, as conditions under the coronavirus worsened. A growing number of Vietnamese nationals became unable to return to their home country even though their residency periods had expired. These people were under temporary release from immigration detention facilities and not allowed to work, and many of them have become involved in crime.

"On top of arranging an environment where Vietnamese nationals who can't return to their country are able to work, I'd like public institutions like the police to actively engage in efforts to educate Vietnamese people," said Yoshimizu.

Reportedly, the number of Vietnamese nationals involved in gambling and other gambling-related crimes increased last autumn amid the coronavirus pandemic. The restrictions associated with the Covid-19 situation have made it impossible for a large number of people from Vietnam to return to their home country although their residency period in Japan had expired. Many of these people have become involved in criminal activity, while at the same time being unable to work.

Since February 2021, there have been some guest lectures held by the Saitama Prefectural Police especially for people from Vietnam. The lectures have been aimed at educating them on the illegal nature and dangers of gambling, with a police representative informing the participants in the lecture that gambling is considered a crime in Japan. Vietnamese nationals have also been warned they could get stuck in serious incidents following falling into debt because of their gambling.