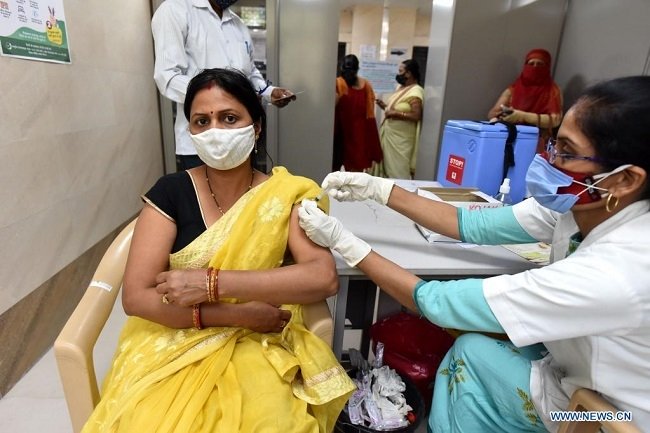 A woman receives a shot of COVID-19 vaccine at a hospital in Prayagraj, India's northern state of Uttar Pradesh, on April 10, 2021. (Photo: Xinhua)

With 904 deaths in the past 24 hours, India's total death toll due to the COVID-19 pandemic surpassed the 170,000 mark to reach 170,179, according to the latest data released by the federal government Monday.

While the figure of new daily COVID-19 cases is highest ever in the country so far, the deaths reported on Monday is the highest in a single day this year.

This is the seventh time within this month and the sixth consecutive day when more than 100,000 new COVID-19 cases were reported in India.

There are still 1,201,009 active cases in the country, while 12,156,529 people have been discharged so far from hospitals after medical treatment.

There was an increase of 92,922 active cases during the previous 24 hours, the highest this year so far.

The number of daily active cases has been on the rise over the past few days, as another wave of COVID-19 looms large in India.

So far over (104,528,565 people have been vaccinated across the country since the nationwide vaccination drive was kicked off on Jan. 16.

Meanwhile, the federal government has ramped up COVID-19 testing facilities across the country, as over 257 million tests have been conducted so far.

The national capital Delhi, which has been one of the most COVID-19 affected places in the country, witnessed over 10,774 new cases and 48 deaths through Sunday.

So far as many as 11,283 people have died in the national capital due to COVID-19, confirmed the Delhi's health department.