It is expected that maximum temperatures in most parts of India will be above normal between April and June. Many parts in north India have been reeling under a heatwave with the mercury touching 40 degrees Celsius-mark, especially in Rajasthan.

According to Skymet Weather, a low-pressure area has formed over the south-east Bay of Bengal and adjoining parts of the south Andaman sea. It will intensify further into a well-marked low.

The maximum temperature dropped by 3 to 4 degrees over parts of Haryana, Delhi, north and east Rajasthan and isolated pockets of north Madhya Pradesh. 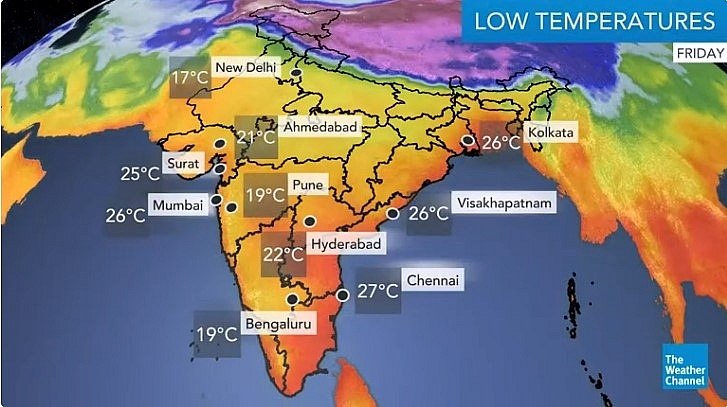 Light rain occurred over Jammu and Kashmir, Gilgit Baltistan and Muzaffarabad. Light to moderate rain and thundershowers with isolated heavy spells occurred over in North East India and parts of Andaman and Nicobar Islands.

During the next 24 hours, strong surface winds, raising dust are expected to continue over Northwest and parts of East India.

Moderate to heavy rain and thundershowers with isolated very heavy spells are possible over Andaman and Nicobar Islands. Sea conditions are expected to remain rough to very rough.

Light to moderate rain with few heavy spells are expected to continue over Northeast India. Light rain with one or two moderate spells may occur over Kerala.

Many parts in north India have been reeling under a heatwave with the mercury touching 40 degrees Celsius-mark, especially in Rajasthan. The India Meteorological Department (IMD) has predicted another heatwave over the plains by April 3.

"April has just begun but considering the heat, it feels like May-June have arrived," news agency ANI quoted a local as saying in Rajasthan's Jodhpur. As per doctors' advice, we are consuming a lot of cool drinks like buttermilk to get through this weather," another local told . Labourers work at a brick kiln on a hot summer day in Noida.(Burhaan Kinu/HT File Photo)

The IMD has already warned that maximum temperatures in most parts of the country will be above normal between April and June. On Tuesday, it sounded a heatwave alert for parts of Telangana for the next three days.

On Monday, the national capital recorded a maximum temperature of 40.1 degree Celsius, the highest temperature record in March in last 76 years.

In fact, March was the warmest in the last 11 years, according to IMD. Kuldeep Shrivastava, Regional Head of IMD Delhi, said that the mean maximum temperature (MMT) for Delhi for March is 33.1 degree Celsius which is 3.5 degree Celsius above normal.

The highest MMT of 34.1 degree Celsius was observed in March, 2010 according to IMD data.

Talking about the situation in plains, IMD Director General Mrutunjay Mohaptra said there was pressure variation between the area stretching from the Gujarat coast to Haryana. In addition to this, there was transfer of heat from Rajasthan which was already reeling under the heatwave. "This led to the heating of plains," he said.

According to Weather.com, until Friday a feeble Western Disturbance (WD) brings isolated snow/rain over the Western Himalayan Region. A fresh WD is set to affect Jammu & Kashmir, Himachal Pradesh, and Uttarakhand from Sunday. It might also affect states in northern India like Punjab and Haryana at times.

Meanwhile, a cyclonic circulation over the Andaman Sea is set to bring widespread rain with some intense thunderstorms, and gusty winds across Andaman & Nicobar Islands on Thursday.

Another cyclonic circulation in Northeastern India is likely to bring moist southerly winds from the Bay of Bengal resulting in widespread rain over Arunachal Pradesh and its adjoining area. Along with thunderstorms and gusty winds, an additional rainfall of 100 mm or more is also expected locally in Arunachal Pradesh between Thursday to Saturday. Further, due to the presence of a trough, Kerala and its adjoining areas will receive intermittent showers and thunderstorms on Thursday.

As for mercury levels, the maximum temperatures are likely to be below normal along the northern plains from Thursday to Saturday. Maximum temperatures have fallen by 2-4°C over most parts of Northwest and Central India leading to the abatement of heatwave conditions over these regions. On the other hand, maximum temperatures of 40°C are expected in some areas of the Indian peninsula during this week.

Maximum temperatures are likely to be above 40°C in some areas of Northern, Central, Western, Eastern, and Southern India. 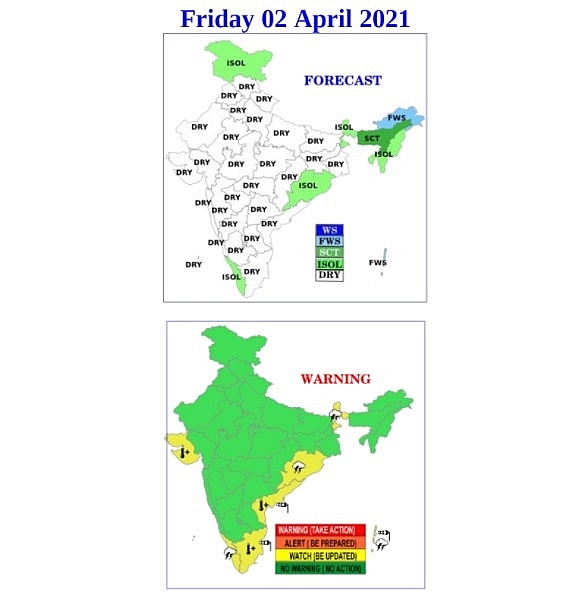