China on Friday imposed sanctions on over a dozen British individuals and entities over what it says are "lies and disinformation" about Xinjiang, in a retaliatory action after the UK and European Union sanctioned Chinese officials for human rights abuses in the region. China announced retaliatory sanctions on senior British politicians including the former leader of the ruling Conservative Party for "maliciously spreading lies and disinformation" about its Xinjiang region. Photo: Business Times

China slapped sanctions on several British politicians and organizations Friday after the U.K. joined the European Union and others in sanctioning Chinese officials accused of human rights abuses in the Xinjiang region. The U.K. responded by accusing China of violating human rights on an “industrial scale.”

China is targeting nine individuals and four entities in the UK, said on Friday

In the latest salvo in its full-bore response to Western criticism, China sanctioned four British institutions and nine individuals, including prominent lawmakers who have criticized the treatment of the Uyghur Muslim minority in Xinjiang. It said they would be barred from visiting Chinese territory and banned from having financial transactions with Chinese citizens and institutions, AP News reported.

The individuals and their relatives are banned from entering China or trading with Chinese citizens and institutions. Any assets they have in the Asian nation will also be frozen, the statement said. The four entities hit are the China Research Group of UK lawmakers, the Conservative Party Human Rights Commission, the Uyghur Tribunal and Essex Court Chambers, said Business Times.

The ministry also said it had summoned the British ambassador to China to protest.

Britain's Foreign Secretary Dominic Raab said in response to the sanctions that the UK "condemn China's attempt to silence those highlighting human rights abuses, at home or abroad, including UK MPs and peers."

"It speaks volumes that, while the UK joins the international community in sanctioning those responsible for human rights abuses, the Chinese government sanctions its critics. If Beijing wants to credibly rebut claims of human rights abuses in Xinjiang, it should allow the UN High Commissioner for Human Rights full access to verify the truth," he added.

He has summoned the Chinese ambassador to the UK.

At a daily news briefing, Chinese Foreign Ministry spokesperson Hua Chunying accused the U.S., the U.K., allied nations and portions of the Western media of collaborating to subvert China’s unity and development.

“For a lengthy period of time, the U.S., U.K and others have felt free to say whatever they like without allowing others to do the same,” Hua said. Those days are over and the West will “have to gradually get used to it,” Hua said. 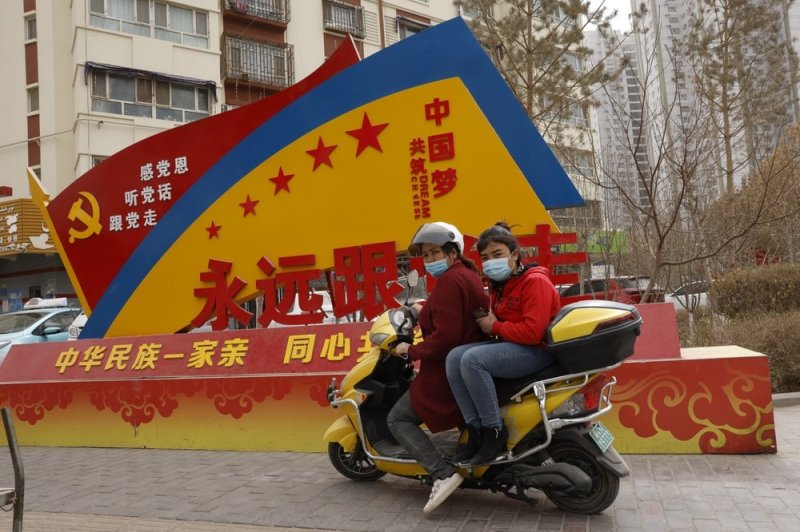 Residents wearing masks pass by government propaganda with slogans some of which read "Forever follow the Party" and "China's Ethnicities One Family" in the city of Aksu in western China's Xinjiang region on Thursday, March 18, 2021. China on Friday announced sanctions on British individuals and entities following the U.K.'s joining the EU and others in sanctioning Chinese officials accused of human rights abuses in the Xinjiang region. Photo: Reuters

"It is tempting to laugh off this measure as a diplomatic tantrum. But in reality, it is profoundly sinister and just serves as a clear demonstration of many of the concerns we have been raising about the direction of China under Xi Jinping," it added.

They join the 10 European individuals and four entities already slapped by Chinese sanctions earlier this week as the diplomatic row over Xinjiang escalates, said Euro News.

British Foreign Secretary Dominic Raab said China’s sanctions were “not going to stop the British government from speaking up about the industrial-scale human rights abuses taking place in Xinjiang.”

He urged Chinese authorities to allow United Nations representatives into Xinjiang to “verify facts” if it wants to rebut claims of rights abuses. China says diplomats are welcome in the region but only under Beijing-imposed conditions.

Beijing is accused of serious abuses towards the Uyghur and other Muslim minority groups including mass arbitrary detention, torture, forced political indoctrination and forced labor in concentration camps of about 1 million people.

Earlier this week, the EU and UK both imposed sanctions on China over Xinjiang. They were the first restrictive measures either side had slapped on China for human rights abuses in over 30 years. They were swiftly followed by Canada and the US.

China’s sanctions are the latest move in an increasingly bitter row over Xinjiang, where Beijing is accused of detaining more than 1 million members of Uyghur and other Muslim minority groups, using forced labor and imposing coercive birth control measures.

Chinese state TV called Thursday for a boycott of Swedish retail chain H&M as Beijing lashed out at foreign clothing and footwear brands following Monday’s decision by the 27-nation European Union, the United States, Britain and Canada to impose travel and financial sanctions on four Chinese officials blamed for abuses in Xinjiang. Cotton and other agricultural products form a major component of the local economy in vast but thinly populated Xinjiang.

Companies ranging from Nike to Burberry that have well-established presences in China were also targeted online, with some Chinese celebrities saying they were severing endorsement deals.