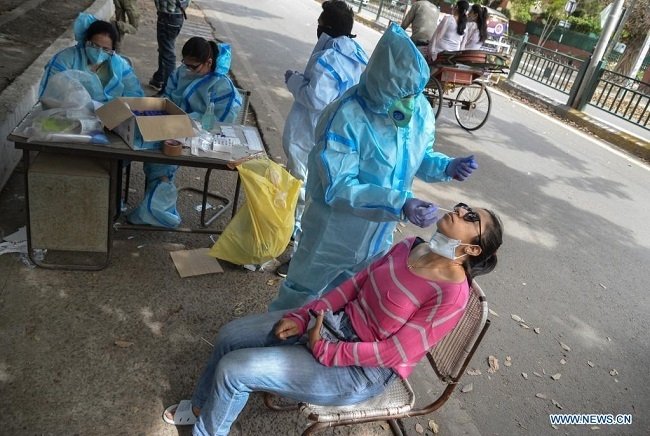 A health worker takes a nasal swab sample from a woman to test with Rapid Antigen Test for the COVID-19 on a roadside during random testing of commuters in Jalandhar district of Punjab, India, March 25, 2021. (Photo: Xinhua)

India's COVID-19 tally reached 11,846,652 on Friday as 59,118 new cases were reported across the country, the highest number this year so far, according to the latest figures released by the federal health ministry.

Besides, 257 deaths since Thursday morning were registered, taking the death toll to 160,949.

There are still 421,066 active cases in the country, while 11,264,637 people have been discharged so far from hospitals after medical treatment.

There was an increase of 25,874 active cases during the previous 24 hours, out of which the maximum cases were reported from the south-western state of Maharashtra.

The number of daily active cases has been on the rise over the past few days as another wave of COVID-19 looms large in India.

India kicked off a nationwide vaccination drive in January, and so far over 55 million people have been vaccinated across the country.

Meanwhile, the federal government has ramped up testing facilities across the country, as more than 238 million tests have been conducted so far.

As many as 238,604,638 tests were conducted till Thursday, out of which 1,100,756 were conducted on Thursday alone, said the latest data issued by the Indian Council of Medical Research (ICMR) on Friday.

The national capital Delhi, one of the most affected places in the country, witnessed 1,515 new cases and five deaths through Thursday.

So far as many as 10,978 people have died in the national capital due to COVID-19, confirmed Delhi's health department.