Major newspapers in Laos have published articles highlighting the opening ceremony of the 13th National Congress of the Communist Party of Vietnam (CPV). 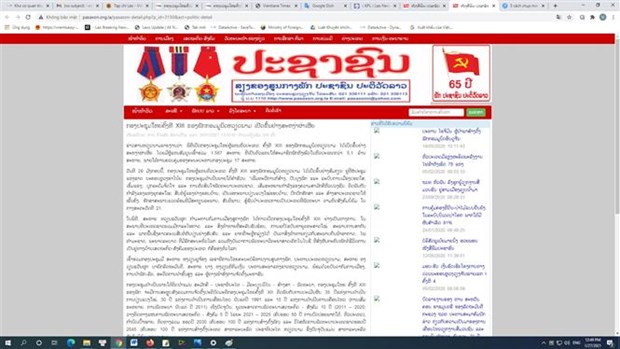 The Pasaxon (People’s) Newspaper wrote on January 27 that the opening ceremony of the 13th National Congress of the CPV was held solemnly on January 26 with the attendance of 1,587 delegates representing over 5.1 million Party members nationwide, under the chair of 17 members of the Presidium.

It stressed that the congress has the theme “Strengthening the building and rectification of the Party and the political system into purity and strength; rousing the will and determination for national development and promoting the strength of the great national unity bloc in combination with the power of the era; continuing to comprehensively and synchronously accelerate the cause of reform; constructing and firmly safeguarding the Fatherland and maintaining a peaceful and stable environment; and striving to turn Vietnam into a developed, socialist-oriented nation by the middle of the 21st century.”

The paper said the congress will review the implementation of the Resolution of the 12th National Party Congress, 35 years of implementing the “Doi Moi” (Renewal) process, 30 years of implementing the 1991 Political Platform, 10 years of implementing the amended Political Platform (supplemented and developed in 2011) and the National Socio-economic Development Strategy 2011-2020; setting out socio-economic development orientations and tasks for 2021-2025 (the 50th anniversary of the liberation of the South and national reunification), and determining goals and orientations to 2030 (the 100th founding anniversary of the Party) and a vision for national development to 2045 (the 100th founding anniversary of the Democratic Republic of Vietnam, now the Socialist Republic of Vietnam).

Meanwhile, the Lao Phathana News quoted Party General Secretary and State President Nguyen Phu Trong as saying that the 13th National Party Congress is a political event of extreme importance in the process of carrying forward comprehensive and synchronous reforms for global integration and national development. The Vietnamese people believe in and look forward to sound policies being adopted at the congress.

The Pathet Lao Newspaper of the Lao News Agency (KPL), said that, in his opening speech, Party General Secretary and State President Nguyen Phu Trong highlighted Vietnam’s achievements last year, with economic growth of 2.91 percent - one of the highest worldwide.

The article said Vietnam has outlined major orientations for the country’s key issues for the next decade, adding that the 13th tenure will mark a new development step in the cause of renewal.

It quoted the top leader as saying that past lessons will lay an important foundation for the Party to firmly overcome new challenges and complete harder tasks during the new tenure.

The Vientiane Times, the only English-language newspaper in Laos, also covered the opening of the congress in its January 27 issue./.VNA