Seattle seeks comfort from its notorious dampness in bowls of phở, and banh mì shops dominate the sandwich landscape around the city. But only in the blocks surrounding the corner of 12th Ave. S. and S. Jackson St. do the diacritics dominate on street signs and buildings, boasting not just of the most famous dishes, but of groceries, tea shops, and restaurants catering to diaspora Vietnamese immigrants and their descendants.

The name “Little Saigon” for this section of Seattle’s International District came into use in 1984, two years after Phở Bắc opened the city’s first phở shop there and nine years after Washington’s governor invited Vietnamese refugees to settle in the state. A timeline on the wall of the Friends of Little Sai Gòn community center, which opened in 2021, tracks the line from those events through the neighborhood’s current challenges: a more spread out Vietnamese American population, gentrification in the coveted central location, and a generation of original business owners hitting retirement age.

Hello Em Viet Coffee & Roastery shares space with the community center and represents another facet of the neighborhood: a small emerging group of second-generation entrepreneurs, not just taking over their parents’ shops and restaurants, but expanding the idea of what Vietnamese American-owned businesses look like. Co-owner Yenvy Pham grew up watching her parents run Phở Bắc, that first phở shop, and now serves banh-mini – banh mì griddled on a panini press – and Milo-whipped egg clouds atop ca phe sữa đa at Hello Em.

“It’s a very challenging neighborhood,” Pham says. “We’re going through so much.” In the last decade, the area gained transit connections to nearby neighborhoods with the opening of a streetcar route, large shelters for Seattle’s houseless population, and an influx of high-density housing units (some designated for low-income residents). Those changes, magnified and multiplied by the pandemic, brought additional difficulties for business owners. “It’s extremely ugly,” says Pham. “But within that ugliness, there is so much personality.”

Organizations like the decade-old Friends of Little Saigon and businesses like Pham’s proactively work to showcase the neighborhood’s potential, and the food scene leads the way. “The handful of us that have survived the last 30 or 40 years, we have relationships with each other,” Pham says, pointing out other second-generation owners, including the area’s original Vietnamese grocery store, Viet Wah, which opened in 1981. She sees her generation as more collaborative, working together to cement the neighborhood as a destination for noodle bowls and fish sauce shopping, but also as a community.

The same group of kids that grew up in their parents’ restaurants during an era when the Vietnamese church anchored the area cheer each other on as they take over the family businesses. The phở shops and Vietnamese delis that form the heart of the constantly evolving neighborhood get a new look and feel from the bright minds of the next generation, joined by a thriving group of entrepreneurs. The church moved to Tukwila years ago, but Pham and her cohort still see the neighborhood’s past as a jumping off point for its future. “We’re here, we’re not going anywhere,” says Pham. “It’s fun to see it grow.”

The old-school delis of Little Saigon fed the new immigrants of the '80s the familiar foods of home and now feed their children the comfort foods of a faraway land. Meanwhile, those kids look to fill in the gaps in the neighborhood's culinary repertoire, opening shops that make fresh noodles and center Vietnam's coffee culture. They take inspiration from their parents' generation in spirit and combine it with the American world in which they were steeped. The result is today's Little Saigon, a block-by-block journey through Vietnamese American food, from the time when a simple phở shop broke new ground to current spots inspired by modern Vietnamese food culture. 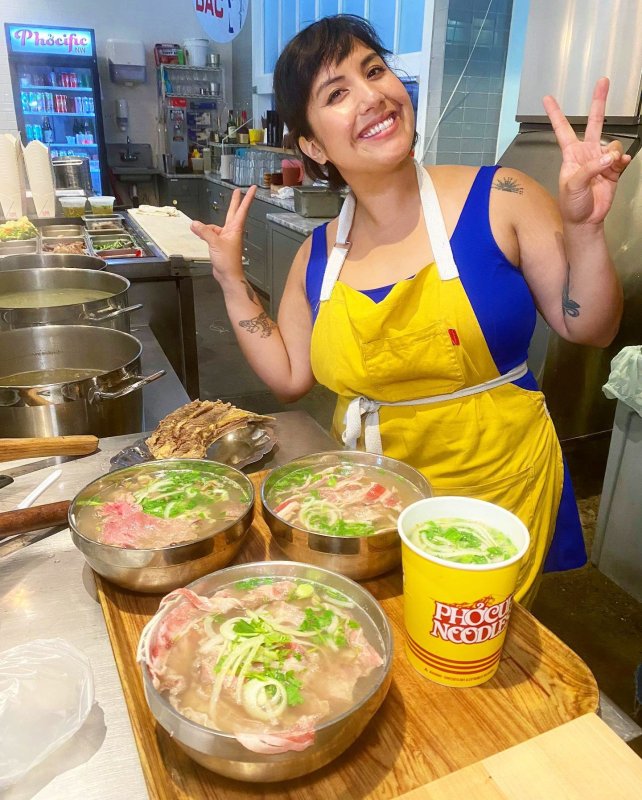 Yenvy and Quynh Pham’s parents opened the boat-shaped Phở Bắc at 14th and Jackson in 1982. Now phở shops strew the city and the next generation runs the homegrown mini chain, including this flagship restaurant just steps from the first one where they show how traditional food fits into a modern setting. A neon sign on the Instagram-friendly white walls welcomes diners to the "Phocific Northwest" and oversized beef short ribs stick out from a bowl of noodle soup made from the original Phở Bắc recipe. Dishes like bun bò Huế hew traditional, while others use the classics as a jumping off point. For instance, their phở fries turn the soup into a gravy to smother French fries and are served with a dressing of pickled vegetables and fried shallots.

Despite Seattle’s stellar reputation for phở, nobody made the soup using fresh rice noodles until Nick Bui and KV Tran opened Dong Thap Noodles in 2015. After a series of viral videos for the restaurant’s “Super Bowl Challenge,” featuring three liters of broth and four pounds each of noodles and meat, Bui and Tran worked around the clock to keep their commitment to quality. Though lines eventually died down, the fresh noodles in their phở, bun, banh canh, and hủ tiếu remain the best in town. 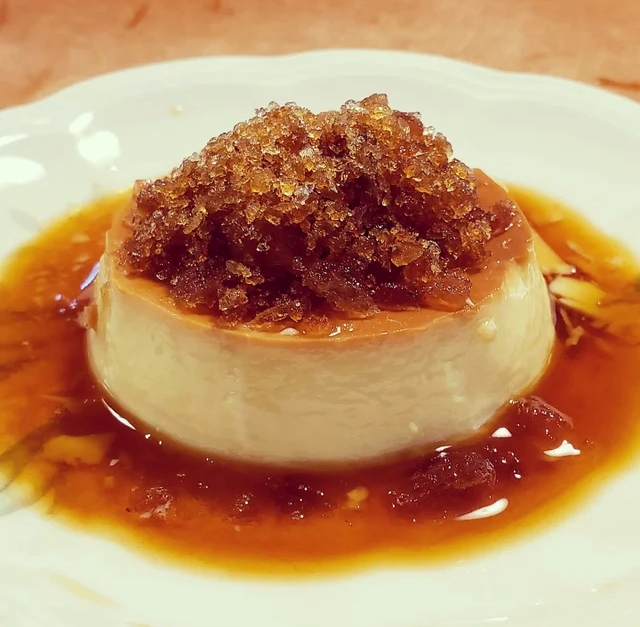 In a single year, Seattle went from no Vietnamese coffeehouses to four of them, and Phin represents the new class’s commitment to honoring, sharing, and evolving Vietnamese coffee traditions. Of the four, only Phin eschews an espresso machine, instead of making every drink with its namesake tool and even making its own condensed milk and yogurt.

Among so many phở specialists, Hue Ký Mì Gia is a Chinese-Vietnamese noodle spot that instead stands out for its mì vịt tiềm, featuring silky yellow egg noodles and deep, rich duck broth. Nearly every table starts with an order of the shatteringly crisp and explosively flavorful canh ga chien bơ, which rank among the best chicken wings in town. The same family owns the excellent banh mì shop down the street, Lan Hue. 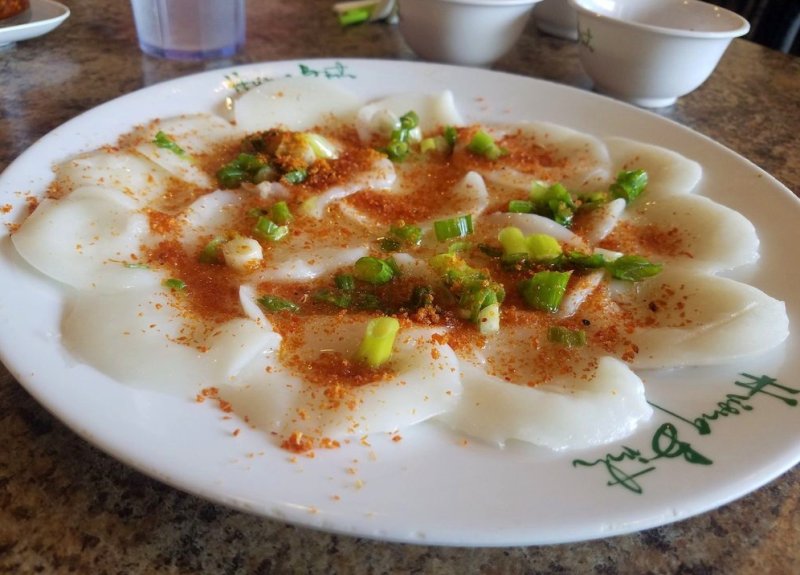 An anchor of Seattle’s Little Saigon since it opened in the late ‘80s, banh hỏi specialist Hương Bình long served dishes seen in few other Vietnamese restaurants around town. While the original owners sold it in 2019, the new owners carry on serving banh ưot and squeezing fresh sugar cane juice for customers in search of the classics.

With a sprawling food menu, many martini options, and shiny decor, Tamarind Tree debuted in 2004 and brought national acclaim to its corner of Little Saigon. In the years since, a slew of imitators made a genre of Tamarind Tree’s upscale feel, affordable prices, and incredible food from all over Vietnam. But the original still serves seven courses of beef ($50 at lunch, $59 at dinner, for two people) and banana blossom coladas better than anyone else. 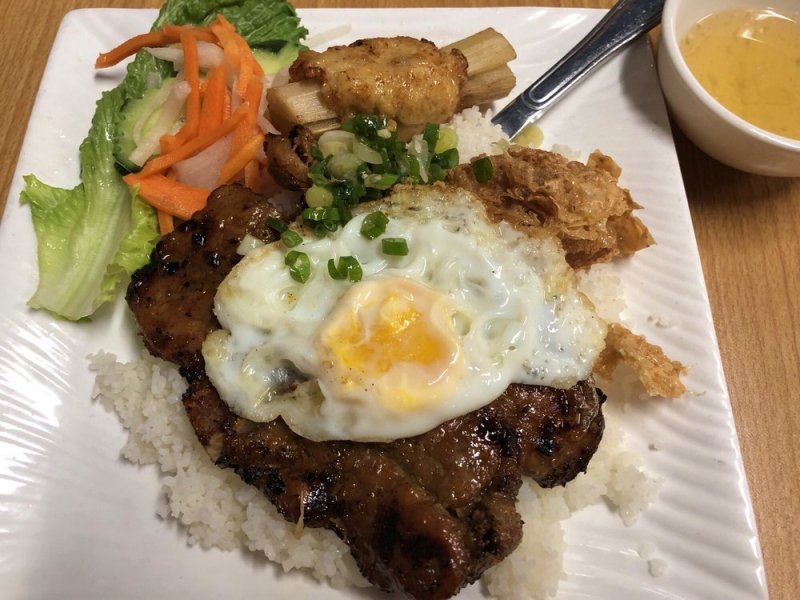 While Tamarind Tree attracts the see-and-be-seen crowd, families bustle into next door neighbor Vietnam House in search of the opposite: no-frills homestyle comfort food like broken rice with grilled pork chop and a fried egg. It offers something for everyone, literally, with more than 100 menu options – not including the specials scrawled on erasable boards and Post-it notes along the walls – including staples like bun rieu cua, and rarer finds like geoduck salad. 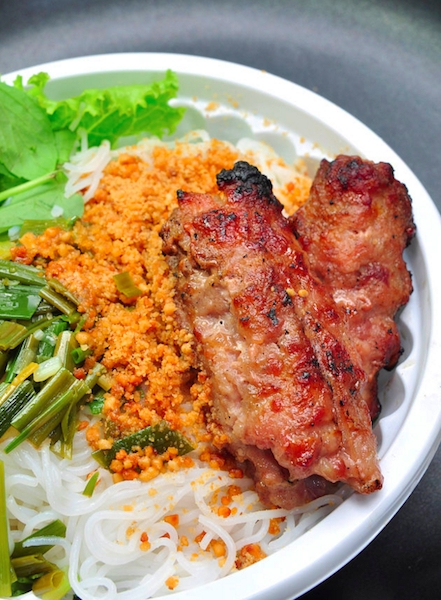 In the face of gentrification, many of Little Saigon’s classic Vietnamese delis closed up, like Seattle Deli, or remodeled to meet the neighborhood’s changing vibes, like Thanh Son Tofu (described by Seattle Met as “more Vegas than Viet”). But Saigon Deli carries on exactly as ever: with absurdly cheap banh mì and overflowing tables of plastic-wrapped trays of nem, chả lụa, banh bot lọc, and so much more.