Vast cinnamon forests are gradually covering many villages in the border district of Que Phong, Nghe An. A tree that is considered a “symbol” is gradually returning to its original position in the ancient land of Phu Quy…

Cinnamon – “symbol” on the borderland

In the past, they knew cinnamon trees from natural forests, then cinnamon trees grew naturally interspersed with other forest trees. Cinnamon at that time was very much, most of which are present-day Quy Chau and Que Phong areas. 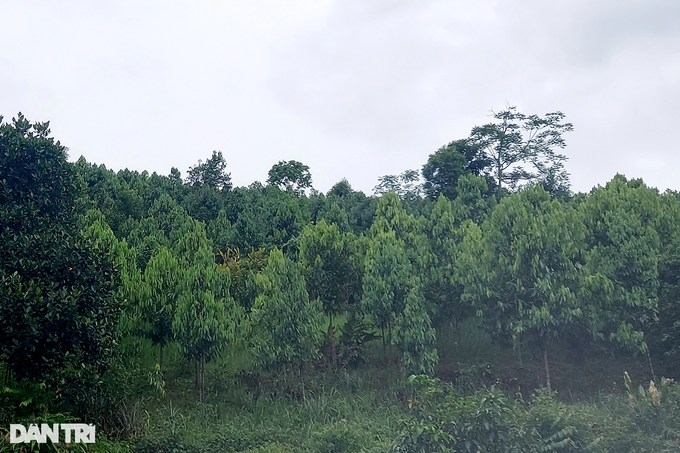 The green cinnamon forests throughout the village of Que Phong border district.

Along with the shrinking of the natural forests over time, the ancient cinnamon trees were gradually cut down to sell to traders at a price that many poor people in the highlands at that time even worked hard. Life is not sure to dare to dream. At that time, the cinnamon tree seemed to be the “symbol” of this land.

Mr. Bui Van Hung, from Chau Phong commune, Quy Chau district, who was once a cinnamon trader, recalls: “At that time, the price of cinnamon bark was very expensive. Cinnamon trees in the forest were therefore exploited and stolen by many people. At that time, forest rangers, police and authorities strictly checked and handled them, but because of the expensive price of cinnamon, people still went to the forest to steal.”

“When I grew up, I saw old cinnamon trees in the forest, but then because of the expensive price of cinnamon, many traders down the river went to find and buy them, so the villagers went to the forest to steal and sell for a profit. Gradually, the forest cinnamon near like all…”, Mr. Tuan recounted. Cinnamon cinnamon nursery in Na Chang village, Tien Phong commune with a scale of over 10 thousand trees to supply people to expand the area of ​​cinnamon trees.

Mr. Ha Minh Tuan – Secretary of the Party Committee of Chau Kim Commune, Que Phong District, on the way to our family’s 3-hectare farm, said: “In the past, cinnamon mainly grew naturally, but then people exploited it illegally. so many large trees were almost cut down.In our Chau Kim commune, some areas still have trees with a diameter of 10-20cm.After the policy of land and forest allocation, the forests are almost already have owners, so now people can protect the natural cinnamon tree quite a lot.”

Tuan’s family farm is not large. Only about 3 hectares, but there are enough streams, hills and many lakes dug in the shape of a ladder to raise fish and water to irrigate the family’s yellow flower tea nursery.

Talking more about the cinnamon tree, Mr. Tuan, said that the family’s farm is about 3 hectares wide, the cinnamon tree occupies about 2 hectares. The large cinnamon trees that grow naturally are left over, while the smaller ones are family planted over the years. Cultivation of cinnamon trees is to harvest leaves and branches to extract essential oils, while the bark is sold to traders at a high price. 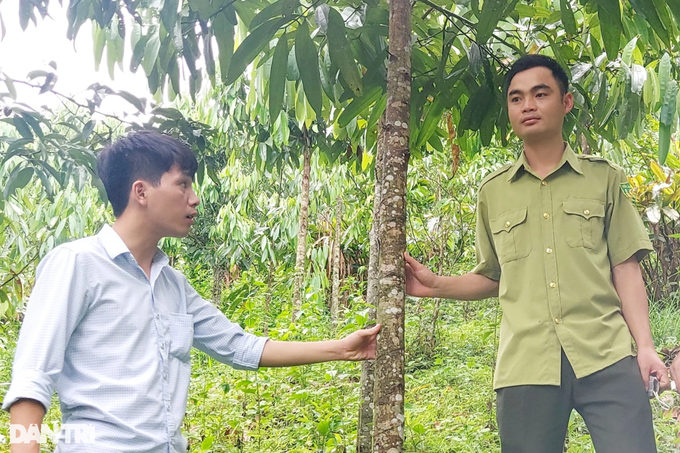 Officers of Pu Hoat Nature Reserve guide people on how to care for cinnamon trees.

“The villagers here are very fond of growing cinnamon. In the past, there was a time when they said “no” to this tree because it was cheap at that time, their lives were difficult, so they switched to growing acacia trees for earlier harvest. However, recently, after selling acacia, they switched to growing cinnamon because of the outstanding economic benefits that this tree brings,” Manh said. Mr. Ngan Van Tuan, who owns about 10,000 cinnamon trees on an area of ​​more than 4 hectares in Na Ham village, said: “After resettling in Na Ham village from the Hua Na hydroelectric project, I started planting them. cinnamon tree since 2004. At that time, the price of cinnamon traders has started to increase, moreover, I personally think that cinnamon is a native tree. The development is very good. The future will be worth waiting for…”.

According to Mr. Tuan, in recent years, thanks to the mobilization of the staff of the Management Board of Pu Hoat Nature Reserve as well as support in plant varieties, techniques and fertilizers, people like him are very confident. Planting this tree to replace acacia has many risks of falling due to storms and low economic value.

“Officer Pu Hoat instructed us to plant cinnamon, each tree must be 3 to 3.5m apart; dig a hole 20x20cm deep, fertilizer should not be applied much because cinnamon is a hot tree… Mr. Tuan added.

Mr. Lang Van Chau, from Na Ham village, Thong Thu commune, confided that: In the past, the family also planted acacia trees, from 5-7 years to harvest, but the investment in seeds, fertilizers, fences, etc. care… very high investment costs; Especially in mountainous areas, it is also prone to whirlwinds, causing the acacia to be broken a lot, and the yield is low, so the harvest is not much. 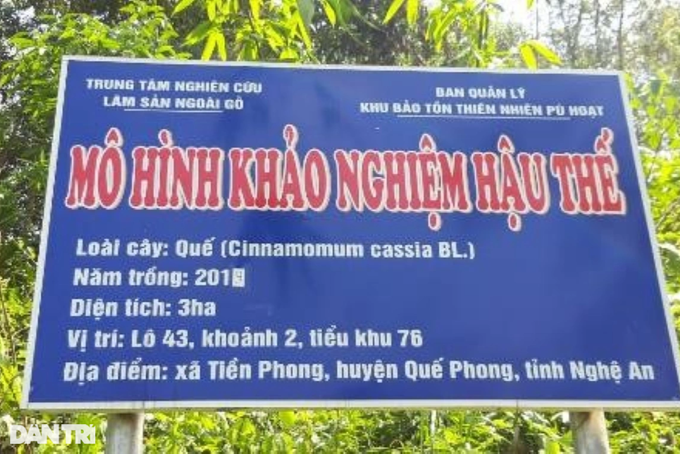 After researching, Mr. Chau’s family saw the value of growing cinnamon trees, so since 2014 he has planted 7,000 trees on an area of ​​​​about 2 hectares.

“Cinnamon trees grow very well, harvest the pruning part, the leaves are sold to traders to extract essential oil. Each time such ornamental pruning can also sell for several million dong. For short, long-term maintenance, cinnamon only needs to be planted a few times. three years is pruning branches to sell, for income, just to “feed” the trunk, for the tree to grow faster.The part of the harvest from pruning branches and leaves of cinnamon trees to turn around to invest in fertilizer, labor and care. care and other investment costs…”, Mr. Chau, excitedly said.

Mr. Nguyen Van Sinh – Director of the Management Board of Pu Hoat Nature Reserve knows that since 2018, the Management Board of the Conservation Area in collaboration with the Research Center for Non-timber Forest Products has conducted an investigation, assessment, selection of dominant cinnamon trees in planted forests in Tien Phong commune, Muong Noc commune with a rigorous process are brought to Na Chang seed nursery, Tien Phong commune.

Accordingly, cinnamon trees were collected and selected from hundreds of households, and the average values ​​of diameter, peak height, height under branches, canopy diameter, and thickness of bark on the tree were calculated on the questionnaire. check the dominant tree.

“Out of thousands of trees, experts only selected 10 dominant trees that met the standards. These trees, after being appraised, recognized by the Department, recognized and granted certificates, have been prepared for management records to serve the multiplication. long-term seed,” said Mr. Sinh. 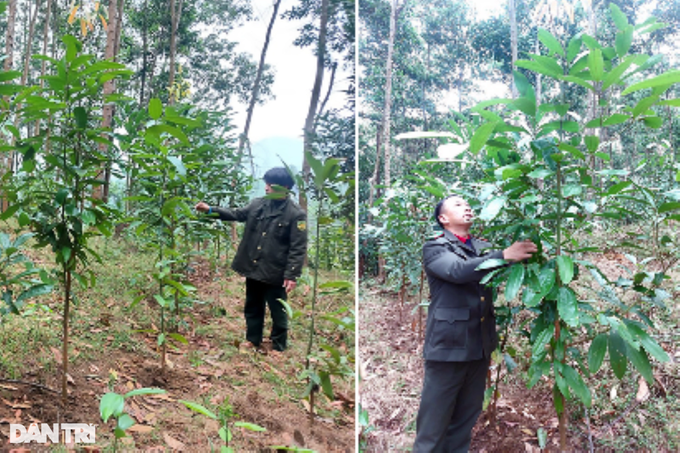 “Cinnamon in this land is a specialty tree, its cinnamon essential oil has superior parameters compared to cinnamon varieties in other localities. Cinnamon is a precious raw material in the pharmaceutical and food industries, cinnamon wood also Therefore, cinnamon is a multi-purpose tree that not only contributes to poverty alleviation, but is expected to be a rich tree for people in remote and remote areas of the mountainous district of Que Phong.” Mr. Sinh added.

At Na Chang nursery, there are over 100,000 cinnamon trees over 4 months old. Seedlings when 1 year old will begin to be eligible to supply for farmers. From 2017 up to now, with the support of seeds and techniques from the Management Board of Pu Hoat Nature Reserve, people in many communes such as Thong Thu, Dong Van, Tien Phong, Hanh Dich… have planted more than 250ha of trees. cinnamon.