Home / Travel
Listen to the “fisherman” tell the story of the feat of hunting “water monsters” on the Serepok River
duonghanhnguyen 24-01-2023, 17:02

Serepok is the only river in the Central Highlands that does not follow the rules from its source downstream to the great sea like other rivers. Serepok is conflated by two streams Krong No (father river) and Krong Ana (mother river), originating from Dak Lak, crossing Dak Nong territory, flowing upstream, to Cambodia, and then entering the river. The Mekong flows into the great sea.

On this river with many rapids and waterfalls converge countless rare and precious fish species such as: The siamese crocodile, buffalo snout, oil pan, red-tailed snout, climbing, giant strabismus, melon stripe, gray horse… Red is the “water monster” that appears the most, becoming a famous fish associated with the river flowing backwards, with the Central Highlands. 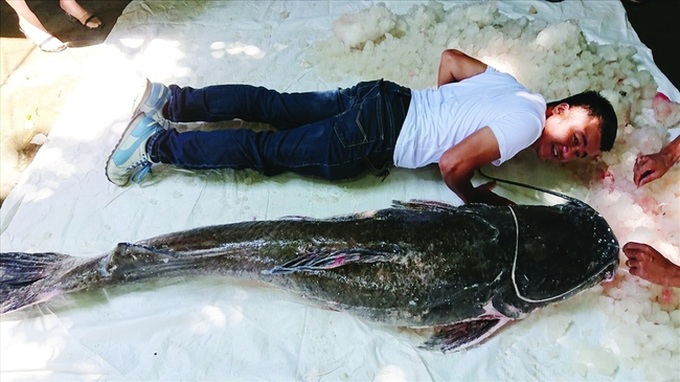 “Square” fish is long, as big as an adult. Photo: D.VG

For many years, residents on both sides of the river have taken fishing as a livelihood. Mr. Y Brui Ktur (Buor village, Tam Thang commune, Cu Jut district, Dak Nong) shared that he grew up on the banks of the Serepok River and from a young age followed his father to cast a fishing net. In his memory, the Serepok River is full of fish, especially the red-tailed pompano. In the late afternoon, he often followed his father to the river to spread the net, the next morning to remove, the fish was stuck in a dense net. He once caught red-tailed trout weighing tens of kilograms.

In the days of floating on the river, Mr. Y Brui had many times encountered the “water monster” of the red-tailed mollusk, which lived for a long time and weighed tens of kilograms. “This fish likes whirling water, dangerous rapids. Every time they appear, they stir up the whole water, anyone who is not steady in their rowing can easily capsize the boat,” he said.

According to the people living along the Serepok River, the “terrible” red-tailed pompano occurs most in the flood season. When hunting a fish as big as a tree stump, the owner must make an offering to Giang (the god). Wanting to catch big fish, hunters often throw spears or pound a type of forest leaves and put them in a rock hole in the river. This leaf is not poisonous, just as a form of anesthetic, to tame the power of large fish. However, people rarely catch big fish because they consider them to be god fish and dare not eat them. In addition, people in the village also adhere to customary laws, do not catch fish in the spawning season, do not destroy small fish because they let them reproduce… 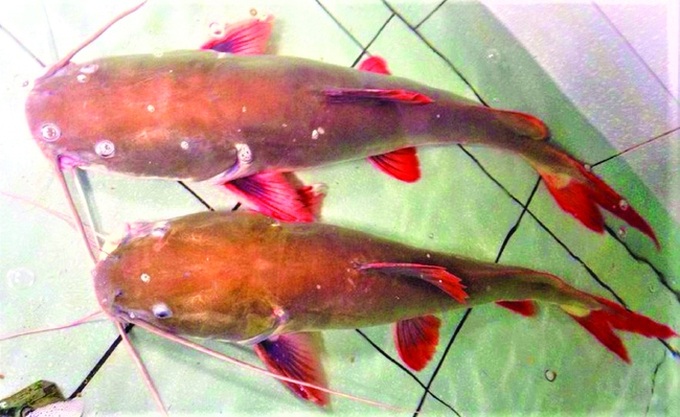 A salmon was purchased by the restaurant. Photo: VG

However, over time, the hunting of fish on the Serepok River changed, people hunted too much, not to mention the eradication of fishing (electrical stimulation, minesweeping, etc.), making fish resources scarce. As proof, Mr. Y Brui took me to the bank of the Serepok River – where he had already set up his net last night. In a small corrugated iron boat, Mr. Y Brui rowed from one side to the other, unloading the net, but there were no fish. “There are very few fish now. Many days, I cast a heavy net without any fish” – Mr. Y Brui sighed.

Mr. Y Baeban (head of Buor village, Tam Thang commune) said that in the past, many people in the village worked as a fisherman on the Serepok River to make a living. But, in recent years, fish resources are scarce, so many people change jobs and work as hired laborers everywhere. In the village, there are only a few people like Y Brui, Y Bue Ktuor… still clinging to their jobs.

Mr. Ha Van Canh (residing in Phu Son village, Cu Po commune, Cu Jut district) – one of the “fish killers” on the Serepok River, said that the fishing season must be from February onwards. For many years in the profession, Mr. Canh admits, the fish resources in the river are not as abundant as before, especially the big ones like red-tailed trout.

Canh has been fishing for lentils since he was 19 years old. At that time, he went to the river to help his uncle catch fish, and saw that fishing for high income was quite leisure, so he decided to follow the profession. He said, the time with the most fish is in the rainy season. Since entering the profession, Mr. Canh has caught the heaviest fish of more than 40kg, in 2014. According to Mr. Canh, in Phu Son village, in addition to him, there are dozens of other “fish killers” who practice catching fish on the river. Backflow. In order to catch “terrible” trout, the preparation of bait is very important. Pangasius usually eats bait catfish and earthworms. When baiting into the hook, the catfish must be alive to lure the trout to eat…

A restaurant manager specializing in providing and processing dishes from the famous Langur in Hoa Phu Commune (Buon Ma Thuot City, Dak Lak) said that the natural salmon on the river has firm, tough, crispy meat. characteristic sweet and aromatic taste. Thanks to that, this fish is very popular with customers from all over the world. This restaurant once purchased an 85kg red-tailed trout in 2019, caught by a fisherman. For big fish, the restaurant sells for 400,000-550,000 VND/kg, smaller fish ranges from 300,000-350,000 VND/kg. The specialty of the salmon is stir-fried fish heart, grilled salmon with turmeric, grilled salmon with salt and pepper, etc. ($1=24,000 VND)