At midday, with the strong howling wind blowing on both sides of the river, we caught sight of a blind man diving and catching crabs, fishing with his bare hands like a sighted person…

Returning to Ba Hon Co (Kien Luong district, Kien Giang province) on these days, we feel the hustle and bustle of the people here for the year-end seafood harvest. Here, ask Mr. Chin Dou (Vuong Hoai An – 58 years old) who knows. Because the man was blind from a young age but had a talent for scuba diving to catch crabs and fish as proficiently as ‘otter’. 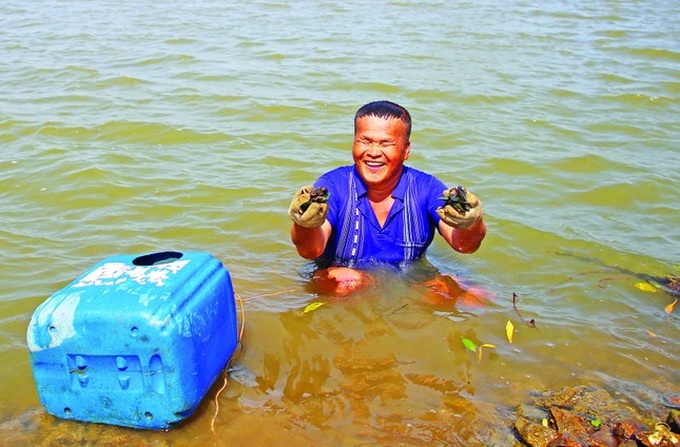 Mr. Chin Dou is happy when diving and catching seafood in the sea

“The hardest thing for me is the things I’ve never done. And what I’ve done is not difficult. I plan to stick to the profession for another 10 years, but I don’t know if my health will allow it. Because I try to accumulate money. he saved some money to take care of his grandson’s education, “- Mr. Chin Dou confided.

The sound of the motorbike stopped suddenly behind me, I caught a glimpse of the blind old man telling the girl: “Go to the old place at 15 o’clock to pick up dad”. The body is solid, toned, few people think that the man has more than 30 years of scuba diving in the dark. Without a hose, protective gear, this blind man’s tools are very simple, only gloves, a net, a homemade seafood container, an oyster hammer and a bottle of drinking water.

Standing on the beach, the blind old man tied one end of the rope to the seafood container, the other end tied to his body. After that, he swam a few dozen meters away from the shore, took a deep breath, and then dived into the sea.

The north wind blew strongly, the waves on the sea surface at Ba Hon Co hit hard from one wave to another. I watched the barrel bobbing in the sea to keep an eye on him.

A few minutes later, Mr. Chin Lieu emerged from the water with a cheerful expression as if he had just picked up a treasure. With one hand he stroked his face, the other hand held a “terrible” rock crab that was wriggling to find a way to escape, making many people on the shore surprised and admired.

For some types of fish with spines such as grouper, catfish, etc., to catch them, the right hand should be placed close to the ground and caught upside down. At that time, my 2 fingers got into the gills, so the fish could not struggle. That was catching fish, and when I discovered that there were crabs in the cave, I threaded a pre-wrapped net as big as my fist. When the crab clamped onto the net roll, I grabbed the two claws to pull it out. Sometimes the broken crab runs away, I have to listen to which direction it runs to use my legs to catch it.” Ms. Vuong Thi Kim Vui prepares tools to take him to the beach, more than 2km away from home, to catch seafood.

According to Mr. Chin Dou, more than 30 years of making a living by this profession, he has accumulated a lot of experience. Remember when he first went scuba diving, he could only catch clams, oysters… and then gradually caught crabs, fish, and squid. On average, he catches 5-6 kilograms of crabs, crabs, fish, oysters, etc., and his children bring them to the market to sell on average for 150,000 to 300,000 VND per day. However, when the sea was rough, he couldn’t catch any fish, so Mr. Chin Dou stayed at home and missed the smell of the sea.

With the name Nine Doi

Sharing with Tien Phong, Mr. Chin Dou said that when he was 7 years old, he had a disease that caused his eyes to fade. Then by the age of 22, his eyes could no longer see. At that time, the poor family had many brothers and sisters. His parents also tried to cure him, but he couldn’t, so he accepted to live with blindness and found a way to live independently.

But thinking about the situation, Mr. Chin Dou asked his brothers to let him practice going to the sea. At first, he went down to the beach to fish for herring and fished near the shore to get used to it. Everything is only touched and felt through the hands. After that, he asked to go fishing in open nets.

“At first, they didn’t let me go, afraid of danger. I begged for permission. When the ship went out to sea, the waves were very rough, so it was very difficult to walk. There were times when I plunged into the sea. But then I walked away. become familiar”, Mr. Chin Dou laughed.

Gradually, he went on a stable fishing boat and got better at diving, so his family let him go far away. During a fishing trip on Tho Chu island, he “described right-wing conflict” to “conquer” a giant grouper hooked.

“Sometimes when it was cold, seeing him ashore with trembling legs felt a pain in his heart. Here, everyone loves Nine Doo, so every time he catches crabs and fish, people buy them back at a higher price to help him. have money to cover life” – Mr. Huynh Van Do.

Talking about the “classic battle”, Mr. Chin excitedly: “That day, my fishing boat was far away. The big grouper caught the hook and pulled the tight line. At this time, the waves were rushing, the wind was very strong, The boat swayed violently, I quickly tied a 6kg lead to my body and put on an air tank to quickly sink into the sea.My two hands followed the fishing line, diving to the bottom of the sea to catch fish.

Grouper caught in a hook lying in a rock cave. It took me about ten minutes to pull it out of the cave. At this time, some people on the boat pulled up the fishing line. The depth I went down at that time was about 30m. The grouper at that time weighed about 50kg. That sea is deep, there are sharks. After that round, I got the name Nine Doi. Currently, I still keep the grouper hook as a souvenir once in my life when I bet on big fish.”

For more than 30 years floating at sea, when he was old, he returned to Kien Luong district to live. Here, Mr. Chin Dou again dives alone to catch fish and crabs, but there was a time when he lost his direction and was swept away by the waves.

“A few years ago, due to my passion for diving and catching snails, I got lost far away. That day, the waves were big and the wind was strong. I heard the waves crashing against the offshore power poles, but I thought it was near the shore, so I went in that direction. I saw it more and more deeply. Fortunately, there was a sound of an engine passing by, so I listened to it and groped to the shore, it was already more than 8 o’clock at night,” recalled Mr. Chin Dou.

A small house located about 2km from the sea is where Mr. Chin Dou’s family lives. In front of the house, many poems he composed were printed, framed, and hung solemnly by his daughter.

Mr. Chin Dou laughed: “During the day, I hunt for crabs and snails. In my spare time, I listen to the radio and entertain myself by reading poems and telling stories. As he spoke, Mr. Chin read the poem Winter Rain composed by himself: ” Dad Forty years have made the dust rain / The last night is like a trip to sea / Without you, my dreams have been destroyed / In the afternoon, the clouds drift back to the island / Autumn does not come, I feel lonely / In a hundred years, there are only seasons Even though he could not go to school, Mr. Chin has composed more than 10 poems of all kinds, mainly based on inspiration after each sea trip.

Talking about his life, Mr. Chin Dou said: “When I was young, I also loved a girl from my hometown. But when I think back to the scene that I was blind, poor, didn’t have a career, I didn’t know what to do in the future, I couldn’t take care of myself. life for people, so I decided to stay there until now.”

Without a wife, Mr. Chin Dou has adopted a daughter named Vuong Thi Kim Vui since she was 10 years old. Ms. Vui is 36 years old this year and has a daughter who is in 5th grade.

Ms. Vui said that at first, her family was very worried about her father, afraid of being in danger, but gradually he got used to this job, and taking a day off was unbearable.

Having known Mr. Chin Dou for almost 6 years, Mr. Huynh Van Do (61 years old – living in the same locality) confided: “Life is difficult, every day he has to work hard to earn money to take care of his children and grandchildren. Besides diving work. Even though Mr. Chin doesn’t know how to use a phone, when he goes scuba diving, when it’s time to make an appointment with his daughter at any position, he will go out. Stand ashore at that position and wait for me to pick you up.”