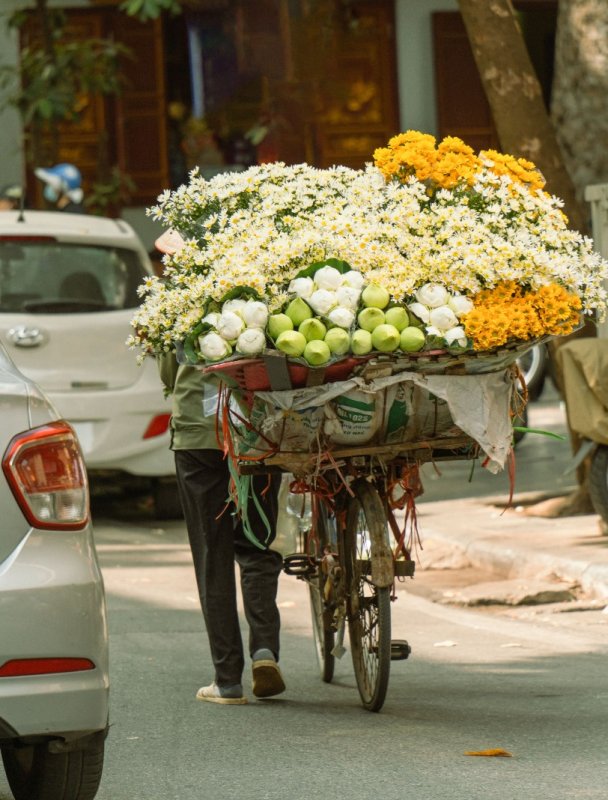 Thanks to its geographical location, the Vietnamese capital city of Hanoi witnesses contrastingly different weather conditions during the four seasons of the year. Autumn, from August to November, is seen as the most beautiful time of the year. It is a time of blue skies, a lovely nip in the air, blossoming milk flowers and delicious Hanoi-style rice nuggets sold by vendors on the street side.

The fall season brings a calm and gentle atmosphere to Hanoi which is loved by both locals and tourists alike. People wearing their best, and posing in different corners of the city such as Phan Dinh Phung Street, the West Lake or the Sword Lake area is a familiar sight that one can witness during this season. It is a fantastic feeling indeed to sip a cup of coffee when it is autumn in Hanoi.

Leaves change their colors, a sign that it is fall season Da Ke cakes, a typical street snack in Hanoi. It is a mixture of rice paper, green beans and white sugar. A street vendor sells fruits on a bicycle in Hanoi The Huc Bridge across the Sword Lake in Hanoi. It is a historic bridge in the capital city. Hanoi-style rice nuggets are a local specialty in autumn A guest buys flowers from a street vendor in Hanoi A city tour on a xich lo (cyclo) is a wonderful experience You must try Hanoi-style rice nuggets with bananas A famous ancient church in Hanoi that was built in 1884 Flowers such as daisy, lotus, lily or dahlia are seen in abundance in Hanoi during autumn The ancient ‘Tortoise Tower’ at the Sword Lake in autumn
RELATED NEWS
TAG:
Other news