Mr. Duong Quoc Thai (45 years old, living in Hau My Bac B commune, Cai Be district, Tien Giang province) is a farmer but is famous for winning many times in technical innovation competitions from the provincial to national level.

Mr. Thai said, because his parents were poor, he had to quit before he finished grade 6. For a long time after that, he went fishing in the Dong Thap Muoi area, then worked in mechanical workshops.

Realizing that the agricultural machine repair profession “has a future”, Mr. Thai has focused on learning to glean. In 2002, with learned experience and a capital of only 2 million VND($80), he bought a set of tools and then opened his own factory to repair explosives.

“I got an engineer’s degree, my wife gave me a license, and at first, there were only a few tools. Sewing machine repair doesn’t need a lot of capital, these days there’s a lot of work, so I can live,” said Mr. Thai happily.

After seven years of working in the field of agricultural machinery repair, Mr. Thai found that imported machinery often had problems because it was not designed to be fully compatible with domestic conditions. Therefore, Mr. Thai had the idea to switch from repairing to making machines to sell to people. 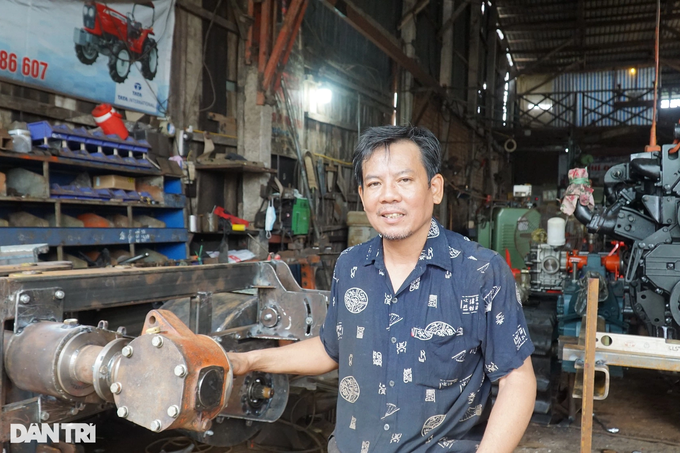 Mr. Thai in the details of the machine he invented (Photo: Nguyen Cuong).

“Agricultural machines in our country at that time were often imported from Korea and Japan. The machines were very expensive, and the quality was also very good, but they were designed to be used for dry fields and hard soil. Bring them back to their own country. use is both inefficient and error-prone.

Realizing that, I improved, based on the existing machine details, and redesigned it to suit my field. The quality of the product I make is about 8/10 imported machines, but the price is only 2/10, it’s effective to use, so people like to use it,” said Mr. Thai.

In 2009, his first patented product, an improved rotary, was shipped. The rotary has new features such as an enlarged angle of attack to help reduce the load on the machine, a large shovel, and low rotational speed, suitable for flooded soft fields.

“Whoever buys and uses it also praises, according to the customers’ opinion, because I have improved the productivity of the imported machine to double, it’s much better. When I heard that, I was very happy, when I took the device to the test, I won 3rd prize in the Innovation Contest. techniques organized by Tien Giang province,” said Mr. Thai. As an unqualified mechanic, Mr. Thai’s machine details do not have drawings. Mr. Thai’s manufacturing process is cutting, curving, fixing and repeating until it fits.

“Some products I made for 3 months, some took 2 years to finish. Goods are shipped, customers have any comments, I record them and then fix them again, until no one criticizes anymore”, Mr. Thai shared. shall.

After the first success, so far Mr. Thai invented many valuable machine details such as trenching the machine, a machine for threading pipes through unbroken concrete… Especially, in 2016, Mr. Thai has improved the embankment machine, products Products are not only sold domestically but also exported to foreign countries.

“The embankment machine, I sell it to people, only costs from 27 to 45 million dong, when they bring it back to us, they earn an average of more than 200 million dongs ($8,000)before they have to start maintenance. The machines I’ve sold since 2016 until now are still operating normally.($1=25,000 VND)

On average, the machine can build about 10,000m of shore every day, equal to 40 people working hard,” said Mr. Thai. 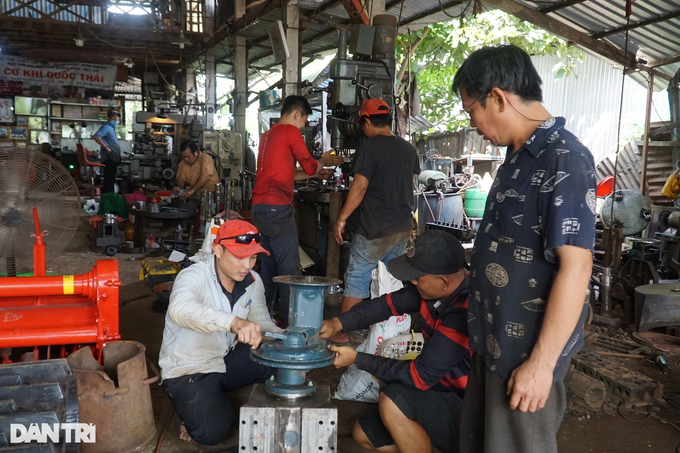 Mr. Thai’s improved embankment machine is not only praised by farmers, but also highly appreciated by experts, and has been granted an exclusive certificate. The machine represented Tien Giang to compete at the 15th National Technical Innovation Contest and was honored to win a consolation prize.

“Up to now, the product of the embankment machine has been improved by me 5 times, over 70% of the details that make up the product are made by me at the factory. In the future, this percentage will be even higher. Currently, I can ship more than 1 unit per month. 10 machines, sold in Hanoi, the Red River Delta, Phu Yen, Binh Dinh and throughout the southern provinces. Many customers from some countries also come to buy products, “said Mr. Thai.

Starting with only a set of wrenches, Mr. Thai now has a large workshop with many modern machines, employing 8 regular workers with a salary of 12 million VND per month. Mr. Thai’s products have greatly contributed to the country’s agricultural mechanization.

With his contributions, Mr. Thai has been awarded many prestigious awards, including twice being honored by the Central Committee of the Vietnam Farmers’ Association as “Excellent Vietnamese Farmers” in 2015 and 2022