HANOI – An Indian couple dropped their phone in a taxi but couldn’t remember which company it was, so they asked other drivers for help and were helped to find it after three hours, on the morning of October 28.

Tran Ngoc Thanh, 35 years old, a technology taxi driver, said that around 8:30 a.m. on October 28, he was carrying passengers across Dien Bien Phu Street (Ba Dinh District) when he met an Indian couple waving back. Because he was carrying passengers, he didn’t stop but saw the woman very confused, her face was almost about to cry, it seemed that she had an urgent need for help, so when she finished returning the passenger, she returned to ask. 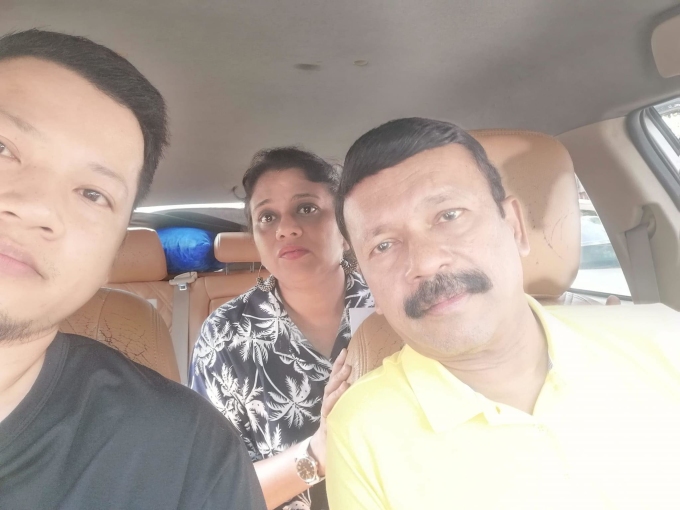 Tran Ngoc Thanh (top row, left) with an Indian couple on the morning of October 28 while searching for a lost phone. Photo: Character provided

Not fluent in English, the driver used translation software to know that, around 7:30 a.m., when taking a technology taxi from Nha Chung Street (Hoan Kiem District) to Hanoi Flag Tower (Ba Dinh District), the two guests typed. dropped a mobile phone with a lot of important information and documents stored in it. However, the couple did not remember the number plate of the taxi they had just taken. Desperate, they waved all cars with yellow license plates or taxis with crests of companies passing through Dien Bien Phu to ask questions, hoping for help.

Knowing that this couple would return home on the afternoon of October 28, Thanh took pictures, posted information on driver groups, and then took the Indian couple to the office of the car company for help.

“Although there is not much hope because the customer does not remember the driver’s information, their phone is on silent mode, calling a few dozen calls but no one hears, but I still try and hope to help them,” Thanh said.

After an hour of posting information, Mr. Vu Van Manh, 32 years old, the driver who brought the Indian couple, contacted and announced that he had picked up the forgotten phone. Manh arranged to meet at noon on the same day at Cau Giay park (Cau Giay district) to return it because he was carrying passengers to Noi Bai airport at that time.

“The customer who left the phone silent fell into the gap between the driver’s seat and the passenger seat, so no one knew. It was only when I asked my colleague and learned that someone posted on the group of drivers looking for a phone and immediately contacted me. with Mr. Thanh to report the news”, Mr. Manh explained. Since the Indian couple got off the car, he has carried four other customers but no one noticed the dropped phone.

After three hours of asking for help from the Vietnamese community, the Indian couple got their property back intact. They were very appreciative and always thanked the two male drivers who enthusiastically helped. 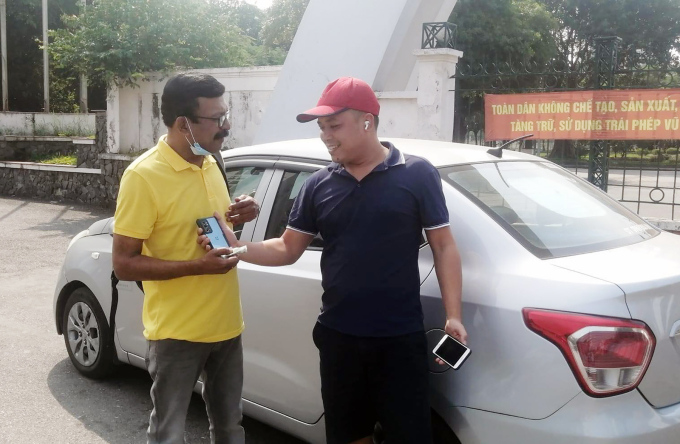 Driver Vu Van Manh returned the phone to the person who dropped it at Cau Giay Park, at noon on October 28. Photo: Character provided

Many times, helped customers find lost items during 10 years of working as a driver, but this is the first time that Mr. Thanh helps foreign customers get their items back after a few hours of posting.

“Today’s incident makes me feel very happy because I can spread good deeds to the community. I don’t want to be famous or show off, I just want the lost people to find their things and leave a good impression on the Vietnamese people in the future. foreign tourists,” the 35-year-old male driver confided.

The story of the two drivers was then shared on social networks, immediately attracting tens of thousands of comments expressing admiration for the beautiful action. Thanh added that many people he didn’t know also sent congratulatory messages and thanked him as well as thanked Mr. Manh.