A family in Ha Tinh has successfully raised hundreds of sturgeon in a renovated pond in the border forest area bordering Laos. With a selling price of 10-20$/kg, they have a high income.

The successful model of raising this specialty fish in the land known as the “fire pan” of the Central region makes the farm owner and many people happy. 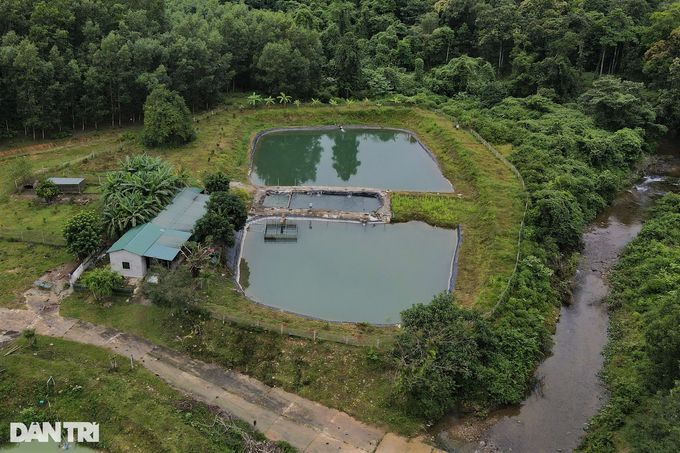 Mr. Tan’s sturgeon farm is located in the middle of the forest and next to the stream (Photo: Duong Nguyen).

Mr. Tan’s sturgeon farm is about 2,000m2 wide, nestled in the middle of a green forest, next to Rao Trinh stream, in Phu Lam village, Phu Gia commune. This place is nearly 30km from the center of Huong Khe town, bordering with Laos. 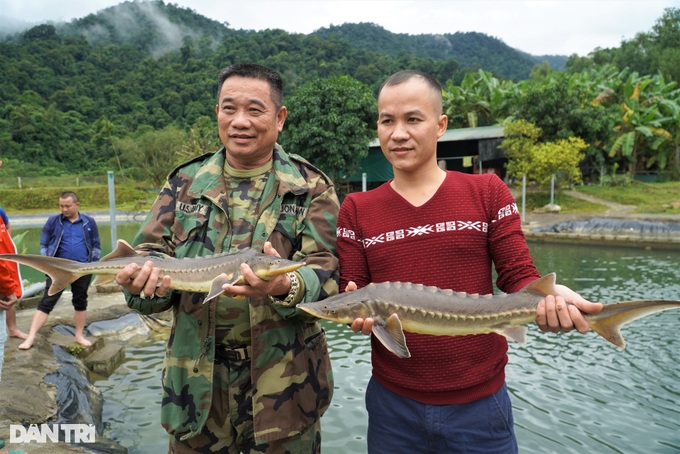 Mr. Tan (left) and his son are happy because of the successful trial farming of the sturgeon (Photo: Duong Nguyen).

In order to improve meals during his stay, Mr. Tan and other forest protection workers built huts, planted fruit trees and renovated a natural fishpond with a variety of species such as carp, carp, and sesame. The protection group also raised wild boars, cows and goats.

However, the farming of these fishes was not successful because of the cold weather conditions. The raising of some other animals also had to be stopped because Mr. Tan noticed that they destroyed crops. 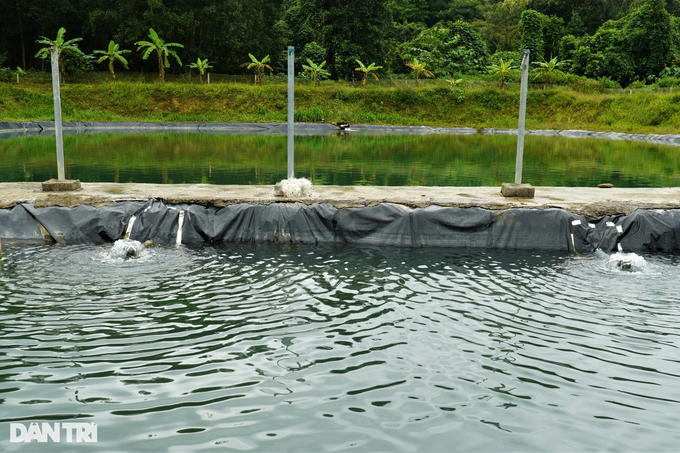 In 2021, through the Internet and friends in Sapa town (Lao Cai province) and Lam Dong province, Mr. Tan researched and learned about the sturgeon farming model.

Thinking of doing it, Mr. Tan asked the local government for permission to experiment with new fish species. He also invited technical staff in aquaculture in Ha Tinh province to assess the water environment , sanitary and natural conditions. 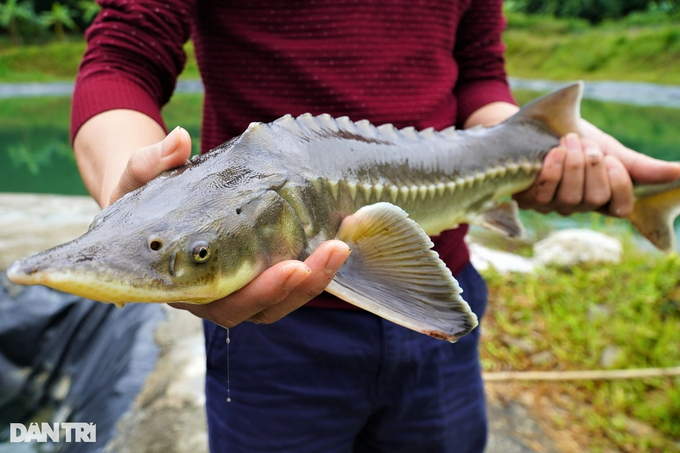 Sturgeon is a high-class specialty because of its high nutritional value (Photo: Duong Nguyen).

When there were favorable results here for sturgeon farming, Mr. Tan bravely spent nearly 600 million VND to renovate the ponds such as rebuilding the banks and spreading tarpaulins.

The sturgeon farming model has a circulating water system. Water flows continuously from Rao Trinh slot into ponds and lakes, both to ensure oxygen for fish, and to flow out through underground pipes to keep the environment clean. 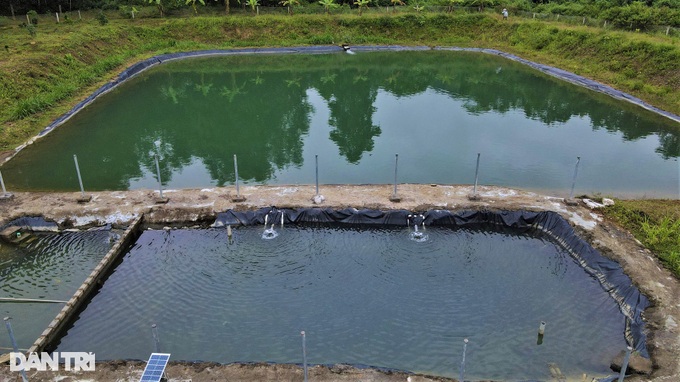 The source of water and fish food is always focused on Mr. Tan (Photo: Duong Nguyen). 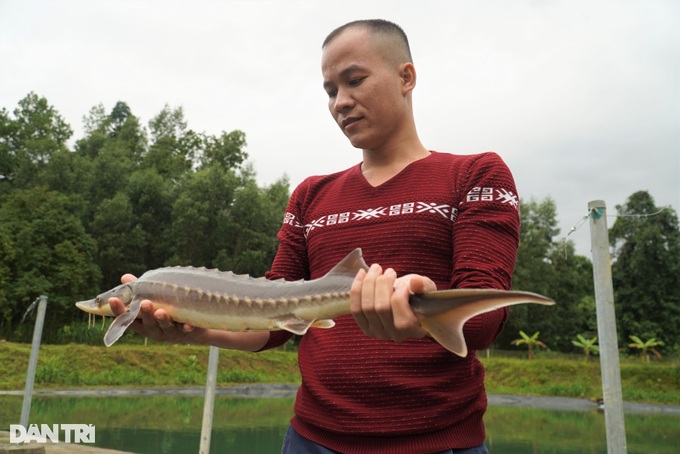 Adult sturgeon has a weight of about 2kg each, more than 50cm long (Photo: Duong Nguyen).

In October 2021, Mr. Tan stocked about 500 breeding animals, each 8-10cm long. According to Mr. Tan, sturgeon live on the bottom, eat submerged, food when young is bran at a high price in the market. When the sturgeon was big, he fed them bran from minced trash fish to make the meat firm and delicious.

“The first time I raised my fish, I also felt worried. While raising me, I continued to learn from experience to ensure that the fishes grow well and avoid diseases,” he shared. 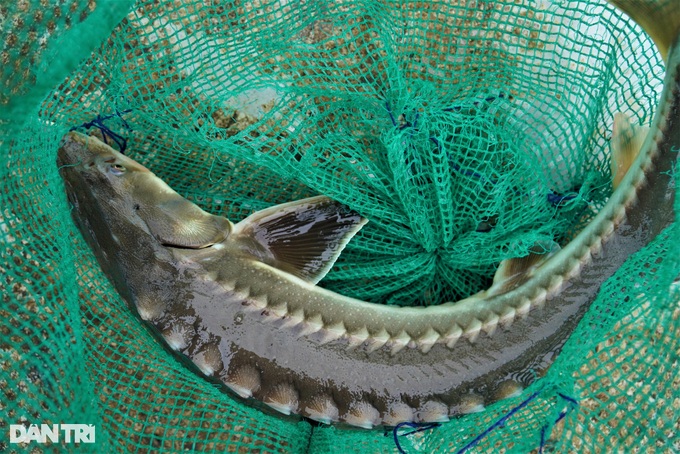 This is a specialty fish with high economic value (Photo: Duong Nguyen).

And after nearly a year of trial farming, hundreds of sturgeon fish have grown well, each weighing around 2kg, and more than 50cm long. 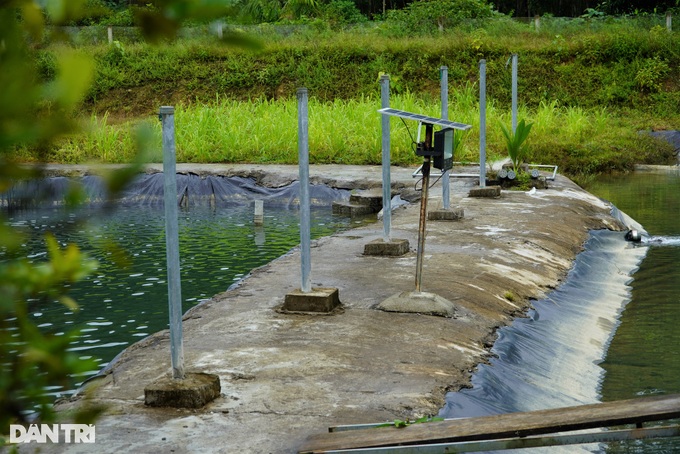 Mr. Tan has invested hundreds of millions of dong to rebuild the bank and spread the canvas (Photo: Duong Nguyen).

After the initial success, in the coming time, Mr. Tan plans to continue raising 5,000 breeds and will double it if it can be linked to the northern market for consumption.

According to Mr. Duong Ngoc Hoang, Head of the Department of Agriculture and Rural Development of Huong Khe district, the experimental sturgeon farming model of Mr. Tan’s family initially achieved quite good results. In the coming time, this locality will reevaluate the model so that it can expand and help people in terms of the consumption market. 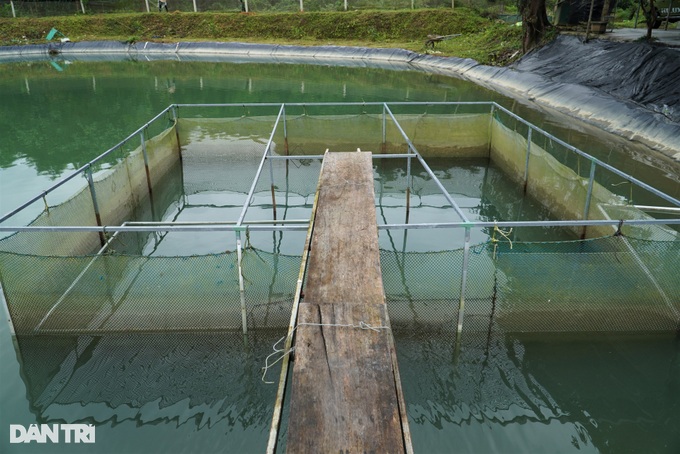 In the coming time, Mr. Tan is expected to continue to raise 5,000 seeds and will double if it can be linked with the northern market for consumption (Photo: Duong Nguyen).

Sturgeon is one of the oldest extant fish genera, they are native to the waters of Europe, Asia, North America and most famously in Russia. In the UK, sturgeon is also known as “the queen’s fish”.

This fish has a long body, a horizontal, pointed snout, and the skeleton is made of soft cartilage tissue, so when processing, it can eat bones.

In Vietnam, sturgeon is mainly raised in Sapa and Lam Dong… The meat of this fish is white and pink, with yellow veins in the slices, especially, the meat is very fragrant and tough. This is a high-class specialty fish because of its high nutritional value, especially good for pregnant women, children and the elderly.