Kites shaped like squid, fish and even flute kites with eye-catching colors and huge sizes were pulled high above Ha Tien sea this afternoon, making visitors “full of eyes”.

On the afternoon of October 22, at Back beach of the Mui Nai tourist area, the People’s Committee of Ha Tien city (Kien Giang province) held a kite flying show on the occasion of the traditional festival to celebrate the 259th anniversary of the death of Mrs. 1763 – 2022).

This is the first time Ha Tien city has organized a kite show on the sea with the theme “Colors of the sea”, attracting thousands of people and tourists to visit and enjoy.

In addition to displaying kite-shaped art such as flute kites, phoenix kites, peacocks, butterflies, and goldfish… with a wingspan of 1.5-3m, the organizers also prepared materials for the students. and visitors make 1,000 kites themselves to fly along the beach.

The highlight of the program is the parade of giant kites in the shape of birds, fish, and squid… which are dragged and dropped by 10 canoes on the sea.

Duong Thi Nhu Y – a tourist from Ninh Kieu district, Can Tho city – said that she had only seen kites flying in the fields so she was very impressed when she first saw the giant kites being pulled by canoes on the sea.

“My family went to Ha Tien today to play and happened to see a colorful kite show on the sea. The kite is pulled by the canoeists very professionally. I and the tourists here love to see it”, Ms. Y said.

Ms. Nguyen Thi Minh Trang – Head of the Culture and Information Department of Ha Tien City – said that the traditional festival to celebrate the 259th anniversary of the death of Mrs. Mac Mi Co this year also includes many activities such as the exchange of southern amateur music, a pavilion. food, folk games, chess, chess…

According to legend, Mrs. Mac Mi Co was famous during her life as a virtuous person, very helpful to the poor, so after her death, the local people respected and worshiped her and held an annual celebration of the death anniversary (also known as the Feast of the Dead). aunt’s death anniversary). 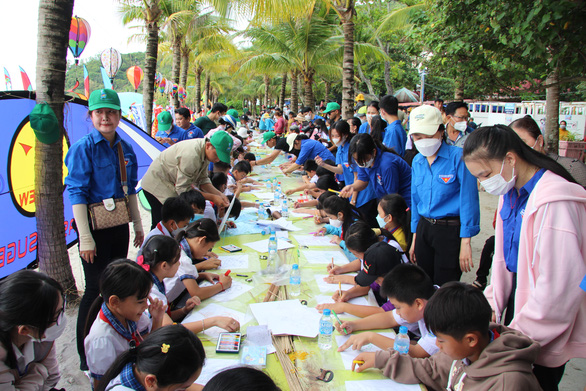 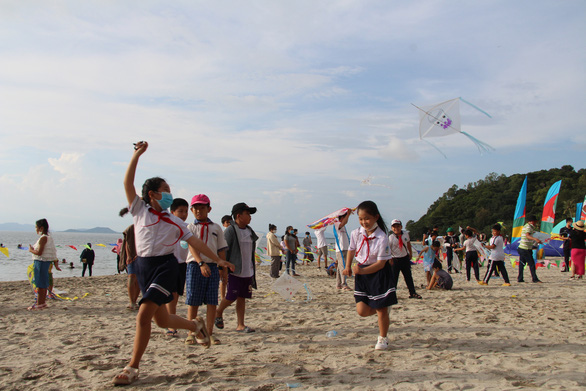 The kite show on the sea is not only pleasing to the eyes of tourists, but also a meaningful playground for local school children – Photo: C.CONG 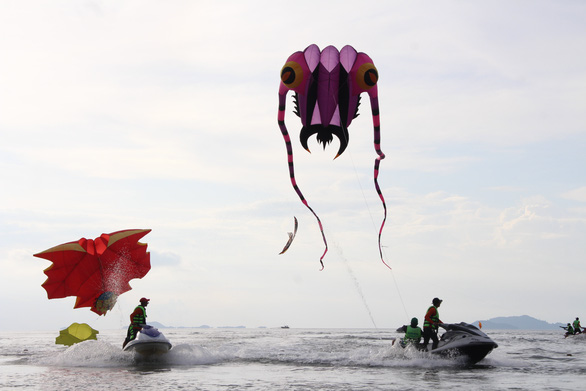 The canoe pulls “giant” kites flying over the sea to create a beautiful scene – Photo: C.CONG 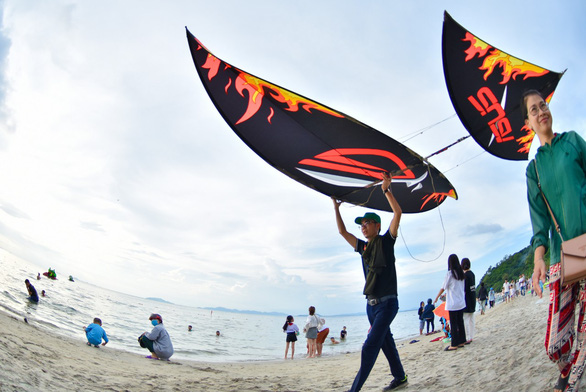 The flute kite when flying in the air makes a very pleasant sound – Photo: H. THUAN